If you are looking for some funny insect jokes, look no further. Below you will find a collect of 61 insect jokes that will keep you laughing. These jokes include jokes about fleas, flies, spiders, and more! 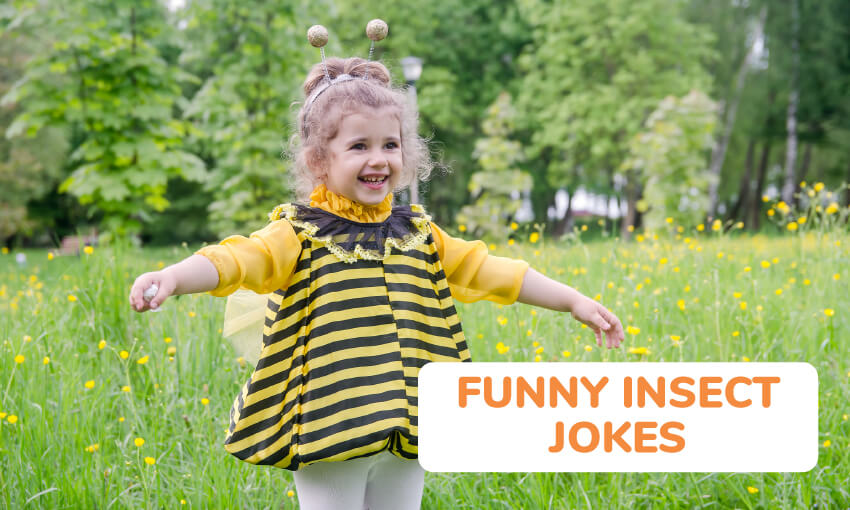 Why was the centipede dropped from the insect football team?
He took too long to put his boots on!

What does a caterpillar do on New Years Day?
Turns over a new leaf!

What pillar doesn’t need holding up?
A caterpillar!

What do you get if you cross a centipede and a chicken?
Enough drumsticks to feed an army!

What is worse than an alligator with toothache?
A centipede with athlete’s foot!

Why wouldn’t they let the butterfly into the dance?
Because it was a moth ball!

What’s smaller than an ant’s mouth?
An ant’s dinner!

Where would you put an injured insect?
In an antbulance!

How do we know that insects are so clever?
Because they always know when your eating outside!

What do insects learn at school?
Mothmatics

What’s the biggest moth in the world?
A mammoth!

Why is it better to be a grasshopper than a cricket?
Because grasshoppers can play cricket but crickets can’t play grasshopper!

What is green and can jump a mile in a minute?
A grasshopper with hiccups!

What did one firefly say to the other?
Got to glow now!

Why was the centipede late?
Because he was playing “This little Piggy” with his baby brother!

What do you get if you cross a centipede and a parrot?
A walkie talkie!

What is the definition of a caterpillar?
A worm in a fur coat!

What do you call a cheerful flea?
A hop-timist!

What did the clean dog say to the insect?
Long time no flea!

What did one flea say to the other after a night out?
Shall we walk home or take a dog?

What did the romantic flea say?
I love you aw-flea!

Why did the stupid boy wear a turtleneck sweater?
To hide his flea collar!

How to fleas travel?
Itch hiking!

What is the difference between a flea bitten dog and a bored visitor?
Ones going to itch and the other is itching to go!

How do you find where a flea has bitten you?
Start from scratch!

What is a flea’s favorite book?
The itch-hikers guide to the galaxy!

Two fleas where running across the top of a cereal packet? “Why are we running so fast?” said one.
Because it says “Tear along the dotted line.”

What is the difference between fleas and dogs?
Dogs can have fleas but fleas can’t have dogs!

What do you call a flea that lives in an idiots ear?
A space invader!

What is the most faithful insect?
A flea, once they find someone they like they stick to them!

Why did the flea fail his exams?
He wasn’t up to scratch!

How does a flea get from place to place?
By itch-iking!

What did one flea say to the other flea?
Shall we walk or take the dog?

What goes “snap, crackle and pop”?
A firefly with a short circuit!

How do fireflies start a race?
Ready steady glow!

What did one firefly say to the other?
Got to glow now!

Why did the firefly keep stealing things?
He was light fingered!

If there are 5 flies in the kitchen,how do you know which one is the American Football player?
The one in the sugar bowl! 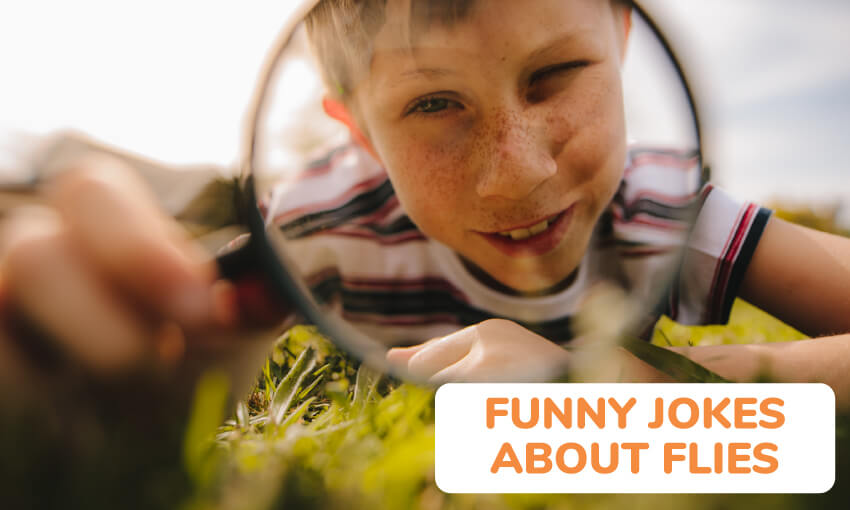 What is the difference between a fly and a bird?
A bird can fly but a fly can’t bird!

How do you keep flies out of the kitchen?
Put a pile of manure in the living room!

What has four wheels and flies?
A rubbish bin.

Why were the flies playing football in the saucer?
They where playing for the cup!

Why did the fly fly?
Because the spider spied ‘er! 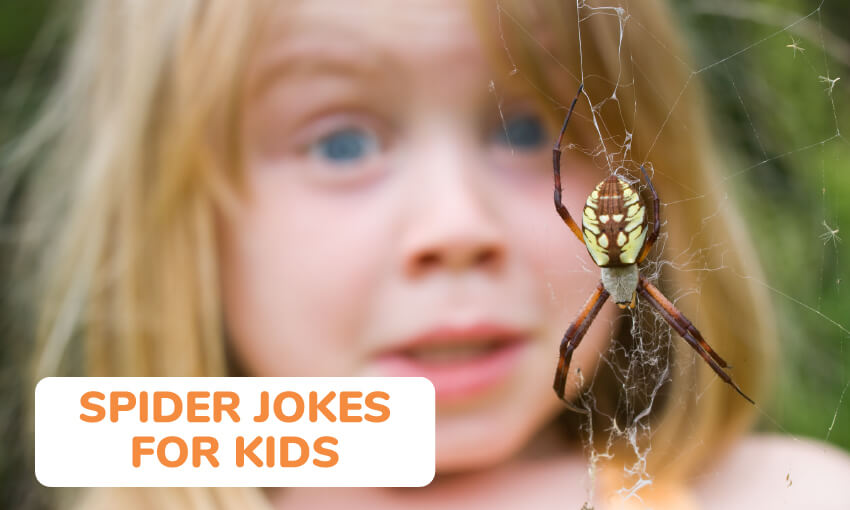 What do you call 100 spiders on a tire?
A spinning wheel!

What did the spider say when he broke his new web?
Darn it!

What is red and dangerous?
Strawberry and tarantula jelly!

What did the wife spider say to her husband when he tried to explain why he was late?
Your spinning me a yarn here!

What is a spiders favorite TV show?
The newly web game!

Why are spiders like tops?
They are always spinning!

What do you get if you cross a tarantula with a rose?
I’m not sure, but I wouldn’t try smelling it!

What do you call a big Irish spider?
Paddy long legs!

Why did the spider buy a car?
So he could take it out for a spin!

What does a spider do when he gets angry?
He goes up the wall!

What do you get if you cross a spider and an elephant?
I’m not sure, but if you see one walking across the ceiling then run before it collapses!

What did the spider say to the fly?
We’re getting married do you want to come to the webbing?

Why are spiders good swimmers?
They have webbed feet!

How do you spot a modern spider?
He doesn’t have a web he had a website!

What kind of doctors are like spiders?
Spin doctors!

What happened when the chef found a daddy long legs in the salad?
It became a daddy short legs! 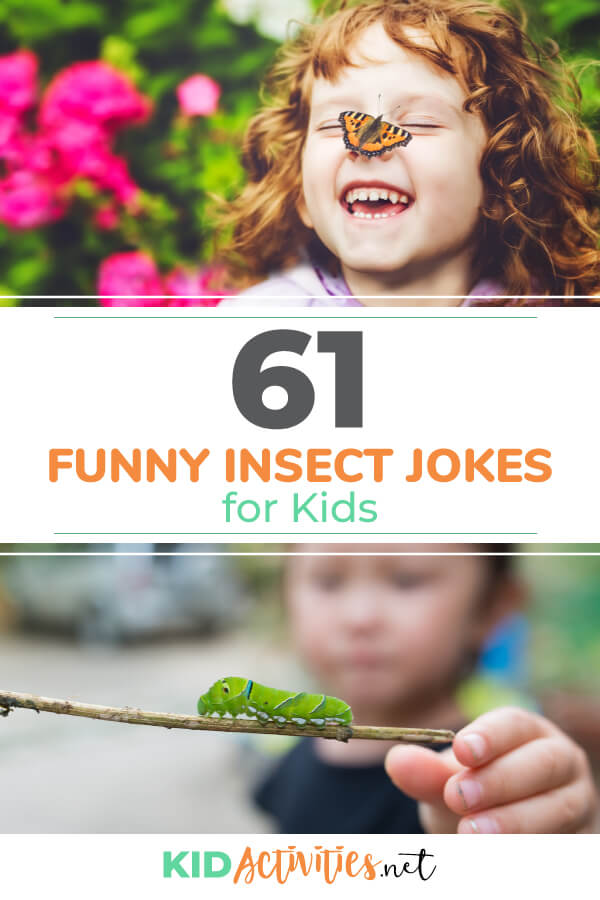