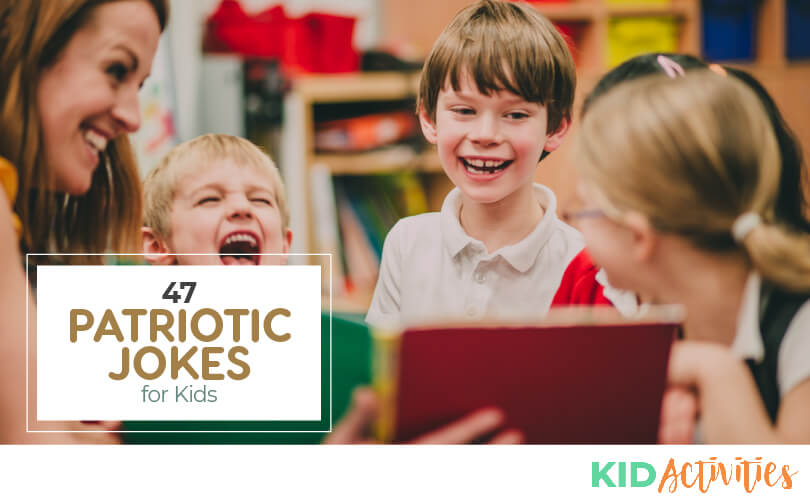 These jokes are clean and appropriate for kids of all ages. If you are a history teacher, these will be great to incorporate into your history lessons.

You can use these as some good lunchbox jokes as well. If you know your child is studying a certain time or person in history, find an accompanying joke and include it with their lunch. This will give them a good chuckle in the middle of the day.

1. Why did the duck say “Bang!”?
Because he was a firequacker!

2. What protest by a group of dogs occurred in 1773?
The Boston Flea Party!

3. What did one flag say to the other flag?
Nothing. It just waved!

4. Where did George Washington buy his hatchet?
At the chopping mall!

5. Why did Paul Revere ride his horse from Boston to Lexington?
Because the horse was too heavy to carry!

6. Why did the British cross the Atlantic?
To get to the other tide!

7. What would you get if you crossed a patriot with a small curly-haired dog?
Yankee Poodle!

8. Did you hear the one about the Liberty Bell?
Yeah, it cracked me up!

9. What would you get if you crossed George Washington with cattle feed?
The Fodder of Our Country!

10. What’s red, white, blue, and almost as ugly as a dog?
A revolutionary warthog!

11. What happened as a result of the Stamp Act?
The Americans licked the British!

13. Teacher: “Which son of old Virginia wrote the Declaration of Independence?”
Student: “I think it was Thomas Jeffer’s son.”

14. What did King George think of the American colonists?
He thought they were revolting!

16. Why were the early American settlers like ants?
Because they lived in colonies.

17. What famous pig signed the Declaration of Independence?
John HAMcock!

18. What would you get if you crossed the American national bird with Snoopy?
A bald beagle!

19. What would you get if you crossed a colonial hairpiece with a teepee?
A powdered wigwam!

21. What did the visitor say as he left the Statue of Liberty?
Keep in torch!”

22. What’s big, cracked, and carries your luggage?
The Liberty Bellhop!

24. Did you hear about the cartoonist in the Continental Army?
He was a Yankee doodler!

25. What would you get if you crossed a monster with Yankee Doodle?
Yankee Doofus!

27. What kind of tea did the American colonists thirst for?
Liberty!

28. What was General Washington’s favorite tree?
The infantry!

29. Which colonists told the most jokes?
Punsylvanians!

30. What would you get if you crossed Washington’s home with nasty insects?
Mt. Vermin!

31. What did a patriot put on his dry skin?
Revo-lotion!

33. Which one of Washington’s officers had the best sense of humor?
Laughayette!

34. What is a hungry boy’s favorite picnic event?
The snack race!

35. “How was the food at the Fourth of July picnic?
“The hot dogs were bad and the brats were wurst!”

36. What did Washington say as he crossed the Delaware?
“Next time I’m going to reserve a seat!”

38. What has four legs, a shiny nose, and fought for England?
Rudolph the Redcoat Reindeer!

39. What march would you play at a jungle parade?
“Tarzan Stripes Forever”!

40. What would you get if you crossed a monster with a redcoat?
A bigger target.

41. Why did the British soldiers wear red coats?
So they could hide in the tomatoes.

42. Why is the Liberty Bell like a dropped Easter egg?
Because they’re both cracked!

44. How is a healthy person like the United States?
They both have good constitutions!

45. What has feathers, webbed feet, and certain inalienable rights?
The Ducklaration of Independence!

46. What did Paul Revere say at the end of his ride?
“I gotta get a softer saddle!”

47. What was the craziest battle of the Revolutionary War?
The Battle of Bonkers Hill.

We hope you have enjoyed these American history jokes and red, white, and blue jokes for kids. Which one was your favorite? Who did you share them with?

If you want more funny jokes, check out our other joke categories below.