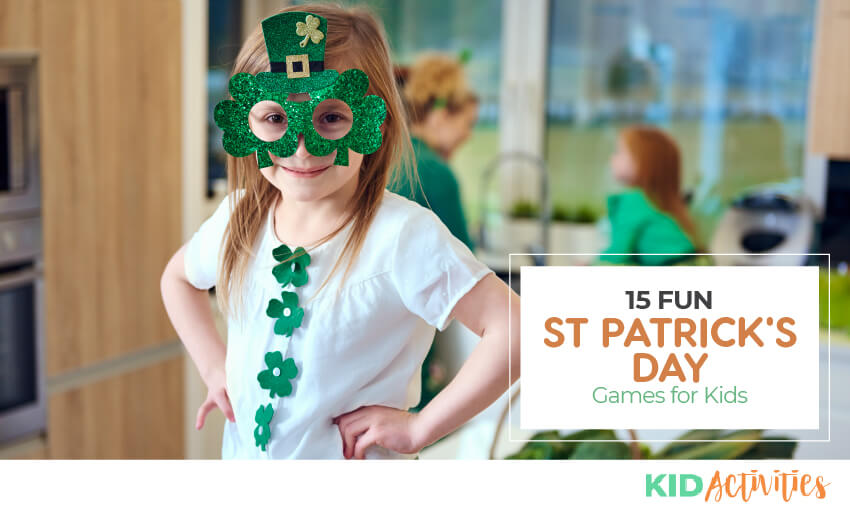 Count your lucky charms because you’ve just stumbled across a pot of gold! These St. Patrick’s day games for kids make for a heap of fun. Use them at home or for a holiday classroom party.

(This game can also be adapted to other themes such as Valentine’s Day– with hearts instead of shamrocks.

Challenge friends to a race of the minds.

A traditional game of hot potato using a real potato.

Hurley is an old game that can be traced back to ancient Rome and has been played throughout Great Britain for hundreds of years. However, Hurley is popular in Ireland, and it is believed to be the ancient ancestor of modern football.

Played like regular bingo but with St Patrick’s Day-themed bingo cards. Buy some on Amazon or print some off.

This fun St Patricks Day game can be played at the classroom party or family game night.

The Object of the Game

Be the player that ends up with the highest coin value at the end of the game. Through a combination of dice rolling, the draw of the cards, and luck, is how you will obtain coins. Check out this detailed explanation of how to play Luck O’ The Dice.

This is one of the kid’s favorite St Patrick’s Day party games and it makes a great throwing game too.

The prize could be some chocolate gold coins. Yum!

What kid doesn’t love a good scavenger hunt? The easiest way to do this is to cut out some shamrock shapes or buy some premade shamrock cutouts. Once you have the shamrocks, write riddles or clues on them. The clues will lead them to their next treasure. Gold chocolate coins work great for this. Each clue could lead them to a single chocolate gold coin and then the final clue could leam them to a large basket or “pot of gold.” Fill the pot with fun St. Patrick’s Day treats and gifts.

Thanks for checking out our St. Patrick’s Day games. We hope this makes your classroom celebration a fun and memorable day for the kids.