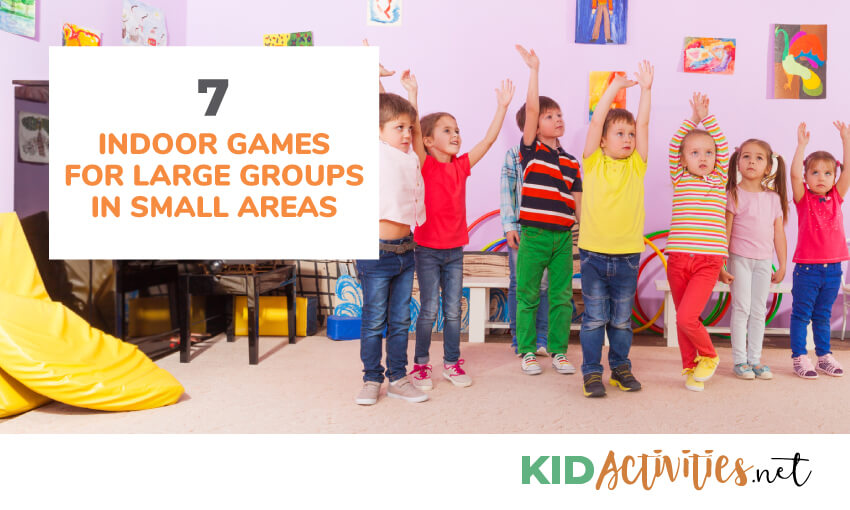 Keeping a large group of kids entertained in a small space can be a challenging prospect, as any parent or educator knows. However, if you organize a game to pass the time, you’re providing them with mental and physical stimulation—with the added bonus of being able to keep an eye on everyone.

If you’ve always hewed to the belief that indoor games should only be considered in large spaces like the gymnasium, perhaps it’s time to rethink your strategy. To help you get started, here’s a list of seven indoor games for large groups in small areas. 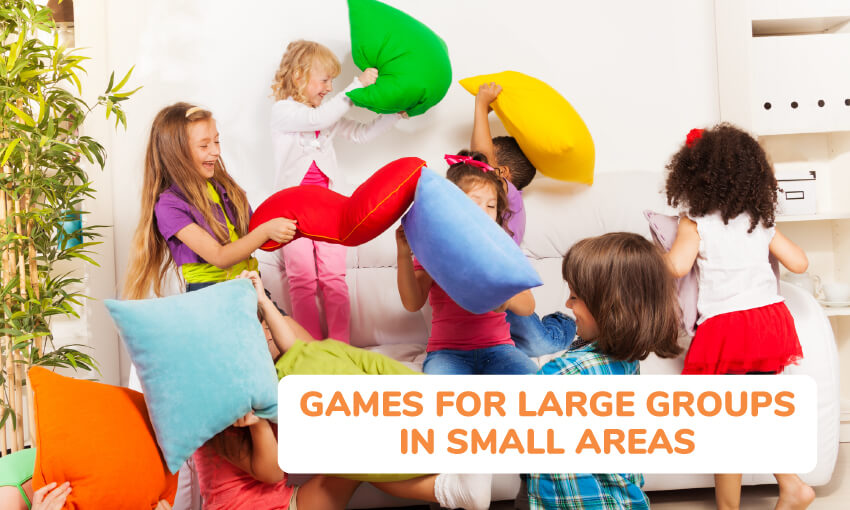 This high-energy game is sort of like an upside-down version of the game jacks, in which players attempt to pick up as many jacks as they can before a bounced ball can return to the playing surface. Unlike jacks, though, Toss ‘n Clap allows the kids to get physical, which makes it a great tool for improving coordination as well as teamwork.

To play, you’ll need a volleyball or a similar soft, large ball. Gather players in a circle and hand the ball to one of them to start. This first player should throw the ball in the air and attempt to clap once before catching it. He or she will then pass to the next player, who will attempt the same, and so on. Should any of the players fail to catch the ball, every player should immediately do five jumping jacks. The player who dropped the ball will then drop out of the game, thereby shrinking the circle.

Once every player has had a chance to try to catch the ball after a single clap, the ball returns to the first player, who then attempts to catch it after two claps. Play continues in this manner, raising the number of claps in succession. The player who manages to clap the most times by the end of the game is the winner!

All My Neighbors is similar in structure to musical chairs, only it encourages more creativity on the part of the players. . The game requires little advance preparation, and is sure to be enjoyed by kids of all ages. All you need is a circle of chairs, and a group of players (the more the merrier!).

Count out how many players you have, and use this number less one to form your chair circle. (For example, if you have nine players, make a circle of eight chairs.) Choose one player to act as the “caller,” and have him or her stand in the center of the circle while the rest of the group is seated.

To begin play, the caller should yell out a single characteristic that he or she shares with at least one other person in the circle, beginning with the words “all my neighbors.” For example, if the caller is wearing blue jeans, he or she can call out “All my neighbors wearing blue jeans.” At this point, everyone in blue jeans (including the caller) will scramble to find a new seat somewhere in the circle. The player left standing then becomes the new caller, and so on.

For this game, you’ll need several hula hoops, as well as enough space for each one to be placed on the floor at some distance from one another. A school hallway is the best venue for Hula Hoop Hop, but it can be enjoyed in the classroom if need be.

Once you’ve scattered the hula hoops across the floor (none of them should be allowed to touch one another), choose an exercise or other form of movement that the players will need to follow (such as hopping on one foot). When you call out the word “go,” players should begin to traverse the playing space using the chosen movement, taking care not to touch any of the hula hoops as they pass.

Next, call out a number between two and four (the number may vary depending on the size of your group). The players will then stop and try to climb inside the nearest hoop, filling it with the same amount of players as the number called. When the hoop is full of the correct number of players, the ones inside should raise the hoop to waist level to indicate that this one is off-limits.

If you’d like to incorporate a little min-lesson into your small area games session, try this easy exercise out on the group. It’s fast-paced—almost like rock-paper-scissors—but the kids will be honing their math skills at the same time.

Divide the players into groups of two, with one standing and one sitting down. If you’re in a classroom, they can perform the exercise at their desks; otherwise, one can sit on the floor with the other standing above. Have them determine which player is going to be “odd,” and which one will be “even.”

When you call out “add ’em,” the players will put up any number of fingers from one hand (to keep the numbers between one and five). Each team should then add up the total number of fingers that they’ve displayed to determine whether they’ve come up with an even or an odd number. If it’s even, the player who was designated “even” wins, and vice versa. At this point, the winners go on to seek new partners from the ones who have remained seated.

If your group is made up of older children who would find this exercise too easy, switch it up by changing the name to “Multiply.” Follow the same rules as above, but have them multiply the numbers shown on their fingers rather than adding them.

This is a great activity for indoor recess. Families might also want to try it out on rainy days. It provides a great workout with a minimum of noise—a win-win for the adults in the vicinity!

To play, you’ll need about a half-dozen beanbags. You can also substitute smaller Nerf balls for this—anything that can be easily tossed across a circle without causing harm to the players would work. The balls don’t even have to match one another; in fact, having a number of different objects in play can add to the fun.

Form players into a circle and instruct them to remain silent during play. If they talk, they’ll be immediately disqualified from the game. Hand one of the beanbags to a player and have them toss it across the circle to another player. If he or she catches it, they’ll continue the game by tossing it to someone else, and so on. Any player who fails to catch the beanbag will have to leave the circle, along with anyone who talks during play.

As the game progresses, make it more of a challenge by gradually introducing more beanbags. The winner is the player who remains in the “circle” when all of the others have been forced to drop out.

As small area games go, this one requires a bit more room to maneuver. You’ll also need nine hula hoops, six beanbags (two sets of three in different colors), two batons (wooden spoons can stand in for these), and two line markers (plastic cones work well, but you can substitute any stationary object).


To begin, divide players into two equal teams. If you have an equal number of boys and girls, you can divide them up this way. Otherwise, simply count off. Set up the hula hoops so that there are three down and three across (like a tic-tac-toe board). Have the players line up with their respective teams behind their line markers, about 20 feet away from the makeshift board. Put three beanbags of like color in front of each line, along with one baton.

The player in the starting position of each line should then pick up their baton and a beanbag, then make their way to the hula hoop board as fast as they can to place their beanbag in whichever hoop they choose. They’ll then return to the line and hand the baton to the next player, who will repeat the move in an attempt to get their three beanbags all in a row before the next team does. Once all the beanbags have been placed, they can be moved around by the subsequent team members until there’s a winner.

To make it more exciting, you can have the players skip or hop to the board instead of simply running. Alternatively, they can attempt to toss the beanbags onto the board from a distance.

This cooperative game can be enjoyed by players of any age, but it’s so simple that older children are bound to become bored more quickly.

First, you’ll need a number of small playing surfaces—towels, mats or hula hoops all work well. Divide the group into smaller teams (size depends on how large your playing surfaces are, as well as how many players you have). Each team should then attempt to get every one of its members to fit inside the designated playing surface for at least 10 seconds. If this is too easy on the first attempt, you can up the ante by either making the playing surface smaller, or increasing the number of players on each team.

With a little imagination, you could likely come up with your own variations on these indoor games for large groups in small areas. If you have enough ideas in your arsenal, your group will never run out of things to do when the weather forces you all to remain inside. Have fun!

Looking for more game ideas? Learn to play protect the president and the game traffic jam. 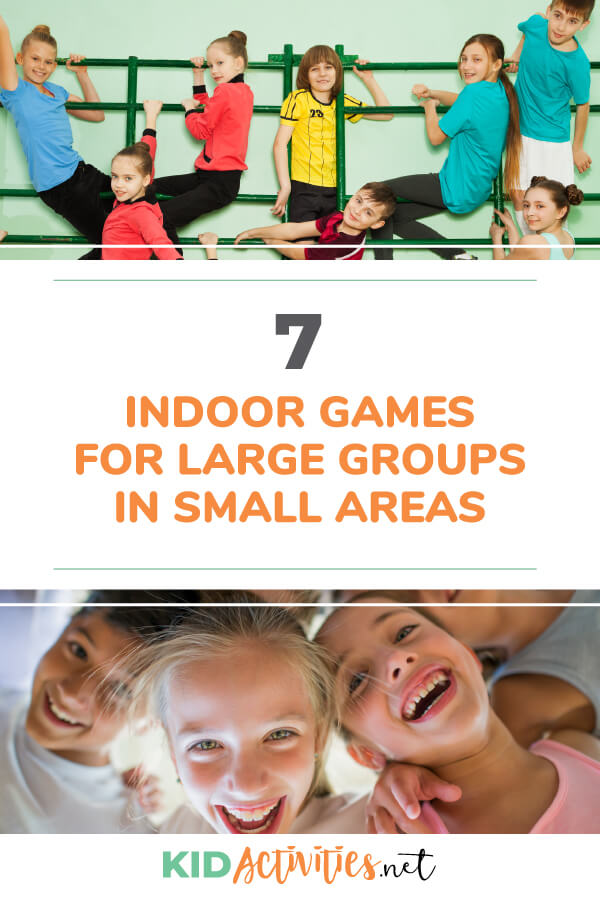