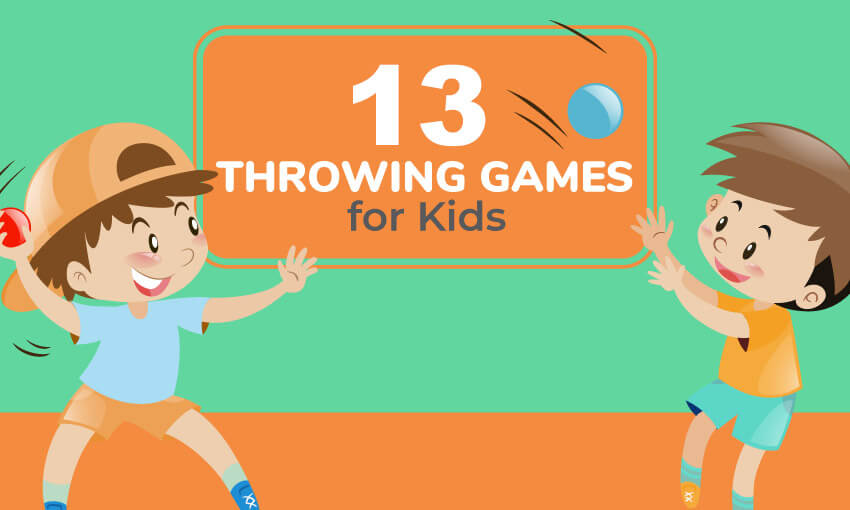 Throwing is a fundamental part of many different activities and sports.  That’s why children need to learn how to throw as soon as possible, so they can participate in these activities with their friends.  Once a child has learned to throw accurately, they can begin to play many types of sports and activities including dodgeball, bocce ball and cricket.  It massively increases the number of fun activities that are available to them.

However, like most mechanical skills, it does take a lot of practice to become a skilled thrower.  Most children will also require some instruction from a teacher or parent before they can throw, catch, and bounce balls accurately.

One of the easiest ways to help children become proficient throwers is by having them play throwing games.  They will have a lot of fun with their friends while practicing their technique and seeing how other children throw.  Throwing games will also help them improve their hand eye coordination, fine motor skills, and capacity for teamwork.

To help you integrate throwing games into playtime, this guide will share 13 throwing games for kids.  We’ll also offer a few tips for teaching children how to throw.

Here are just a few of the advantages that children obtain by playing throwing games regularly.

Fine motor skills is the coordination of small muscles, like those in the fingers and hands, with the eyes.  Developing fine motor skills gives children the dexterity necessary to perform complex tasks like picking up and arranging small objects.

Gross motor skills involve whole body movement and the engagement of larger muscles like those in the core.  Developing gross motor skills is essential for performing every day tasks like standing, walking, running, and jumping.

The development of both fine motor skills and gross motor skills in children is improved by playing throwing games regularly.

Throwing games introduce children to sports and PE activities
Throwing games are organized physical training sessions where children have to follow certain rules to play.  This gives the children in the group an idea of what PE activities and organized sports are like.  They will learn to memorize rules and follow them as they play.  They will also learn about other aspects of sports like fair play and being a good sport.

Many children struggle with timing when they are learning to throw and catch balls.  Throwing games will help them quickly develop this skill.  They will also learn the physical characteristics of different types of balls, developing an understanding how how they bounce and roll.

How to Throw Overhand

Over hand throwing is a fundamental part of many activities and sports.  Children need to learn how to perform overhand throws before they can play fun sports like Baseball, Cricket, Dodgeball and even Soccer (for throw-ins and goalkeeping).

There are multiple way to throw overhand.  Technically, bowling a cricket ball and throwing a baseball at the batter are both overarm throws, but the technique used is very different.  However, when most people think of overarm  throwing, they tend to imagine a basic throw like one of the throwing styles in the video below.  Here are some tips for teaching a basic overhand throw to a child:

Here are a few popular overhand throwing games to help you get started:

This is an excellent game for children who are trying to learn the mechanical process of throwing overarm.  To play this game, you will need:

This is a useful game because it helps you teach children the mechanics of throwing overarm.  You will be able to show them how to place their feet, how to turn their torso and how to use their arms.  They will quickly see an increase in the distance of their cardboard javelin throws as their technique gets better — and they won’t have to worry about chasing after the ball they just threw.

This is a basic version of dodgeball that can be played by young children who are just learning to throw.  To play this game, you will need a fence or wall which is at least 3 or 4 meters wide, and a soft foam ball (large or small).

This is a fun game ideal for children who have mastered the fundamentals of overarm throwing and have a good level of accuracy.  The concept of Spot On is that two teams must compete to see who has the most accurate throwing skills.  To play it:

It’s possible to have more poly spots than players on the court.  Simply use a different color for each team.  Once a player catches the ball, they move onto another spot of the same color.  This will extend the time of each round and is a useful option if there aren’t many players.

This is a chaotic game that is a lot of fun and gives children plenty of opportunities to practice throwing.  It is generally played on a basketball or netball court.  The children are divided into two teams.  They are each given a basket of balls of different sizes and weights.

How to throw Underhand

Underhand throwing is usually easier for children to master.  Children will be more accurate when throwing underarm and will have more control the velocity of the ball when they throw.  Learning how to throw underarm will allow the children to begin playing games like bocce ball, lawn bowls, ten pin bowling and kid’s softball.  Performing an underarm throw is simple!

Here are a few popular underhand throwing games for kids:

If you are working with children in a classroom, you can create a circuit of increasingly difficult underarm throwing challenges that they can perform.  The children can gradually progress from station to station as they manage to land each throw on target.

This approach gives the kids a sense of accomplishment and they will notice their own throwing skills improving.   This circuit uses small beanbags because they are easier for the children to hit the target with and they won’t roll away after being thrown.  The circuit can include:

This game combines underarm throwing with the rules of golf.  To play, you will need:

Have the participants start at the first tee and attempt to throw their beanbag ball into the bucket with as few throws as possible.  The children should throw one at a time until everyone has completed the hole.  If it is a larger class, they can start at separate holes and rotate around.

You can keep track of the scores on a piece of paper.  The child to complete the course in the least number of  throws is the winner.  You can also vary the length of the holes to make the course more challenging if the children are accurate throwers.

Once the children have learned to throw smaller balls, they can move onto move challenging games involving oddly shaped footballs.  Playing with footballs is more exciting because it’s handling characteristics are much more varied and you never really know which way it will bounce when it lands on the ground.

#8 — Catching relay
This is a great exercise that teachers participants how to throw and catch footballs.  It is often played on a basketball court, but marked court will be fine.  To play Catching Relay:

If you are working with children who are more accomplished at throwing and catching, you can use a baseball and baseball gloves.  The children can be split into pairs and simply throw baseball to one another.  You can also create a circle or square with 5-10 participants and have them throw the ball in a clockwise direction to one another.  Baseballs should only be used with children who already have good throwing and catching skills.

This traditional Chinese game is fun and fast moving game ideal for children aged 6 and over.  To begin, participants stand in a circle and one of the players is given a basketball or netball.  The players must then throw the ball across the circle in the hope of surprising someone and making them miss a catch.

If a player makes a catch, the two players next to them must raise the arm that is nearest to that player.  They have to hold it in the air until the player with the ball has thrown it to someone else.  If a player fails to catch the ball or a neighboring player fails to raise their arm, they drop out.  When the group only has 5 players left, they are declared the winners.

This is the simplest throwing and catching exercise you can perform with a child.  It is ideal for children who are 3 years and older.  To play this game, you will require a soft foam ball, sock ball, or small beanbag.

Playing is simple.  Start by teaching the child the catch stance.  This is hands together with palms up at waist height.  Stand a meter or two from the child and gently lob the ball so it lands in their hands.  Tell them to concentrate on watching the ball as it sails through the air.  If they are struggling, move a little closer so the ball easily lands in their hands.

Once they have caught the ball, have them throw it back to you, using an underhand throw.  You will be surprised by how quickly they catch on.

This easy-to-learn game is ideal for children in grades 3 to 8.  It is usually played on a basketball or netball court.  To play Catch 5:

This is a fun variant of dodgeball that many children enjoy more than standard dodgeball.  It is suitable for children in grades 1 to 8.  To play Detective Dodgeball:

The thing that makes Detective Dodgeball more fun is the fact that players have to memorize who has gotten other people out.  So, if a player has managed to get three people out, they will become a highly valuable target.  Hitting them will let your  three players come back onto the court.  It adds a little bit of strategy to dodgeball.

Thanks for reading 13 Throwing Games for Kids (Great for PE Class).  Do you have any throwing games for kids that you love?  Share them in the comments below. Make sure you check out our kicking games for kids as well.