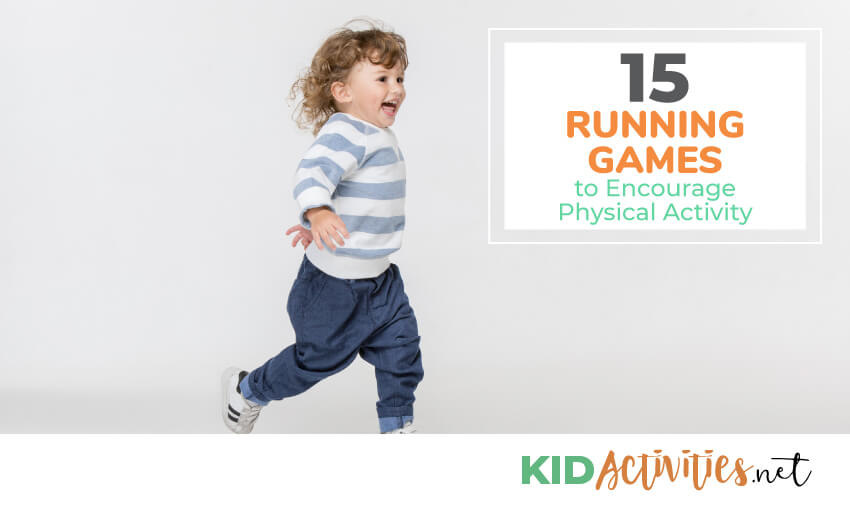 Running is one of the best forms of physical activity for kids. It improves their cardiovascular fitness, strengthens muscles, builds strong bones, reduces feelings of stress, and provides many other health benefits.

But even the enthusiastic and energetic child will eventually become bored with running laps around a track or in the gym. The best solution is to teach your children a variety of fun running games. These types of games can keep children entertained for hours and make it much easier for them to obtain the exercise they need to stay healthy.

In this guide, I’m going to share my top 15 fun running games to encourage physical activity. These games are easy-to-learn, highly addictive, and guaranteed to make your children more physically active. 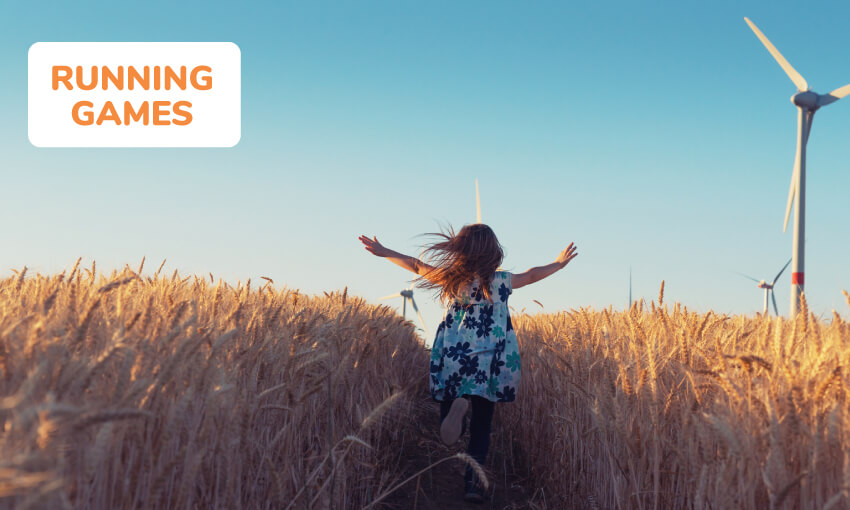 Know the kid’s limits. Make sure it’s not too hot out and make sure kids get enough water while playing these running games.

This classic game is incredibly exciting and very popular amongst young children. The objective of Scavenger Hunt is to solve a series of clues to find the ‘treasure’.

To play Scavenger Hunt, you will need:

How to play Scavenger Hunt:

Because there is a prize at the end, the children will be running as fast as they can — using up a lot of energy and improving their fitness. To make the game more interesting, make some clues that have multiple potential answers. This will split the group up, giving some of the slower runners a chance to find the clue first and take the lead. Check out our nature scavenger hunt riddles.

The game has all of the fun of football without the collisions! It is played in a similar way to American football, except there is no tackling. Instead, people will pull a flag off of a player’s belt to signify that they have been tackled.

There are also several other differences, like no kicking and the fact that you can’t run the ball when you are within five yards of a touchdown. The rules are designed to be simple, which makes it a great game for children to play.

To play Flag Football, you will need:

How to play Flag Football:

There are several variations of flag football, but the most common way to play it is:

You can read the official rules here or simplified rules for kids here.

If you want flag football sounds like something you want to try, you will need a flag football kit. It consists of field markers and belts with detachable flags. This kit from Stumptown Sportz is a great choice because it includes belts for 14 players with 3 flags per belt.

This kid’s running game is similar to capture the flag but much easier to learn. This makes it ideal for younger children who may struggle to learn the complex rules of CTF.

To play Sharks and Minnows, you will need:

How to play Sharks and Minnows:

This is a challenging game that combines puzzle-solving with competitive running. The rules are extremely easy to learn, so kids of all ages can give it a go.

To play Sharks and Minnows, you will need:

How to play Solve The Puzzle:

This fun running game is a fantastic way to introduce young children to competitive running. The concept is simple, so they will pick it up in minutes and will have the time of their lives as they try to outrun or catch their opponent.

To play Pony Express, you will need:

How to play Solve The Puzzle:

Capture the flag is one of the most exhilarating kids running games. It is very strategic, competitive, and encourages teamwork. Capture the Flag “Redux” is an even more exciting version of the game which is designed to be played in the dark.

The goal of the game is to capture the other team’s flag from their base and bring it back to your own base. If you are tagged in enemy territory while trying to obtain the flag, you will be placed in jail. Fortunately, you can be freed if another teammate manages to tag you.

In Capture The Flag Redux, all players are wearing glow in the dark wrist bands, so it is easy to identify allies and enemies in the dark. The “flag” is actually a glowing orb and the jail is marked out with glowing beacons. It is a lot more strategic than normal to capture the flag because stealth is more of a factor when playing in the dark.

To play, you will need:

How to play Capture The Flag Redux:

Various strategies can be used when playing. Some teams will designate players to be seekers (looking for the enemy orb) and guards (guarding the team’s orb). You can also have some players working as guards for the jail, who will attempt to stop jailbreaks.

If you are looking for a more competitive running game, try Last Runner Out. It was developed by Jim Stintzi as a training tool for cross-country runners. Last Runner Out is great for teaching kids how much fun competitive events can be.

How to play Last Runner Out:

This is a simplified version of Scavenger Hunt, which works well for groups of young children. It’s a great game for encouraging kids to run around like a pack and work as a team.

How to play Where To Run Next:

This is one of the more unusual kid’s running games I’ve ever come across, but it is actually a TON of fun. In addition to testing a child’s running ability, it tests how quickly they can get dressed!

To play Suitcase Relay, you will need:

How to play Suitcase Relay:

This game requires clever thinking and great fitness levels. It is a useful running game because it can easily be customized to match the age and fitness levels of the children who are playing.

How to play Multiple Choice:

You can also play this game with several smaller teams, awarding a prize to the team that answers the most questions correctly. Check out our article on fun paper games as well.

Laser tag is a fun running game that most kids will happily play for many hours. The objective of the game is to shoot opposition players with a toy gun that shoots infrared beams. All players wear infrared-sensitive targets which track if they have been shot or not.

There are many ways to play laser tag, including team vs team, capture the flag, domination matches, and Battle Royale. You can choose the mode based on how many players are available and their ages.

To play Laser Tag, you will need:

How to play Laser Tag:

This classic kids running game is action-packed, hilarious, and a lot of fun. While this game is usually played with real eggs, you can also use an egg and spoon race kit, which makes the game much less messy as you won’t be dealing with broken eggs. The rules for this game are extremely simple, which means children of all ages can play it.

To play, you will need:

How to play The Egg and Spoon Race:

Every list of fun running games has to include Tag! It is the world’s most popular running game amongst children and played by millions of children each day. There are also some fantastic variations of Tag which make the game even more fun.

To play Tag, you will need:

How to play Tag:

There is usually a rule of “no tag backs” which means the new “It” can’t tag the person who just tagged him or her. The game ends when all players are exhausted or when a truce has been called. A truce is usually something like “No more tags until tomorrow at lunchtime”. The game will continue the next day, with the last person who was “It” retaining the title the next day. It’s also common to have safe zones where tags cannot occur, like the classroom or lunch area.

There are many variations of tag, including:

Another fun running game that is ideal for warm and sunny days. Young children find this game particularly fun and laugh their heads off when splashed with water.

To play Water Balloon Relay, you will need:

How to play Water Balloon Relay:

This simple game will test the children’s athleticism and ability to balance. It’s very easy to set up and a lot of fun. This game is very similar to the water balloon relay, but with the objective of filling a bucket with water.

To play Fill The Bucket, you will need:

How to play Fill the Bucket:

Make sure you check out our tag games and our how to play ghost in the graveyard instructional post. 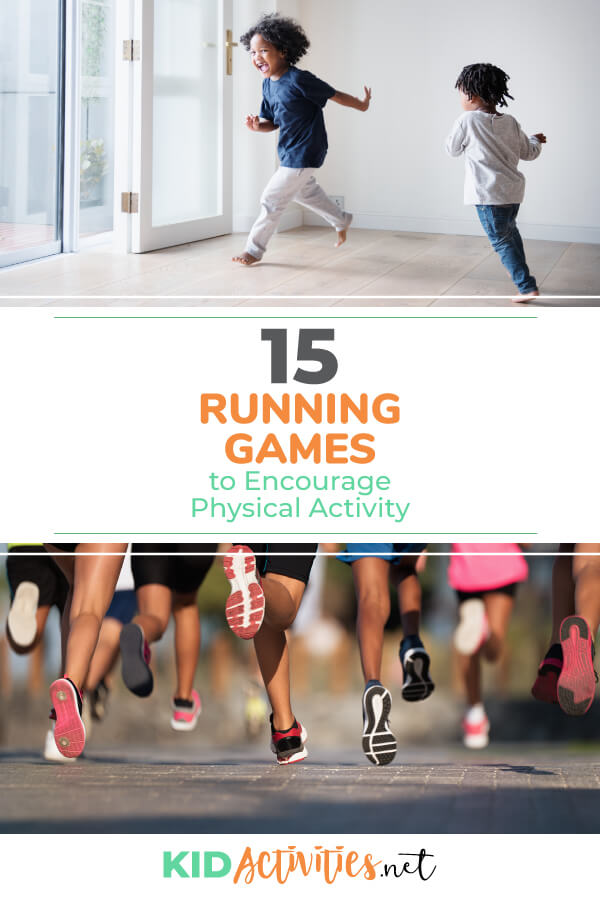