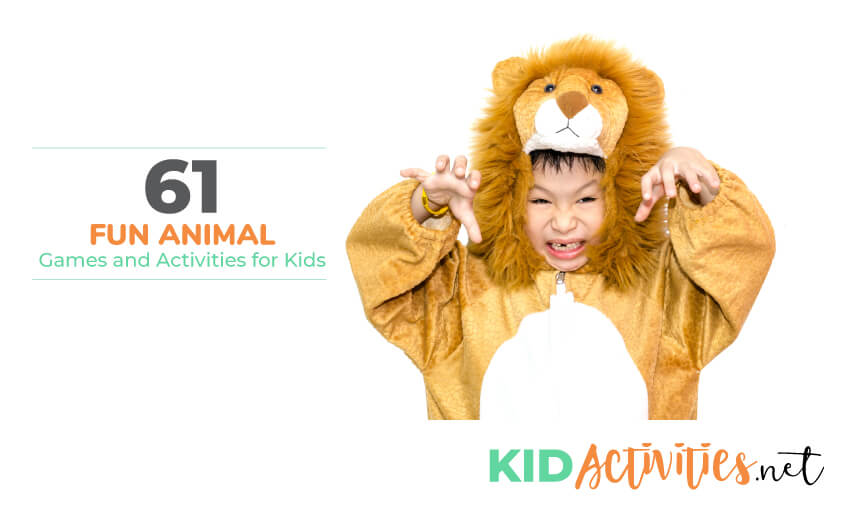 This extensive list of fun animal games and activities for kids is sure to lead to hours of fun and laughter. There is just something in kids that makes them naturally want to mimic or play with animals. What Child Doesn’t Love Animals? This category is great fun!!! It contains wonderful ideas for an ‘Animal  Theme’  Week, Month, Party or CLUB!

When thinking ‘Animal Themed Activities‘ …you can be specific to one category of animal— such as Farm Animal Games, Cats, Dogs, Endangered Species, etc.– this thread, however, is for the “I Really Like Animals” Theme! It includes a variety….

1. CHARADES based on animals or animal movies and books.

4.  RUN RABBIT RUN
Half of the group are called foxes and the other half are named rabbits. Rabbits are standing behind a line at one end of the play area. (home) Foxes are scattered all over the gym.
Captain Rabbit leads his/her brood for a walk.
The leader of the foxes says: “Run Rabbit Run!”
All rabbits run trying to return to their home.
All TAGGED rabbits become foxes. Continue until there are no “rabbits” left.

5. A WHAT? (Only using things to do with animals)

6. WHO AM I?
…..Version#1: When the children come through the door, tape an animal or animal item/object to their backs. They may ask each other “yes and no questions” about what they are. Explain that the first question they may want to ask is “Am I an animal or an object?” At the end, each child takes a turn saying what they think they are. Suggestions: cow, pig, sheep, dog, horseshoe, hay, dog bone, etc…

…..WHO AM I? Version #2:
Before the game, cut pictures of animals out of old nature magazines. Try to use the pictures on the covers, because they are sturdier. Then pin a picture with a safety pin to the back of each child’s T-shirt. They all  ask each other “yes or no questions”, such as “Do I swim in the ocean?” “Do I have feathers?” or “Do I live in the jungle?” It’s also a good ice-breaker activity – if some of the kids don’t know each other very well.

7. ANIMAL BUDDIES
Is similar to Who Am I? This time, whisper in each child’s ear a name of an animal. Tell them that other person that is the same animal there is at least one l as they are. Throughout the event they may ask each other yes and no questions to try to figure out who their “Animal Buddy” is. At the end of the time tell everyone to go sit by who they think their partner is. Go over the clues with the kids until they figure it out and everyone is sitting next to the correct buddy.

9. Play the “FARMER, ZOO KEEPER, or VETENARIAN SAYS”… Instead of “Simon Says”

12. ANIMAL SOUNDS
Randomly assign animal types to children (They pick them out of a container)
As youth walk about the room, they make their assigned animal sound; they have to find others that are making the same sound. Two of each animal works well because the process of elimination will help those with an unusual interpretation of the animal noise.

16. If you’re having a party, this is a fun way to distribute goody bags!

19. FRISBEE OR BEAN BAG THROW
Throw a small Frisbee or bean bag at a large picture of a Dog (or other animal) on the ground, the closest is the winner.

21. CHARADES USING ANIMAL CRACKERS
Child takes an animal cracker out of a bag/container and  doesn’t show it to the rest of the group. They then act out the animal while the other children try to guess what it is. When the group comes up with the correct answer, the child acting out the charade can eat the animal cracker! the game continues. 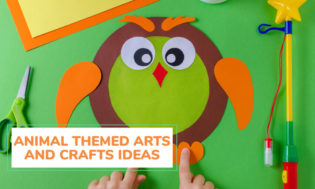 1. Make a mural, poster, or bumper stickers–decorate a wall…
Ideas:

2. HELP THE BIRDS–BUILD THEIR NESTS
#1 VERSION: Lend a helping hand to the birds in your area by supplying them with simple nesting materials. All you need to do– is fill a MESH BAG bag ( like the kind onions are packaged in ) OR A BERRY BASKET.

5. Animal MASKS made from card stock or paper plates.

6. Animal NOTE CARDS:
Use card stock folded in half and decorate it with stickers, stencils, or stamp pads with animal designs.
_______________
7. SEW animal-shaped toys for yourself or a pet.

8. Mix up a batch of baker’s clay and make animal shapes with cookie cutters. The children can form the animals–and paint and decorate them once they’ve baked and cooled.

Also…Make a batch of play dough–and have the children see how many animals they can make with the dough. Many recipes in this site’s Play Dough”category…

9. ANIMAL CRACKER MAGNETS
Use plain regular animal crackers. Have children color them with regular markers or paint. You can use clear nail polish and paint over what they have colored after it is dry. Then use a magnet small enough and glue it on the back with a hot gun or other strong glue.… instant magnets you can put on your fridge.

Draw, color, or paint a farm yard, a landscape or ______ scene on paper using crayons (Or other materials). Glue on the animal crackers to complete your  scene

12.  T-SHIRT PAINTING
Deliver a message about animals; design a plain, light-colored t-shirt with messages themed to: Keeping wild animals wild; caring for animals; any issue about which you feel strongly.  Tips:

• Assign different animals to small groups or individuals to research. Present information to the group.
You can also compile the above information into a booklet.

• Have groups PERFORM A SKIT of a favorite animal story for each other, families, or the program.

• WRITE TO LOCAL NEWSPAPER. Choose an animal protection issue that you are concerned about or which has recently appeared in the news. You may send the letter to the editor from your Animal Club as a group or ask all the club members to write something individually. Watch and see if it gets published. Newspapers are a great way to raise awareness of issues in your local community.

A GOOD VARIETY of JOKES ABOUT ANIMALS in the “Jokes thread”… 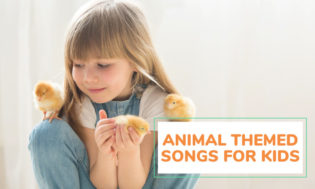 1. Sing ‘OLD MCDONALD HAD A FARM, complete with very loud sound effects. Each child or section can be given a different animal to act out.
2. Play and sing…

• A CD of animal sounds and…
• The Lion Sleeps Tonight / The Tokens
•How Much is that Doggie in the Window?
• B-i-n-g-o (I had a dog and Bingo was his Name-o)

To the beat of the music:
Hold up your hands and make them do a TAKING MOTION-four times…
Flap arms like WINGS four times
WIGGLE BOTTOMS four times
CLAP four times
_____________________
4. DO THE CHICKEN POKEY DANCE!
Sung to: “Hokey Pokey”
This idea can be adapted to any animal, Dogs, Cats, etc. Be creative 🙂

1. Check with your local veterinarians, animal shelter, Leader Dogs for the Blind, wild life rescue group or animal welfare organization about inviting a guest speaker to talk to your school club or program about an animal issue in which you are interested. Some topics could be:

• What is the work they do and how can people help?

• How to interpret animal communication.

• How to be safe around cats and dogs.

• How to care for and protect cats and dogs.

• What happens to lost and abandoned animals?

• How can we make life better for animals?

2. Ask parents to bring their pets at an appointed time. Have a pet show day. Give ribbons for the prettiest, smallest, biggest, oldest, most unique, loudest, most quiet, and so on. It should be organized so every child’s pet receives a ribbon.

3. Plan a trip to a zoo, aquarium, Animal or Horse Farm, or Veterinarian clinic.

4. Ask someone with unusual pets to visit. 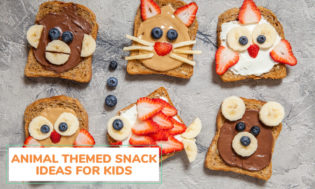 (I’ve made it with kids; they love it!)
Need:
Bunt Pan
4 cans of 10 each refrigerated buttermilk biscuits
Small bowls
1 and 1/2 sticks butter or margarine
Small pan
3 cups brown sugar
4 T brown sugar
Directions:
•  Combine sugar and cinnamon. Divide mixture in half and put into 2 separate bowls.
•  Adult melts 1 stick of butter in a small pan over low heat – or melt in microwave.
•  Tear each biscuit into 3 pieces and roll into balls. Dip the balls in the melted butter and then into one bowl of the brown sugar and cinnamon mixture. Roll then to coat evenly.
•  Put into the un-greased bunt pan.
•  Adult melt over low heat the second ½ stick of butter with the brown sugar-cinnamon mixture. Pour evenly over the coated balls in the pan.
• Bake for 30 minutes in 350 degree oven.
• Turn oven off. Let pan sit for 5 minutes and then remove from the oven and turn the pan over onto a serving platter.
• Let it sit a few minutes inverted on the plate, before removing it from the pan.
Cool before serving.
___________
3. FROZEN MONKEY TREATS
A healthy snack that kids will like!
Peel a banana and cut it in half. Insert Popsicle sticks into the cut ends. Dip the bananas into yogurt or melted chocolate, and then roll the bananas in chopped nuts, crushed cereal, or coconut shavings. Place the bananas on a small waxed paper-lined baking sheet and set the sheet into the freezer for an hour or so. Fun to make and even more fun to eat!
____________
4. PURPLE COW
Need:
¼ cup unsweetened grape juice
1 cup milk
1 sliced banana
Mix all ingredients together in a blender.
Makes 4-6 small servings
________________
5. BLACK COW (recipe makes 1)
Ingredients:
Root Beer, vanilla ice-cream, chocolate syrup
Directions:
•  Place 2 tablespoons of syrup in bottom of large glass. Add root beer, stirring until liquid is within 2 inches of top of glass. Add a huge scoop of ice cream.

10. DOGS OR PIGS IN A BLANKET
Igredients:
Package of hot dogs or little smokies cut in pieces; 1 can refrigerated biscuits (not the flaky type)
Directions:
• Flatten the biscuit, cut in half. Place half the hot dog on the biscuit and bring the two sides of the biscuit together. Place on a cookie sheet and bake them the same temperature as it indicated for the biscuits. They are done when the biscuit is done. Dip in ketchup or mustard.

VERSION #2: PIG IN BLANKET
Ingredients:
8 hot dogs
4 slices American cheese, each cut into 6 strips
1 can 8 0z.) Refrigerated crescent dinner rolls
Directions:
• Heat over to 375. Slit hot dogs to within ½ inch of ends; insert strips of cheese into each slit.
Separate dough into triangles. Wrap dough triangle around each hot dog and place on
Ungreased cookie sheet, cheese side up. Bake 15-20 minutes or until golden brown.

1.  Prepare cake mixes and bake according to directions (any size pans).

2.  Prepare pudding mix and chill until ready to assemble. Crumble white sandwich cookies in small batches in food processor, scraping often. Set aside all but about 1/4 cup.

3.  To the 1/4 cup cookie crumbs, add a few drops green food coloring and mix. When cakes are cooled to room temperature, crumble into a large bowl. Toss with half the remaining white cookie crumbs and the chilled pudding. (Mix in just enough of the pudding to moisten it. You don’t want it soggy. Combine gently).

4.  Line new, clean kitty litter box. Put mixture into litter box. Put three unwrapped Tootsie rolls in a microwave safe dish and heat until soft and pliable. Shape ends so they are no longer blunt, curving slightly. Repeat with 3 more Tootsie rolls and bury in mixture. Sprinkle the other half of cookie crumbs over top.

5.  Scatter the green cookie crumbs lightly over the top. (This is supposed to look like the chlorophyll in kitty litter.) Heat 3 Tootsie Rolls in the microwave until almost melted. Scrape them on top of the cake; sprinkle with cookie crumbs.

6.  Spread remaining Tootsie Rolls over the top; take one and heat until pliable, hang it over the side of the kitty litter box, sprinkling it lightly with cookie crumbs. Place the box on a newspaper and sprinkle a few of the cookie crumbs around.
Source: Familycorner.com