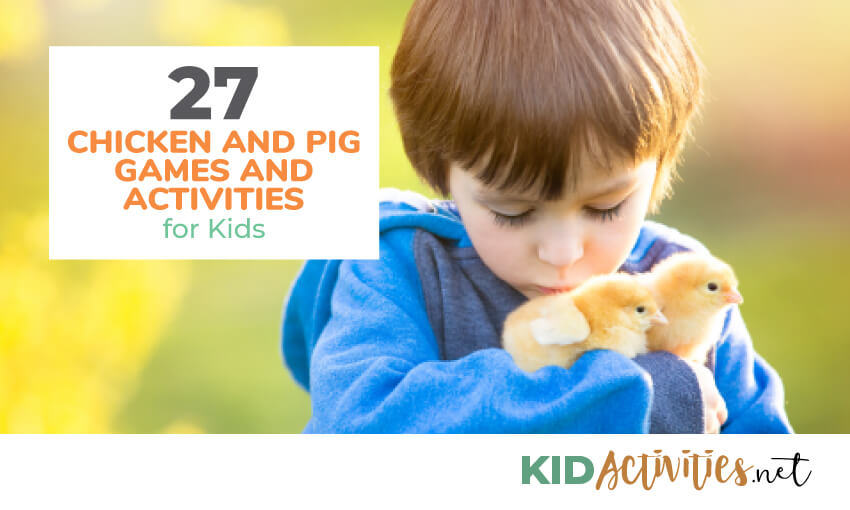 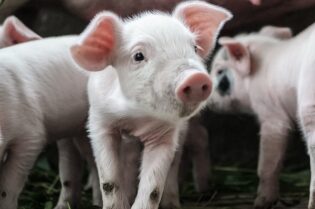 Find pig activities for your next farm extravaganza, and also enjoy some from our fine feathered friends!  Ask your children which farm animal is their favorite when they enjoy these chicken activities!  Have fun with pig games, chicken games, and more!

Read the book, do some art and act it out!

Children can make the three little pigs houses by using red paper for bricks, spaghetti for the straw, and small twigs for the house made of sticks. Afterwards, have children act out the story!

Need:
Paint
Paper
Crayons or Markers
Paint children’s toes with pink paint. Press them on paper. Have children decorate toe prints as pigs and make a farm or country side on the rest of the paper–around the pig’s prints.

1. Paint a large paper plate and a small paper plate pink.
2. Glue the small plate on top of the big plate to make the face. Cut out ears, nose, feet. Glue them on to pig.
3. Draw eyes and a mouth with a black marker.
4. Create a tail by twisting a pipe cleaner around a pencil and then taping it to the back of the pig. Provided by the class of lessonsfromateacher.com

#1
Egg Carton, paint, marker, yard or string
Cut the egg carton bottoms (the part the eggs sit in) into its twelve sections. Have the kids paint it and put the nostrils on.

#2
Materials:: Toilet paper roll. pink paint, pink paper, yarn or elastic, and glue
Directions: Make pig snouts from toilet paper rolls cut in half and stapled, glued or taped together. Paint them pink or glue pink construction paper around it. Punch holes in sides and tie on yarn or elastic.

6. Pigs in a Blanket

Ingredients:
Package of hot dogs or little smokies cut in pieces
1 can refrigerated biscuits (not the flaky type)

Directions:
Heat over to 375 degrees. Slit hot dogs to within ½ inch of ends; insert strips of cheese into each slit. Separate dough into triangles. Wrap dough triangle around each hot dog and place on ungreased cookie sheet, cheese side up. Bake 15-20 minutes or until golden brown.

Directions:
Place cheese and hot dog on bread slice. Roll the two ends of bread up around the hot dog and secure with toothpick. Bake in pre-heated 350 degree oven until hot.(About 20 minutes)

This is a great activity for kids of all ages! Purchase or make bean bags suitable for tossing and draw a large picture of a pig on a piece of cardboard with its mouth wide open. Draw and cut out the mouth so you have a hole large enough to toss the bean bags through. Place the box about ten feet away (adjust distance for the age of your guests) and give each child a chance to toss the bean bags into the pig’s mouth!

Preparation for this game is dependent on the age of the children playing. Younger children may need to be taught how to make complete flying movements. You may also need to discuss which animals can and cannot fly. As the adult, it is best for you to be the first leader of the game. Afterward, let the children have turns being the leader.

Have children stand in a group facing the leader. Make sure each child has enough room to flap their arms in a flying motion.

“It’s time for my piggies to go to bed,”
The nice big mother piggie said.

“Now I must count them up to see
If all my piggies came back to me.

I had a little pig,
And I fed it in a trough,
He got so big and fat,
That his tail popped off.
So, I got me a hammer,
And I got me a nail,
And I made that pig,
A wooden tail.

To all words beginning a vowel (a-e-i-o-u, add the syllable ‘way’ to the end of the word. ‘Eat’ becomes eatway and ‘over’ becomes ‘overway’.

For words that begin with a consonant, move the first letter of the word and add it to the end–add ‘ay’ after the consonant.
Example:
Man = Anmay
Cat = Atcay
Ice Cream= Iceway reamcay

Do your kids know that pigs are intelligent? They wallow in mud to keep cool because they don’t have sweat glands. Having a piglet for a pet, is like having a puppy.

Make a bowl of Chicken Feed by tossing together crisp, crunchy shoestring potatoes, salted corn nuts, shelled sunflower seeds and pistachios, dried blueberries and unsweetened coconut flakes for a crunchy, nutty treat. (Leave out whatever you don’t like)

Make pancakes.In the center of each pancake make a nest shape with whipped cream.
Place a marshmallow chicken peep, jelly bean eggs or melon balls in the middle of the nest.

When these were served, KidActivities poured a little warm syrup on the pancake before putting on the nest of whipped cream. Optional ‘sprinkles’ were also added. All thought they were not only fun but tasted great!

17. Raw Egg (or Sunny Side up) On Toast (Eggs and Chickens go together!)

This ‘egg’ is a peach half!

Directions:
Put slice of pound cake on plate.
Place peach half on top– round side up.
Add whip cream around peach and serve.
It looks like a raw egg on toast! 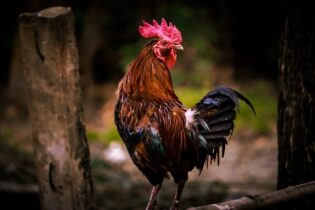 19. Do the Chicken Pokey

–to the chicken dance music!
To the beat of the music:
1. Hold up your hands and make them do a TAKING MOTION-four times…
2. Flap arms like WINGS four times
3. WIGGLE BOTTOMS four times
4. CLAP four times

GAME
The children (chickens)) roll their eggs (PLASTIC OR REAL) using only their noses. (beaks) The first one over the finish line wins…

Eggs (real hard-boiled or plastic), spoons, and an area to run are all you need for this game. Variations could include relays and obstacle courses. To make it easy for younger kids, place something on the spoon to make the egg stick.

Be sure to see all the EGG RACE GAMES! They start just below mid-page of Races, Relays, Beanbags, Balloons and Eggs!

The children run from one safe zone to the next—in the middle is the CATCHER, who calls, “Run run chicken — go home” to signal the others to run across the mid space. Anyone tagged becomes part of the catchers for the next run, proceeding until all are caught and the game begins again…

25. Painting with Peeps (The marshmallow chickens from Easter)

Cut out large “chick shapes” from white paper. Put tempera paint (white, yellow, orange, black) in containers and then use REAL candy “Peeps” to apply the paint in a sponge like effect.
The head makes a good grip for the bottom when the chick’s bottom is dipped in paint.
Extra fun! Have “Peeps” for a treat. If you’re concerned about younger children taking a bite during the painting, you can use vanilla pudding with food coloring to paint!

Cut the separate little egg cups from a white Styrofoam egg carton. Make jagged (SAW TOOTH) edges around the top to resemble a cracked egg. Glue this to a small square of poster board.

Glue dried grass, hay, or excelsior around the bottom of the egg to form a nest. Use either two yellow cotton balls or two yellow pom-poms to form a chick. Glue one of top of the other inside the egg to form the chick’s body and head. Cut a tiny diamond from orange felt and fold in half. Put a string of hot glue on the fold and stick on the chicks face. Glue on wiggly eyes.

Interesting Observations from our Fine Feathered Friends (THE CHICKEN…)

Be sure to check out the entire FARM & HARVEST THEME  and also the EGG THEME. You can’t have chickens without eggs!

For CROSSING THE ROAD JOKES – Click Here!  Many are about Chickens! 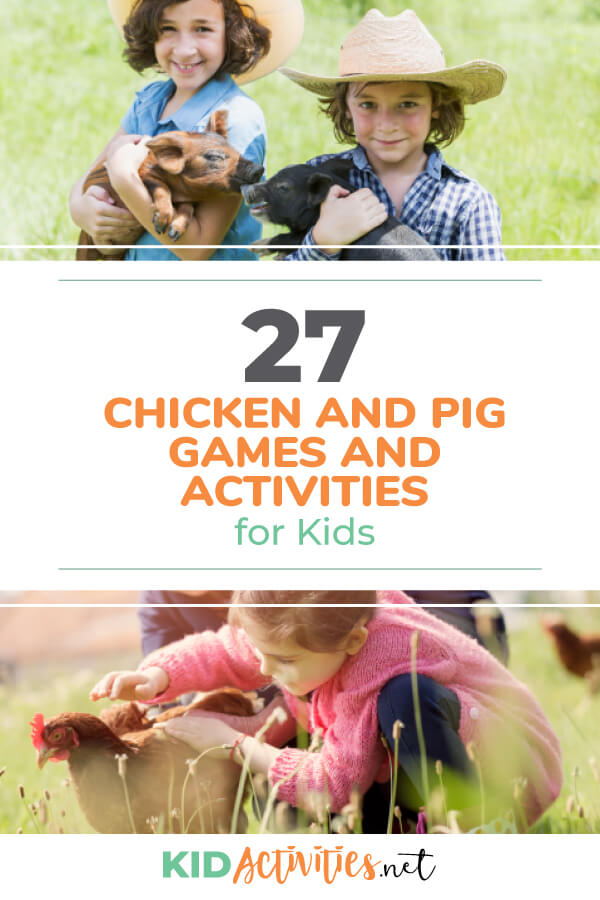