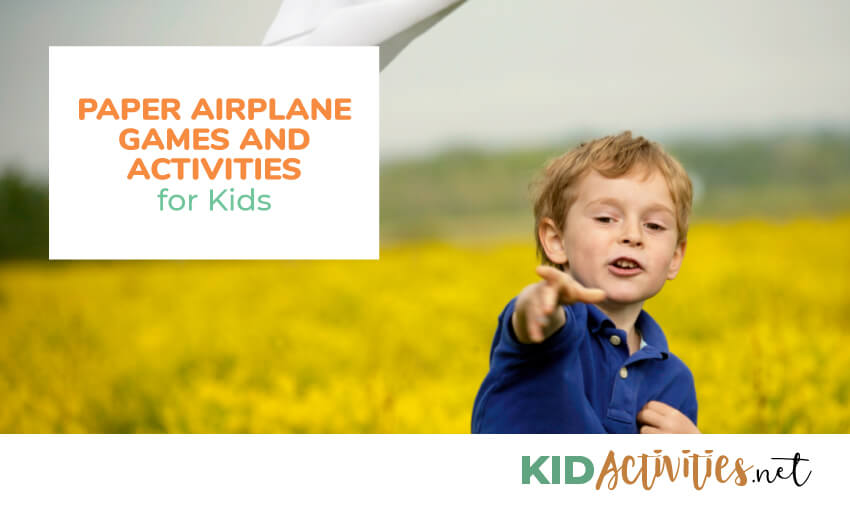 Making paper airplanes is an exciting activity that most kids will enjoy. Not only do children love throwing paper airplanes, they enjoy the entire process of turning a piece of paper into a cool toy. It really sparks their curiosity and helps them realize the potential uses of the objects around them.

Once you have a paper airplane in hand, the most obvious use is to throw it off a tall structure. However, there are plenty of other paper airplane games and activities for kids, including races and paper airplane target games. This post will share some of the best. 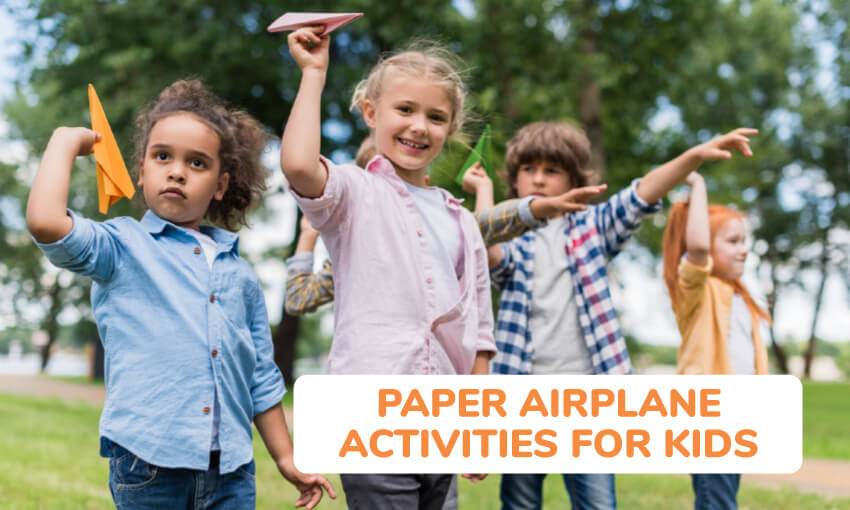 Making paper planes isn’t just a fun activity for kids, it offers many benefits including:

Showing kids that they can make cool stuff

Once a child has discovered that they can make a cool toy from a piece of paper, they will immediately wonder what other objects can undergo a similar transformation. They will learn how enjoyable the process of creating can be. Instead of demanding a toy off the shelf, they will interested in discovering the other fun toys that can be created from objects around the home.

An outdoor or indoor activity

You can make and use paper planes in any environment. If it’s raining, you can navigate your home’s corridors with paper planes. If it’s sunny outside, you can go for a walk and throw your paper planes from steep hill.

The paper needed to make paper planes costs a few cents. Making airplanes can even be an opportunity to turn trash to treasure. You can use old cardboard, newspapers, or aluminum foil that you have laying around your home. It costs nothing to obtain the instructions needed to make a variety of plane designs and you can use your creations anywhere.

The Best Paper Airplane Games and Activities for Kids

This is a simple game which tests the speed of each child’s paper airplane. Start by having the kids create their ‘fastest’ paper airplane design. This should be a plane that is extremely long and narrow. They can decorate their planes with bright colors, racing stripes, and doodles of the adventurous pilot who is controlling their plane.

Once everyone is satisfied with their design, designate a starting point and finish line for the race. A piece of string tied between two objects is a great way to mark the finish line. The starting line should be about 20-30 feet from the finish line. When you say ‘go’, the kids will throw their planes. The winner is the first plane to cross the finish line.

You could also play this game with 1 vs 1 play-offs and a championship scoreboard. This can be more exciting as the children will get to compete in multiple races to see who has the fastest paper airplane. Visit this website for a high-speed paper airplane design.

The speed of a paper airplane isn’t always its most important attribute. Plenty of fast paper planes have no flight control and simply crash into the ground at high velocity! Challenge the children to create a paper airplane with a focus on maneuverability and accuracy with this game.

To play Hit Your Target, you will need:

Start by setting up the targets and assigning points to each target. The smaller targets should have higher points because they are more difficult to hit. Each child then stands at an assigned point and gets to throw 5 paper airplanes at the targets. They receive points for each target they knock over, with the child who has the highest points being declared the winner.

This paper airplane game challenges kids to design an airplane that is capable of flying long distances.  This game can be played indoors or outdoors. To play, you will need:

Going one-by-one, the children will stand on the throwing line and throw their paper airplane as far as possible. Measure the distance of each throw and place a marker on the ground to represent the longest throw. Each child can have several throws.

Paper planes that are fast or maneuverable may not necessarily have the longest traveling distance. Have the kids tweak their designs and offer some tips for creating a plane that achieves more distance.

Airborne is an exciting paper airplane activity that challenges players to invent paper plane designs with specific aerodynamic characteristics. The goal of this game is to keep a paper plane in the air for as long as possible. This will require a very different design to a long distance or super fast paper airplanes used in other games.

To play, you will need materials to make paper planes and a timer. Participants will spend some time thinking about the right design for a long-flying paper airplane. They will then make a couple of designs that they want to try out. Next, everyone will gather together outside to throw their experimental planes, one at a time. Time the flight of each plane. The person whose plane stays in the air the longest is the winner.

You can also venture to elevated locations to see how long the kid’s paper airplanes stay afloat when thrown from great height. For tips on creating a paper plane that stays in the air for a long time, watch this video.

This fun paper airplane game for kids requires the use of a plane that is accurate, has good flight time, and excellent speed. To play ring throw, you will need:

The goal of the game is to throw your paper plane through a series of hoops in as few throws as possible. It is played in a similar way to golf, with each player taking turns to throw their paper airplane at a target.

The first player will stand at the ‘tee spot’ of the course and attempt to throw their plane through the first target. If they miss, the next player gets a turn. When it is the first person’s turn again, they pick up their paper plane from where it hit the ground and have another throw.

This is a simple paper airplane activity that is a lot of fun to play. This game is best played outdoors. Start by having the children split into groups of two. Each group will spend some time crafting several paper airplanes. They partners will then go outside and stand about 5 meters from one another.

Play continues for a 5 minutes, with the winning team being the group that successfully catches the most throws in the allotted time. You can let teams design multiple planes, so if one of their designs fails, they can switch to better one.

It’s a good idea for the children to wear safety glasses during this game.

Perfect Landing is a challenging paper plane game that really tests the maneuverability and accuracy of a plane design. To play this game, you will need:

Have the players assemble about 20 feet away from the bottom landing strip. Going one at a time, each player will attempt to land their plane by throwing it towards the strip. If they manage to land the plane, they are awarded the point value of that segment. After everyone has had 5 turns, calculate who has the highest score and declare them the winner.

Now that they’ve learned these fun paper airplane games, you can teach them how to make a cootie catcher. 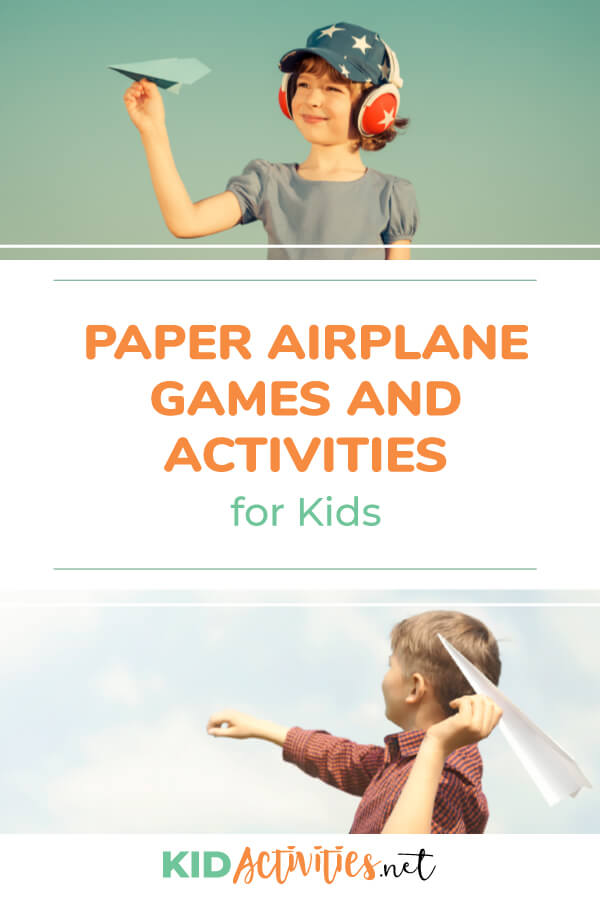 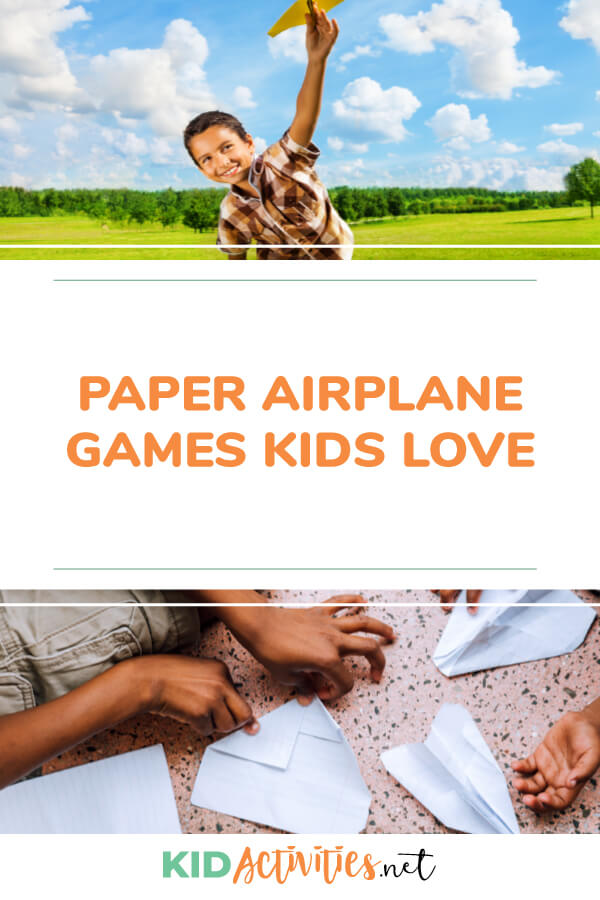