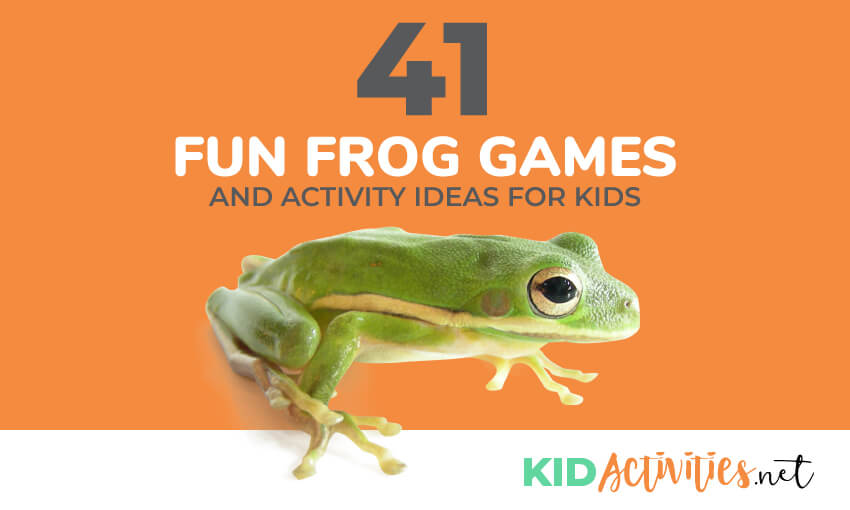 We have put together a collection of fun frog games and activities for kids. These ideas are great for doing a frog theme at school or just having fun on any given day. A frog theme is perfect for a “leap year.” If you are looking for Art, Games, Snacks, Jokes, Decorations, Trivia, Book List, or Party Activities with a Frog Theme? Have ‘Toad-ally Awesome’ fun with the following ideas!

1. PIN THE CROWN ON THE FROG

2. Play PIN THE TONGUE ON THE FROG

(A version of the ‘Crown’ idea up above)

This can be played in a circle, a line, or as a “Froggie Says____” game. Give children a variety of “hopping” commands such as:

Have children get into pairs with pairs trying to “catch flies” by tossing raisins into each other’s mouths.

This game is for 6 or more players and should be played in an open area.

1. Form two even teams.
2. The first players from each team get into a frog position, squatting with their hands on the ground.
3. While making frog sounds, they “frog hop” to the end of the playing field and back.
4. When they return, the next person on each team does the same.

Here is a different version of “Duck, Duck, Goose”…
The player is tapped on the head when the word “jump” is said.
They must hop and try to catch the other player who must also hop around and get back to the empty spot.

1. Paint the bottom of a large cardboard box (with low sides) blue. The blue is water.
2. Put some small green paper plates on the ‘water’. These are lily pads.
3. Purchase small toy frogs and have children toss the frogs onto the ‘lily-pads’.

Optional: Put numbers on the pads and add the points up as the frogs land on the pads.

Draw flies on small balloons or water balloons and toss them into a basket or bucket representing a Frog. (You could draw and attach a large frog on the container) Beanbags or black balloons could also be used as the ‘flies’.

This is a fun scavenger hunt idea.

Young kids would enjoy picking out a floating frog in a wading pool, sink, or tub. Have a prize correlated to the number placed on the bottom of the frog.

13. Buy stretchy frogs, and have a FROG FLINGING CONTEST

See who can fling their frogs the furthest. (Some can be purchased online at Oriental Trading) Write numbers on ‘sticky notes’  (5-10-15, etc.) and tape them Bulls-Eye style on a wall or door. Who can get the most points?

14. HAVE A CROAKING CONTEST!

Instead of chairs, you could use green card stock and cut out lily pads about 18″ wide.

It’s just like hot potato using a plastic, plush toy, or rubber frog; pass him quickly because frogs are squirmy!

Idea: CAN YOU MAKE OR PURCHASE A FROG PINATA?

If you are playing with 2 or three children to a line–introduce a MATH component to the ‘Leap Frog’ and MEASURE HOW FAR each child jumps!

Suggestion: Do this outside

Use FROG PRINTABLES for the kids to COLOR. 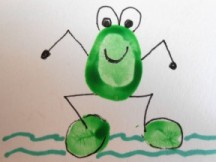 Have FROG BOOKS AND PUZZLES available for the kids to read and play during the theme.

IDEA: How about adding ‘Green’ food coloring or Kool-Aid to your favorite play dough-goop and slime recipes?! 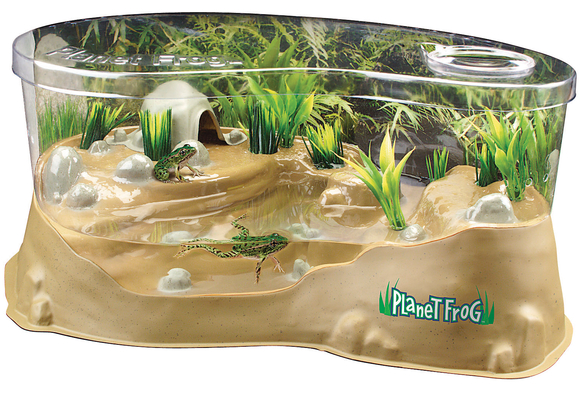 23. PLANET FROG® – LIVE FROG HABITAT
A place where you can watch live tadpoles magically transform into frogs. Watch as your frog swims in its own pond and explores the surrounding rain forest habitat. Learn why frogs play an important role in the environment and the world in which we live. Includes mail-in coupon for a live tadpole. Manufacturer requires a $5.99 P/H fee with coupon.
Item #: 8WWTAD Your Price: $28.95 (2013)

Click to the Frugal/Money Saving Category of this site to learn how to save 10% on all orders!

32. PRIZES (Purchase at such places as Oriental Trading)

We have many more fun bookmark ideas too!

*DON’T FORGET THE MUPPET MOVIES!
With all the frog activities, the most famous frog ever has to be included…Kermit!

*Disney Princess and the Frog Movie~Release 2009

JOKES ABOUT FROGS (Frog jokes near page bottom of category)

Songs and Poems About Frogs

Five little speckled frogs
Sitting on a hollow log
Eating some most delicious bugs
Yum Yum…
One jumped into the pool
Where it was nice and cool…
Now there are four speckled frogs
Glub, glub…
(…and so on in descending order )

A little green frog once lived in a pool
The sun was hot and the water cool,
He sat in the pool the whole day long,
And sung a dear little, queer little song,
“Juaggery do, Quaggery dee,
No one was ever so happy as me.”

41. CHILDREN’S FROG BOOK LIST (Most are for younger kids)

Frog vs Toad: What is the difference between a frog and a toad?

Many don’t know the difference between frogs and toads. They are quite different animals, although they belong to the same animal group.

AND…neither frogs nor toads will give you warts! That is just a myth.

FROG SOUNDS… Every different species of frog makes it’s own special sound — it’s only the male frog that can croak.  They have a small sac in their throats that vibrates the air as they slowly let it out.

The sounds that frogs make are not what you’d expect. Did you know that there are frogs that chirp? Others can whistle, croak, ribbit, peep, cluck, bark and grunt. (Remember this if you have the ‘Frog Croaking Contest mentioned in the above Frog Games!)

WHAT DO FROGS EAT?

EYESIGHT…Frogs have very good eyesight. They bulge out the sides of their heads in order for the frog to see in nearly all directions.

HEARING…Frogs also have an amazing sense of hearing. You can often tell the difference between a male and female frog by the size of their eardrum, which can be seen behind their eyes. If the eardrum is smaller than the eye, the frog is a female. On males, their eardrum is the same size as the eye.

LEGS…Frogs have very powerful back legs and webbed feet that help them jump great distances, as well as, swim. Frogs even use their legs to dig or burrow, underground for hibernating. Certain frogs can jump up to 20 times their own body length in a single leap.

APPEARANCE…Every different species of frog has his or her own look. They come in many colors, patterns, and sizes.

PREDATORS…Frogs have many predators. Animal predators include birds, fish, and reptiles.

RAINFOREST…Most rainforest frogs have pads of sticky hairs on their fingers and toes, as well as, loose sticky skin on their bellies, that make them great climbers to escape their predators. Many of these frogs live in high trees for safety.

CAMOUFLAGING…Other frogs are very good at camouflaging themselves so that they blend in with their environment, making it harder for their enemies to find them.  A frog can change the color of its skin depending on its surroundings.

MATING…When male frogs are ready to mate they will ‘call’ out to the female frogs. Each different species of frog has its own special sound and that is the sound that the same species of female frog will answer to. Some frogs are so loud they can be heard a mile away! After they meet, they find a suitable spot to mate and lay their eggs.

The male frog will hug the female from behind and as she lays eggs, usually in the water, the male will fertilize them. After that the eggs are on their own, to survive and become tadpoles. There are a few species of frogs that will look after their babies, but not many.

There you have it, 41 fun frog games and activities for kids. We hope you have enjoyed the read and have gotten some inspiration for your future frog endeavors. If you need some more theme ideas make sure you visit our themes page.