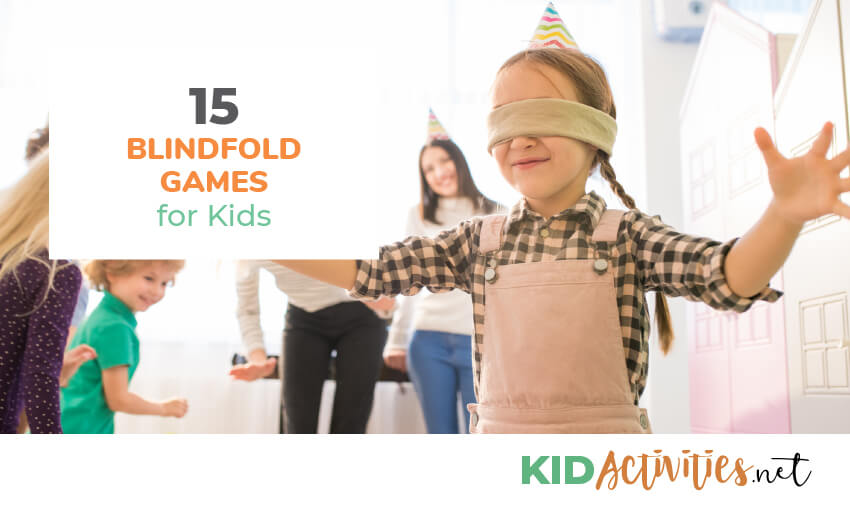 Blindfold games are the perfect activity for birthday parties, sleepovers, campouts or any occasion. Kids find blindfold games very fun, exciting and engaging. They love being challenged to use their other senses and find it hilarious when they fall over or bump into other players!

Why Are Kids Blindfold Games Perfect For Group Events?

Many of the games listed below require the use of teamwork between a blindfolded person and a partner. Teamwork is a valuable skill for children to learn and will help them in many aspects of their lives. Many games also require the blindfolded player to trust the other players, which can help them develop solid friendships.

When blindfolded, children have to use their other senses. This can be quite challenging as they may not be used to finding their way around the world solely using their hearing, sense of smell, and touch. This makes blindfolded games much more exciting compared to other types of games.

Kids love blindfold games because they are completely different from the other fun games they play. They often involve players bumping into objects and other funny moments, which will have your children laughing their heads off. 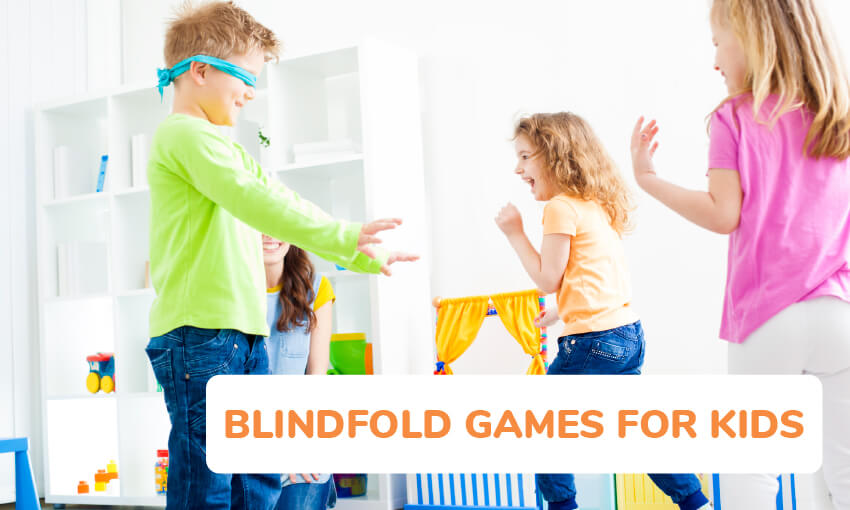 The Best Blindfold Games For Kids

1. Pin The Tail On The Donkey

I’m going to start the list with a classic blindfold game for kids that most people would already know — Pin The Tail On The Donkey. This is an American game that was played as far back as 1899. The rules are simple, so it can be enjoyed by children of all ages. There are several versions of Pin The Tail On The Donkey, which use other animals including monkeys, unicorns, and dinosaurs.

The goal of the game is simple: blindfolded players attempt to attach a donkey’s tail onto the rear end of a donkey illustration. The person who manages to get the tail closest to the correct location is declared the winner.

To play, all you need is:

Fortunately, you don’t have to collect these items yourself as there are several pre-made Pin The Tail On The Donkey Kits available. Some of the best include:

La La Unicorn Game (Pin The Horn On the Unicorn)
This unicorn-themed activity is actually two games in one — a “Pin the horn on the unicorn” game and “Pin the Tail on the unicorn”. It includes a large 31.5 x 20-inch gloss poster with a large picture of a unicorn, a purple blindfold, 12 x horn stickers, 12 x tail stickers, and 12 x “Thank You for Making My Party Magical” Unicorn stickers. The stickers are reusable, so the children at the party can play multiple games. Check out the La La Unicorn Game.

Hokie Pin The Tail On The Donkey Party Game

This is a more traditional version of the game that includes a 29 x 19-inch donkey poster, 1 blindfold, 30 tails, and double-sided tape for attaching the poster to a surface. The tails are stickers, so they cannot be re-used. Check out the Hokic Pin The Tail On The Donkey Party Game.

Happy Storm Pin the Tail on the Llama

How to play Pin The Tail On The Donkey

Blindfolded Twister is a variation of the popular 1960’s board game “Twister”. In the original, each player would spin a dial then place the specified body part on the specified color. The blind version is similar, but much more chaotic as people attempt to position themselves without being able to see what they are doing!

How to play Blindfolded Twister

Play continues until a player falls over or cannot find any spots available for their hand or foot. They will be declared out. The winner is the last player on the mat. This version of twister tests the memory more than the standard version because players need to remember where they felt a circle, snowflake, or another shape. This makes the game exciting and even more fun than standard Twister.

This outdoor game requires a lot of teamwork and coordination. It’s a particularly good game to play at school or a camp.

How to play Blindfolded Fetch:

This is a simple game that children of all ages can enjoy. Before playing, gather the following:

How to play Blindfold Taste Test:

Match the foods to the ages of the children. For example, young kids should have safe foods like jello, banana, chocolate, raisins, apple, ice cream, and milk. If the kids are slightly older, incorporate less palatable foods like olive oil, salt, garlic powder, instant coffee, and curry. These foods will give the players quite a shock and lead to some very funny moments!

Another slightly “nicer” version of this game involves multiple flavors of ice cream. Players have to sample each ice cream and guess the flavor.

Note: Before playing this game, make sure none of the children have food allergies.

This blindfold game is perfect for team building as it encourages participants to work together. To play, you will need:

How to play Key Keeper:

Initially, the facilitator should point to a single player.  As the game progresses, they should use multiple players to make it more challenging for the key-keeper.

This is a simple pen and paper game that creates some “interesting” artworks. To play this blindfold game, you will need:

How to play Blindfold Drawings:

The Piñata Game is a very popular party activity that young children are crazy about. They love swinging a bat at a piñata and enjoy eating the delicious treats that eventually come out of it. To play the Piñata Game, you will need:

How To Play The Piñata Game

The easiest way to set up the Piñata game is by buying a pre-made Piñata kit. Some of the best options are:

Fun fact: Although Piñatas are associated with Mexico, they may have originated in China!

This is a hilarious dueling game that can be played with two or more people. The goal of the game is to hit the other player with a rolled-up newspaper. However, it is made more challenging by the fact that both players are blindfolded and can only swing their newspaper after shouting “Is that you Moriarty?” To play, you will need:

How to play Is That You Moriarty:

Smart players will move stealthily around the playing area, trying to get behind their opponent before taking a swing. It is a lot of fun!

How To Play Mystery Object

Get creative with the kinds of objects that you use. Start with something simple like a spoon or rubber band. Then, move onto some weirder items like jello/custard, a piece of toast, a rubber spider, a snow globe, a pair of maracas and so on. Check out some of our other mystery game ideas.

This is another traditional game that has been played for hundreds of years. It is a variation of tag, with the player who is “It” being blindfolded. As they often say, the simplest games are the best. Blind Man’s Bluff proves that saying to be correct as children absolutely love this game! To play, you will need a blindfold, 3 or more players, and a large open space.

How to play Blind Man’s Bluff:

You can make the game more interesting by allowing the children to dress up between rounds, so they are constantly wearing different clothes. There are several variations of Blind Man’s Bluff which you may prefer. In another popular version:

Make this variation of Blind Man’s Bluff more interesting by allowing players to reposition after every “Blind Man’s…” call. You can find more fun tag games on the site.

One of the reasons why blindfold games for kids are a fantastic addition at parties is that many of them are team-building. Trust Me absolutely falls into that category. To play, you will need:

How to play Trust Me:

This is another simple game that is surprisingly fun. Players will need to be as quiet as possible to catch their shadow. To play, you will need:

How to play Catch My Shadow:

Hit The Target is another blindfold game for kids that really emphasizes teamwork. It is a fun icebreaker game that is fun for children of all ages. To play Hit The Target you will need:

How to play Hit The Target:

Minefield is an adrenaline-packed game where players need to cross an imaginary minefield while wearing a blindfold. Fortunately, they have the help of a teammate who will guide them across. To play Minefield, you will need:

How to play Minefield:

This game is absurdly simple but so much fun that the kids will want to play it again and again. To play, you will need a blindfold for all participants and a large open area.

How to play Farm Animals:

Need some animal ideas? Check out our list of animals that start with the letter N.

I hope you found 15 Blindfold Games for Kids useful. Give these games a try, you’ll find that kids love them! 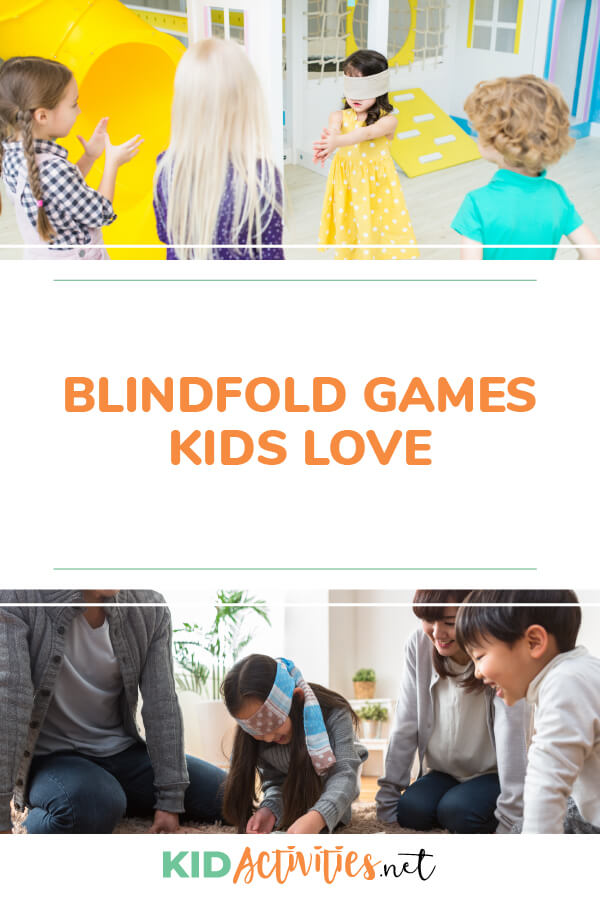 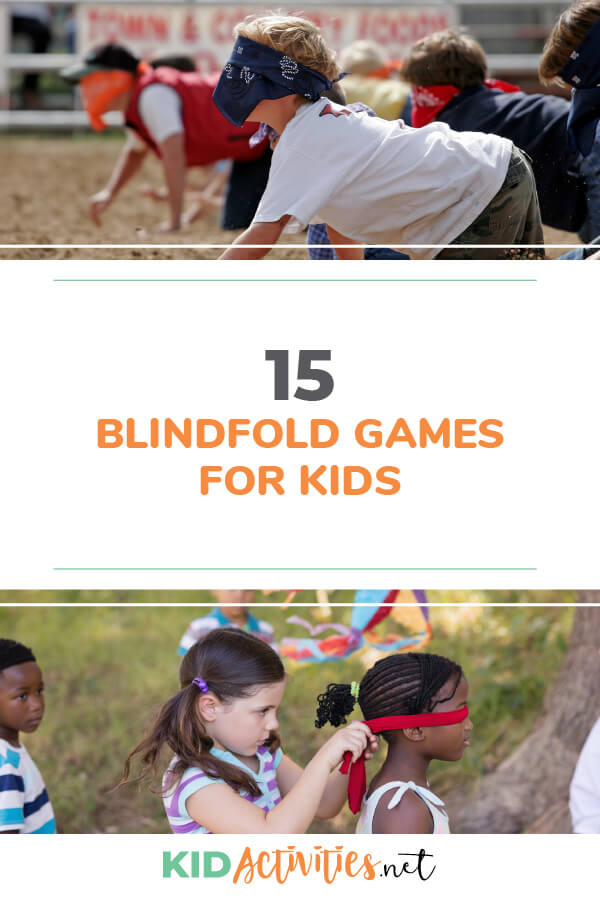