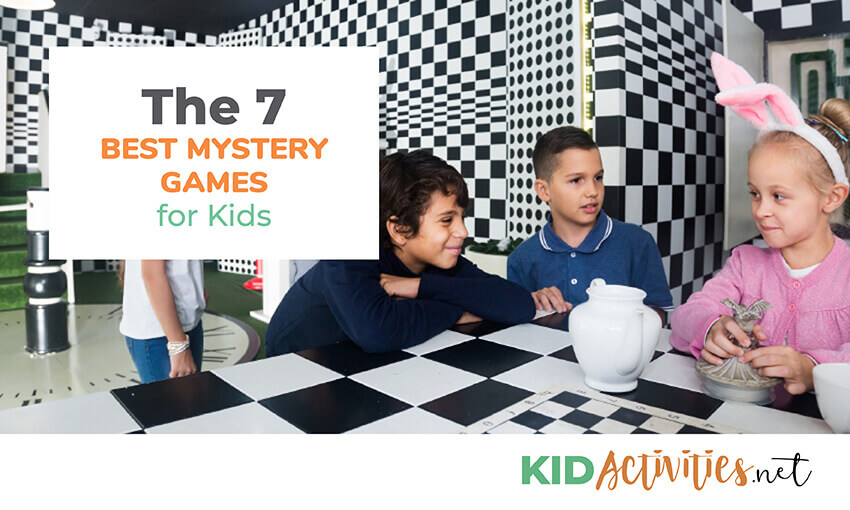 The Best Mystery Games for Kids

This list of the best mystery games for kids that are bound to have both your children and yourself excited about game’s night. Once you decide which game will be ideal for your family, settle in and be prepared for a night of twists, turns, and suspense. 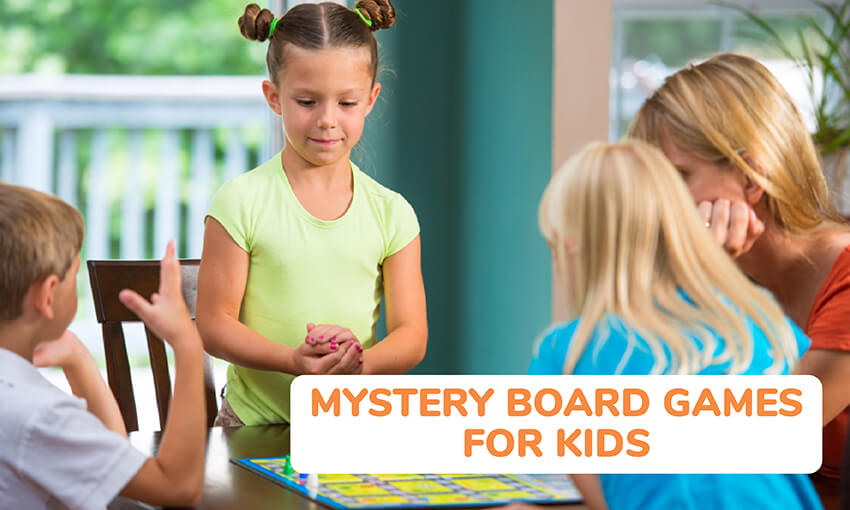 ThinkFun Cat Crimes Brain Game and Brainteaser for Boys and Girls Age 8 and Up - A Smart Game with a Fun Theme and Hilarious Artwork
$14.99
Buy on Amazon

Cat Crimes is a board game made by ThinkFun, a world leader in brain and logic games, that combines increasingly difficult challenges with a quirky, fun theme. This game is a single-player, mysterious deductive thinking board game and is suitable for those aged 8 and over. Included in the box are the game board, 6 cat pieces, 6 crime tokens, a well-written, clear instruction manual and 40 challenges, along with their solutions. The scenarios on the challenge cards range from beginner to expert level, so as you progress, so does the difficulty.

The aim of the game is to identify the culprit of the crime. The six suspect cards feature different cats with varying characteristics and the board game supplies supporting evidence to help you figure out who the cat criminal is.

The Secret Door, made by Family Pastimes, is an award-winning co-operative mystery game that has been constructed to be suited for ages 5 and over — perfect for the entire family! It can be played with between 1 and 8 players but it has been stated that 2 to 5 players are best for maximum enjoyment. Included in the box is the full-color game board, rule book, clock cards, set of valuables and the elusive secret door.

Valuables have been stolen from the mansion and your task is to find them. You will adventure around the mansion’s rooms to try and find the valuables behind the secret door before midnight. If the clock strikes 12 — it is game over and the thieves will have made off with all of the hidden treasure!

You and your family will absolutely love playing this game, as each time it brings fresh and exciting mysteries to work together to solve. Not only will it promote teamwork, but it will also encourage creative thinking, decisive reasoning, and memory usage — a brilliant, fun tool to promote cognitive growth in your children.

3. Betrayal at House on the Hill

Avalon Hill Betrayal at House on the Hill, Green
$59.99
Buy on Amazon

Betrayal at House on the Hill is a board game for those aged 12 and over. It is a perfect game for parties and family gatherings as it is designed to be played with 3-6 people. This has been carefully crafted for those who love the build-up of suspense and excitement, as players create their spooky version of the game every time.

It is a tile game that enables you to make your own very own haunted house, each room at a time. Along the way, you will come face to face with spirits and terrifying tellings of your fate — Wizards of the Coast, the company who produced this game, has achieved the thrill of real-life haunted houses exceptionally well. Each player will be acting as one of the 6 possible characters and, without knowing it, one of your circle will have betrayed everyone and the aim for the innocent ones is to figure out who the traitor is before time runs out.

The box includes everything you will need for gameplay namely the intricate game pieces, 6 double-sided character cards, 6 painted plastic figures, 8 dice, 30 plastic clips, rule book, 2 haunt books (Secrets of Survival and Traitor’s Tome) and finally, special tokens. Taking a closer look at the components of the game, you shall notice that the ‘intricate game pieces’ come in a variety of forms which are: 44 room tiles, one entrance hall tile, 1 turn/damage track, 13 omen cards, 45 event cards and 22 item cards. Alongside all this, the special tokens also hold many different forms too, these are 204 monster tokens, 14 event and room tokens, 12 larger monster tokens, 43 item tokens and 18 trait roll tokens.

Gameplay, as you may imagine, is fairly lengthy at roughly an hour — again, this is why it is ideal for parties and gatherings.

On Your Turn, You Can Either:

You can only move the number of spaces that is exactly equal to your character’s denoted speed rating. However, if a game effect forces you to draw a card, you cannot move again for the rest of that turn.

If you have moved through a doorway that doesn’t lead to another room, you need to look at the room stack’s top tile. If this tile states the name of the floor you are currently on, turn it over and add it to the doorway you have just moved through and then enter that room.

However, if the tile cannot be positioned on the floor you are on, discard it. You will then need to continue doing this until a tile appears that you can work with.

All doors are constantly open, except for the front door which you can never use unless game effects state differently.

At points during gameplay, you will be asked to roll dice. If a card explicitly says to roll a certain number of dice, do it and add the number of spots on all dice to get the final number. Simply follow the card’s instructions after that. The same goes for if a room tile says to roll for one of your explorer’s traits except you will role the number of dice that is equal to your character’s trait figure.

You can use an item once per turn and the majority of omen cards are for you to keep — except for one. During your turn, you can either drop some items and then leave an ‘Item Pile’ token in that room so other characters can pick them up, give an item to another player or pick any number from a pile.

Remember, you cannot attack until after ‘the haunt’ starts but once it has begun, you can combat once per turn with another character that is in the same room as you.

When attacking, both counterparts roll the number of dice that is equivalent to your character’s ‘Might’, whoever has the highest result is the one who inflicts the damage on their opponent. If you have been unlucky and are the one who has taken damage, you move your ‘Might’ or ‘Speed’ trait down a number of spaces equal to the damage figure.

The game ends when one side — either the traitor or heroes — has completed their goal. At this point, someone from the winning side would read the ‘If You Win’ section of the book to the rest of the group.

There are, of course, many other rules and unique twists and turns to this game which is why it is aimed at the older child and their families. Once everyone has got the hang of it though, it truly is an intensely fun and suspenseful game for all.

ThinkFun Escape the Room Stargazer's Manor - An Escape Room Experience in a Box For Age 10 and Up
$24.43
Buy on Amazon

Another game by the brand ThinkFun! This time it is for 3-8 players who are age 10 and over, rather than a single-player gig. Not only does this provide hours fun, but it also develops children’s critical thinking and decision-making skills which will set them up well for the future. In the box, there is everything you will need to play including the clear instruction booklet, scene card, 5 sealed envelopes with secret items hidden inside and the solution wheel.

The storyline takes you on a journey where you were, at one point, employed by the famous astronomer but were unfortunately fired after many years serving him. In the present day, your old employer is a recluse who has been holed up in his mansion with nothing but odd noises and alien-like lighting escaping from the windows. You and your team of investigators will enter the manor in the hopes of uncovering the secrets that have been held behind these doors for so long.

Jumanji Escape Room was developed by Cardinal Games and has been designed to be suited for anyone aged 10 and above. It has been made to be enjoyed by between 3-5 people at any one time and cooperative focused game.

Inside the box, you will find an electronic Chrono Decoder that provides sound effects and the timer function, a 15-minute intro game (named The Drumming Closet), two 60-minute adventures (named, The Search for Jesse and Break the Curse), hint card decoder, 8 keys, 2 sets of 8 hint cards and the rulebook. The aim of the game, as you might imagine, is to escape the room within the allotted time frame.

Now, for those of you who have younger children who want to be a part of a mystery game, Outfoxed! is for you. It has been designed to be played by those aged 5 and above and can be played with no less than 2-4 people at one time. The game lasts for around 20-30 minutes so is fantastic for those children with shorter attention spans.

In this game, you will need to catch the fox before he escapes with Mrs. Plumpert’s award-winning pot pie. You will all be working together to solve the mystery by eliminating suspects one by one until you catch the naughty guy!

You will find everything you need inside the box including 16 suspect cards, 16 thief cards, 12 clue markers, 4 detective hats, 3 custom dice, 1 fox, 1 clue decoder and 1 beautifully-designed game board.

If all three dice show the clue icon (pawprint) after you have taken your allocated three attempts, then you will be able to search for the clues.

To do this, add up all the footprints on the dice and move your hat that number of spaces along the board. If the space you land on shows a pawprint, pick up the top clue marker and put it in the clue decoder. Once you have done that, open it and have a look to see whether the color showing through is green or red. Green means you haven’t found a clue, whereas red means that you have. You will then be able to eliminate a face-up suspect based on what you’ve seen.

After that, you will need to close the slider and place the clue marker on the space where you landed, thus, ending your turn.

If all three dice show the suspects icon (eye) after you have taken your allocated three attempts, then you will be able to reveal them.

To do this, you will turn two facedown suspect cards to the face-up position. Once this has been done, you can look at all the clue markers that are face-up and check whether or not any of them are wearing the items.

Spy Alley has won 12 national awards including Australian Game of the Year and MENSA Select. The game was made to be played by 2-6 people aged 8 and over — it truly is fun for everyone. You and your family will be deceiving and second-guessing all your friends and family with this one! Both the children and adults in your party will be using their deductive reasoning, body language reading and logic skills to become the best spy in the world.

Included in the box are 6 spy identification cards, scorecard, pens, cards, money, game board and finally, game markers. Everything you need to play is inside!

So, now you know the best mystery games for kids, you are fully equipped to go out and host the best game night ever! If you are looking for more fun games check out our would you rather questions or our charades ideas. 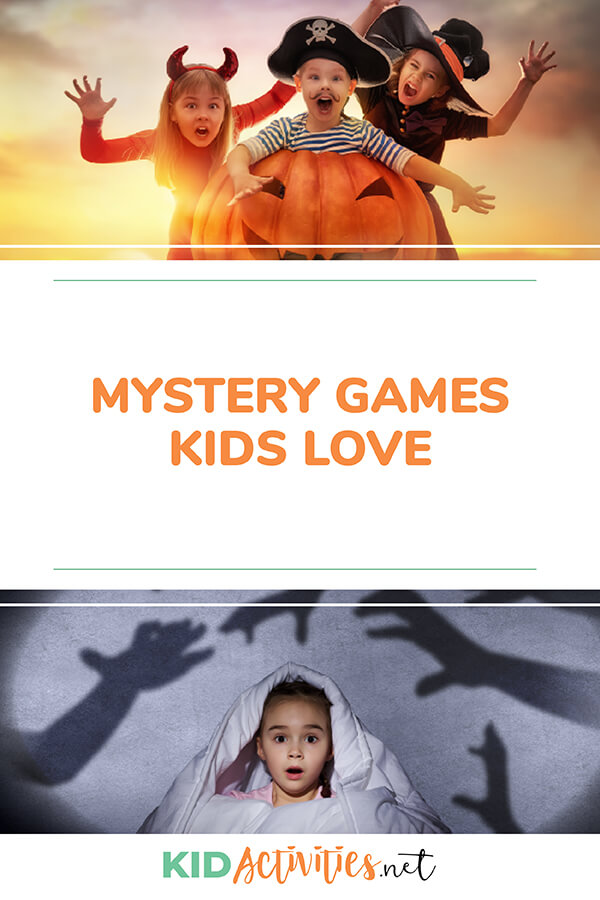 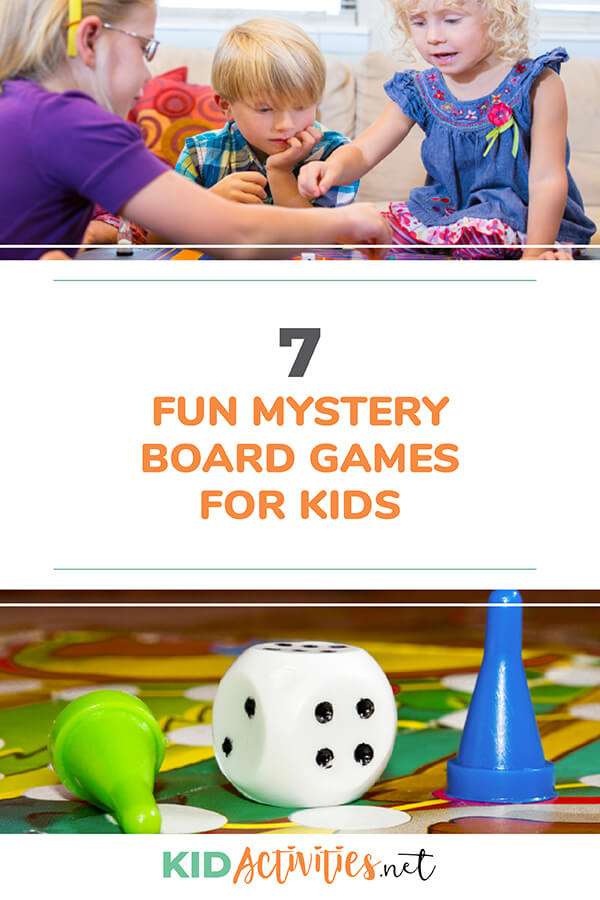