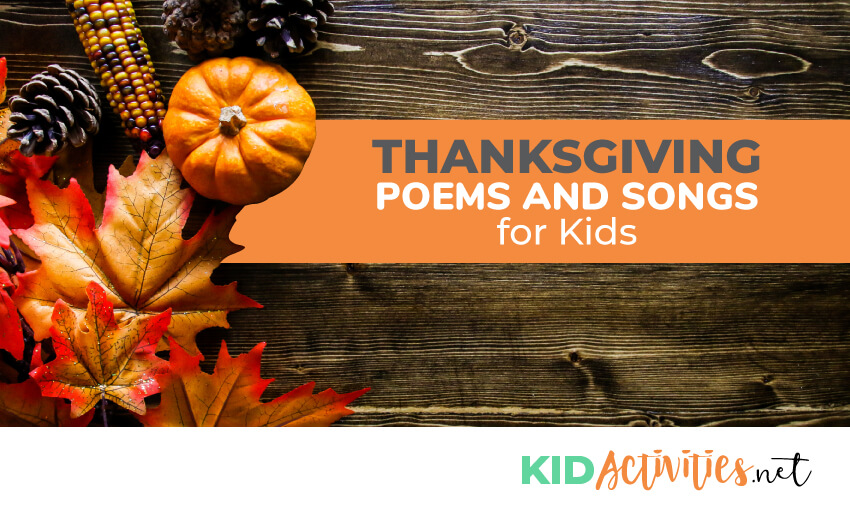 Find a collection of classic Thanksgiving songs and poems for kids. These are great to use in the classroom and get the kids in the holiday spirit.

Have the children write or dictate their own recipes for a Thanksgiving feast. Write each recipe on a large index card and ask them to illustrate their recipes. Then mount the recipe cards below the pictures.

Give each child a clip-art decorated page and have them write or dictate their favorite recipe (from their perspective) and compile all into a “center cook book”. You will come out with a very humorous book!

You could also put the recipes together and make a “Class  Book” to display at your parents’ center.

Ask each child to bring a favorite “real” Thanksgiving Family recipe from home. Compile all and make a cookbook for each family! 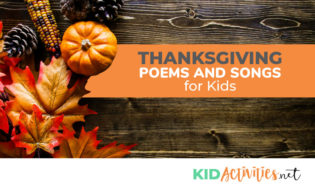 TURKEY DAY WISH…
This would be really cute for your November Newsletter (October if you live in Canada) or posted at your ‘Info Center’. It could also be said at your Turkey-Day table!!!

May your stuffing be tasty,
May your Turkey be plump…
May your potatoes and gravy have nary a lump.
May your yams be delicious,
May your pies take the prize…
May your Thanksgiving dinner stay off of your thighs.

5 little turkeys were standing by a door…
One saw some corn, and then there were four.
Run, Run, Run far away. Soon it will be Thanksgiving Day!

4 little turkeys flew up in a tree…
One fell down and then there were three.
Run, Run, Run far away. Soon it will be Thanksgiving Day!

3 little turkeys gobbled as they do…
A dog chased one and then there were two.
Run, Run, Run far away. Soon it will be Thanksgiving Day!

2 little turkeys strutting in the sun…
The wind came along and then there was one.
Run, Run, Run far away. Soon it will be Thanksgiving Day!

1 little turkey saw a farmer come; He ran far away and then there were NONE!

Five little turkeys standing at the door,
One waddled off, and then there were four.

Four little turkeys sitting near a tree,
One waddled off,and then there were three.

Three little turkeys with nothing to do,
One waddled off, and then there were two.

Two little turkeys in the morning sun,
One waddled off, and then there was one.

One little turkey better run away,
For soon it will be Thanksgiving Day.

The turkey is a funny bird
Its head goes bobble-bobble…

And all he knows is just one word…
And that is GOBBLE-GOBBLE!

Children took home a copy of a plain turkey. The fun was to disguise the turkey in a creative manner! If you’re concerned that parents in your program are in the mist of time-challenge constraints–form groups of 2 to 4 children to come up with their own version of a “Disguised Turkey”!  Create a wonderful display with their vision! 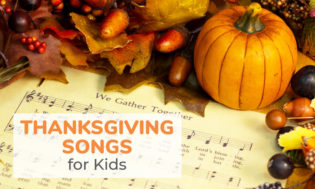 (Sung to tune of: My Darlin Clementine)

Albuquerque is a turkey
And he’s feathered and he’s fine…
And he wobbles and he gobbles
And he’s absolutely mine!

He’s the best pet you can get yet
Better than a dog or cat
He’s my Albuquerque turkey
And I’m awfully proud of that!

Instead of the Hokey Pokey Dance–do THE TURKEY JERKY

LYRICS TO ‘OVER THE RIVER AND THROUGH THE WOODS’…


Over the river and through the woods
To Grandfather’s house we go.
The horse knows the way
To carry the sleigh
Through white and drifted snow.

Over the river and through the wood —
Oh, how the wind does blow!
It stings the toes
And bites the nose,
As over the ground we go.

Over the river and through the wood
To have a first-rate play.
Hear the bells ring,
Ting-a-ling-ling!
Hurrah for Thanksgiving Day!

Over the river and through the wood,
Trot fast, my dapple gray!
Spring over the ground
Like a hunting hound,
For this is Thanksgiving Day.

Over the river and through the wood,
And straight through the barnyard gate.
We seem to go
Extremely slow —
It is so hard to wait!

Over the river and through the wood —
Now Grandmother’s cap I spy!
Hurrah for fun!
Is the pudding done?
Hurray for the pumpkin pie!

TURKEY QUIZ & DISCUSSION–HOW MUCH DO YOU KNOW?

The turkey is one of the most famous birds in North America.  In fact, Benjamin Franklin wanted to make the wild turkey, not the Bald Eagle, the national bird of the United States!

1. A male turkey is called a Tom or a Gobbler.

2. A female turkey is called a hen.

3. A poult is a baby turkey.(A chick)
When the  poults hatch, they flock with their mother all year including the winter).
After the turkey begins to grow–A young male turkey is called a “jake” and a young female is called a “jenney.”

4. A Wattle is the flap of skin under the turkey’s chin. It turns bright red when the turkey is upset or during courtship.

5. A Gizzard is  part of a bird’s stomach that contains tiny stones.  It helps them grind up food for digestion.

6. The caruncle is the growth of skin that dangle from the turkey’s chin–the throat region. It turns bright red when the turkey is upset or during courtship.

7. The snood is the growth of skin that droops over the gobbler’s bill. (The flap of skin that hangs over the turkey’s beak) It turns bright red when the turkey is upset or during courtship.

9. A turkey hen lays an average of eight to 17 eggs. She lays them one at a time in a nest built on the ground. After several weeks when all the eggs have been laid, she begins to sit on them to incubate, or keep them warm. After 28 days the eggs are ready to hatch.

Wild turkeys can run fast—up to 25 miles per hour. They can also fly up to 50 miles per hour. In the right conditions (still and quiet), a turkey’s gobble can be heard up to one mile away!

Check out the Category with Thanksgiving Jokes!

1.) Weeks ahead—Post and hand-out a save-the date. Invite parents to attend and have them sign up to bring in foods traditional to Thanksgiving such as:
Turkey, sweet potatoes, vegetables, applesauce, pies, fruits, etc.

2.) Estimate the amounts you will need and put out a sign-up sheet with how much you’ll need.

3.) Parents then sign up for their choice. Be sure to tell them to bring their contribution ready to go and serve!
Have the center provide juice, water, sturdy plates, napkins and utensils.

4.) Time is short for us all; however, there are so many good food stores that make excellent turkey breast, chicken pieces, potatoes, fruit, etc. Tell families their contribution does not need to be home-made!

5.) For the feast, have children make THEMED-PLACE MATS and decorations the weeks before the event! Give all a role in the fun celebration!

All books are at Library, bookstores, and Amazon.com