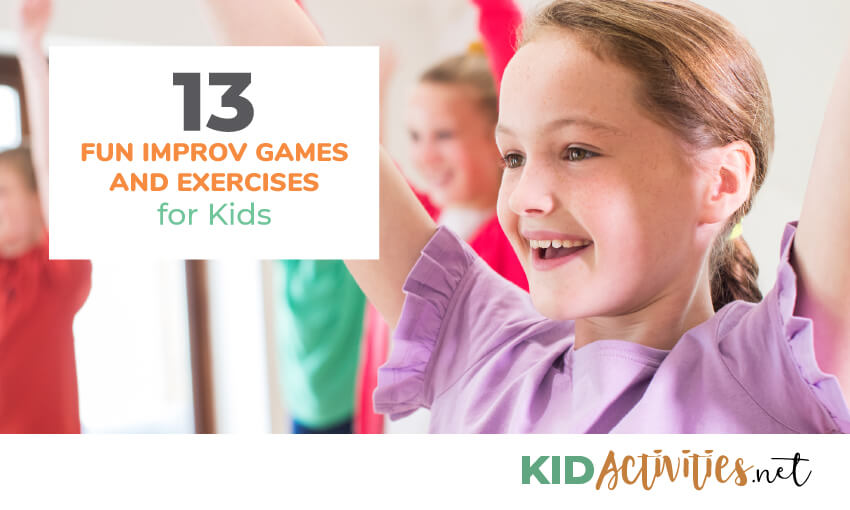 Looking for some fun improv games for kids? Look no further. Here you will find an extensive list of improv activities that will lead to hours of fun and laughter. Improv is a great way to boost social skills, teamwork, and critical thinking.

The first thing to teach the participating group is the word Chivalry.

In improv, Chivalry means not clinging to your own ideas, your own status, or personality as a character. Chivalry is daring to give up control. Players should allow themselves to be changed by other players. They should be happy to change; change in improv is a good thing! 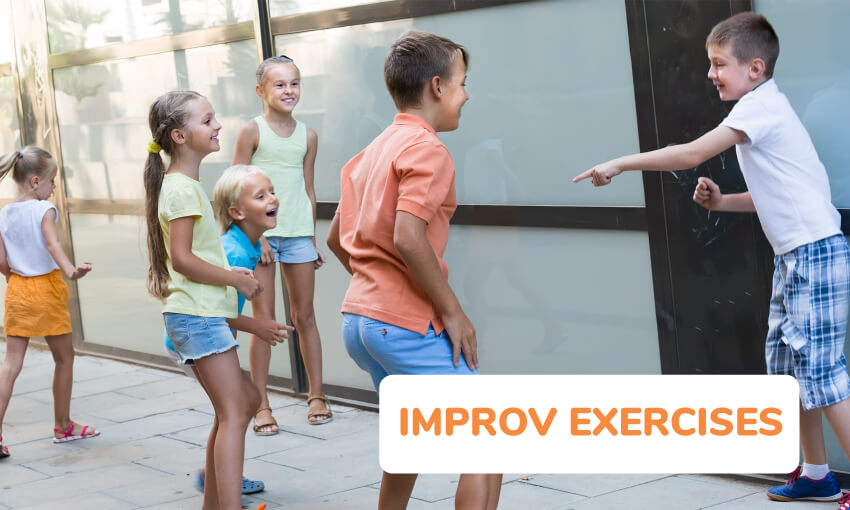 1. WHAT HAPPENED NEXT IMPROV EXERCISE

One player is in the middle, the others sit aside. Any person can give the middle player a task, which she performs, and then she asks, `What happens next?’ Any player may suggest what needs to happen next, but the idea is for the group to construct a coherent story. The player in the middle should only and strictly be doing what they’re told; it is up to the players at the side to construct the story. This game is also known as And Then.

This is a great drama practice and a great introduction to Accepting.
Pick a group activity, such as throwing a party or organizing a picnic. One player starts, saying, “Let’s ______,” filling in what they want to do. Then, they actually start doing what they said they wanted to do. A second player jumps in, saying, “Let’s________.” (It’s doing something else– to advance the group activity.) Both players say, “Yes, let’s do that,” and start doing whatever was suggested. The third player jumps in and suggests what to do, and again, all the players loudly agree to do it and actually do it. Continue till everyone has suggested something.

Everyone is positioned in a big circle, squatting down. All participants count 1 to 10. This is done in unison — moving up slowly with increasing energy level. 1 is barely audible, 10 is as loud as possible—with everyone standing straight, hands reaching up. It’s important to watch each other, to ensure all are at the same energy level. Also, make sure that the increase in energy is very gradual. 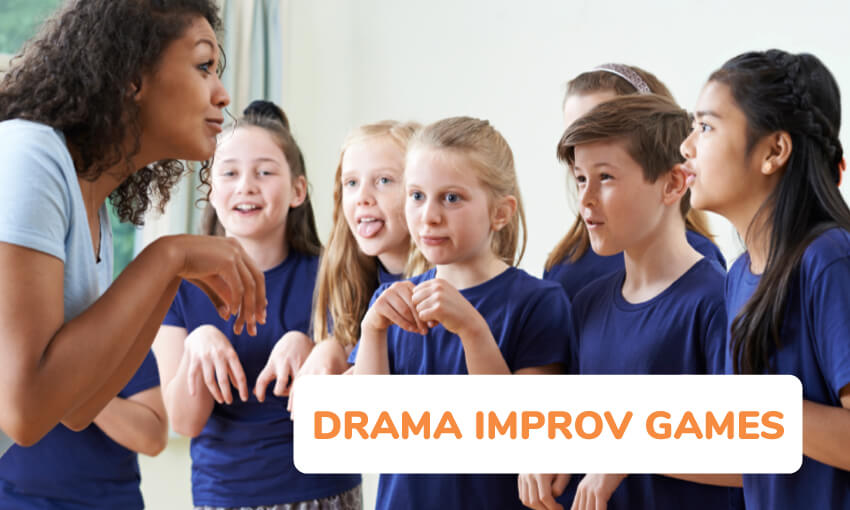 (To prevent confusion, write directions for characters on a whiteboard.)
Everyone is in a circle. There are 3 things a player can be:

• An Alien: hold your index fingers up next to your head, as little antennae and say `Bleeb bleeb,` bending inwards into the circle.

• A Cow: bend forward, hold your right hand on your tummy and go `Moooo.`

• A Tiger: push your right hand forward, imitating a claw and roar.

On your signal, each player becomes one of the three. The idea is for everyone to become the same, which obviously won’t be the case the first time. Re-do this until everyone is in sync.

Everyone finds themselves a spot and squats down. The facilitator talks the group through the exercise.

“Everyone is a piece of corn, the floor is a big pan, and we’re going to make popcorn. We slowly start heating the pan.” As the pan gets hotter, the corn starts to `pop.`  A player `pops` by jumping up, clapping hands above their head, and saying `pop.` Make sure the `popping` starts gradually, `popping` is a group thing, and in the end, `popping` should stop.
Variation: Forget to take the pan off the fireplace and have the popcorn start burning.
________________

6. ONE WORD AT A TIME STORY

This is an exercise to train a group narrative. All players sit in a circle. A story is told one word at a time. Each player provides one word of a sentence. The end of a sentence can be indicated by a player saying `period` although that is unnecessary.

This is more difficult than it sounds, especially with newbies. If you’re working with novice players, have them try a familiar story, such as Snow White & the Seven Dwarfs. Summarize the story before they get started, to make sure they’re all on the same story. Don’t be surprised if gagsters smuggle atomic bombs and crashing aircraft into the story. If so, ask the group if they can see/understand the reasons their story isn’t as it could be. If the group is large, divide it into 2 or more story circles.

Form a circle with improv participants. One person starts by saying, “Did you hear about _____?” and then points to someone else in the group. That player immediately replies with the answer to the fill in blank., after which everyone gasps or giggles. The person left of the second person restarts. The blanks can be anything: something as simple as soup, or something as convoluted as the white bear that ate a Russian kid for lunch in Novosibirsk last Thursday.

Put everyone in a big circle. One player starts by making a little gesture, perhaps with a little sound.
His or her neighbor then tries to do exactly the same. This continues around the circle. Although we expect the gesture/sound not to change, it will!
Watch for movements that suddenly change a left/right arm or leg. This is not supposed to happen, but it will. Once happened, it should be accepted by the next player.
Also, watch/listen for little moans or sighs that players might make before or after their turn – these should also be taken over by the next player.
_______________

Players are in pairs, facing each other. One talks in gibberish, with a specific emotion (angry, happy, in love, your choice). The other instantly copies the emotion of the first player and speaks in his own gibberish. There is no need to try and copy the other player’s gibberish; both players keep talking—no pausing allowed. After about 10 seconds, the second player changes emotion, and the first one immediately follows.

Range: 9+ (Number of Participants: 2-20)
Materials: Pictures of people, as many as participants. See Notes.
Participants will use pictures as inspiration in creating characters and interact with others as their characters. They will try to determine which picture the other participants used for their inspiration after interacting with them.

Participants spread themselves out in the room so each person has enough space to think without distractions.
The leader passes out a picture to each participant, explaining, “DO NOT let anyone else, even me, see your picture. You have three minutes to look at the person in your picture and become that person. Decide what kind of personality he or she has, how old the person is, what kind of life they lead, etc. Use the picture to help you decide – are there details about the person’s clothes, their surroundings, and their face which give you ideas? Try to create a “story” for this person, and a voice, mannerisms, attitude.

At the end of this time, the leader asks everyone to discard their characters and become themselves.
The leader then shows the participants the pictures that were used and asks the group to identify whose character matches with the picture. Don’t tell the participants that this will happen ahead of time. The temptation of “fooling” everyone is too great to resist for some people, and these people will purposefully make their character unlike their picture if they know there will be guessing. The group should discuss their reactions to their pictures and to others’ and how everyone developed their character.

Notes:
The pictures can be cut out of magazines, and then pasted onto oak tag or poster board for stability. Try to get a good assortment of pictures of people – all ages, races, levels of attractiveness; don’t put any famous faces in the selection. The more interesting the setting and the appearance of the person, the more there is for the participants to use for inspiration. Remember, there are no wrong answers – but the participants should be able to answer “why” questions about the character and picture.

Everyone is numbered around the circle as 1, 2, OR 3. The leader calls a number such as 2. All number 2s must cross the circle in one role of leader’s choice as:
• A ballerina
• A panther
• A moonwalker
• Someone who’s stuck in the mud
• A fashion model
• Whatever your imagination comes up with!
After all the number 2s cross the circle, a different number is called; they are told to cross the circle in the manner the lead directs.

Name a child to cross the circle to an empty chair in any way they like…walk…crawl…hop…twirl…whatever. They call someone else who must cross in a different way.

Players find a partner; partners separate and run around. The leader calls out a phrase and the players must find their partner and depict the scene. The last pair to depict the scene is out.
Examples:
• Frog on a log: One student gets down on all fours (log) and the frog sits gently on their back.
• Bird on a perch: One student gets down on one knee (perch) and the bird sits on the perch.
• Lion in a den: One person stands with their feet apart (den) and the lion lies down on the floor.

• Make choices based on actions

• Do give and take

• Work to the top of your intelligence