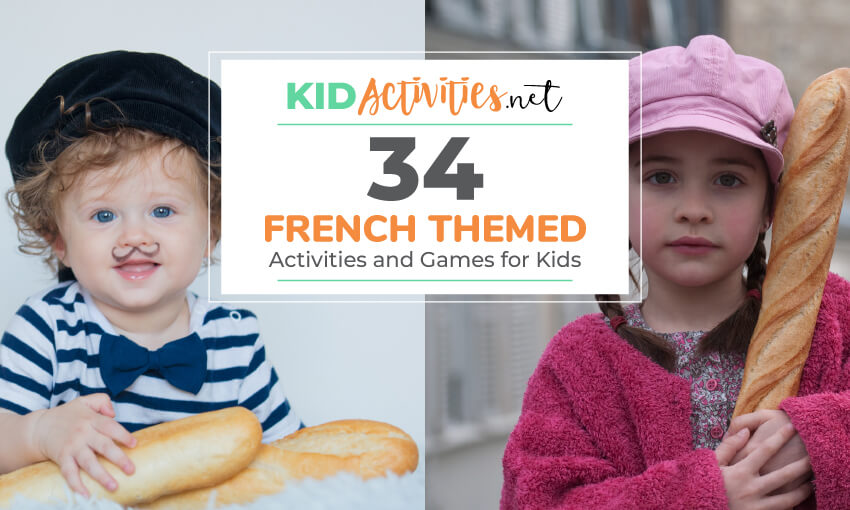 Are you looking for French Day Activities including French Games For Kids and French art activities For Kids?  You’ve reached the right place!  This guide will share 34 fun French theme activities for kids that will keep your students or children busy for hours.

Why teach children about France?  Kids love learning about other cultures and the histories of other countries.  France is a particularly interesting country because of its rich culinary traditions and close ties with the United States

This article is packed with:

Let’s check them out! 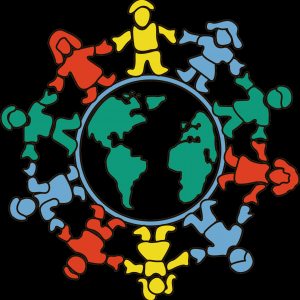 ‘Traveling Around the World’ are great themes for multicultural experiences as well as popular for classroom, day camp and childcare programs!

Category resources available at this time are:

Paris…one of the fashion centers of the world! So naturally let’s HOLD A FASHION SHOW!

Following are three different ideas… (From Drama Category)
This is fun for Day Camp, in stages for an event …or full days of programming…

Props that would be helpful are: spotlights; a backdrop; if possible, a raised platform/ stage or catwalk; music and sound system…

First session: Putting on a fashion show can be fun for all players, especially if everyone gets to choose the role they will play. In the planning stages, have participants decide on a theme for the show (such as fall fashions or holiday outfits); plan music and which roles children will play. Both male and female models would be nice; you’ll also need designers, emcees, a journalist or two, and photographer.

Help the players plan the set up; where youth will enter and exit—as well as where the audience will sit. Make a list of special clothing to wear during the show and any other props you may need. If you have the “#3-WACKY” version below—you’ll also have to make the outfits…

Second session: Give members time to set up the show and get organized. Get the audience seated a let the show begin!

Rehearse a fashion show in which EVERYTHING GOES WRONG! (On purpose) It’s fun but not easy to do. Example: The emcee trips over the microphone cord, or models wear things that don’t fit—and don’t go together. Think of all the silliness you can!

One activity that I facilitated while managing a summer camp was to have a “WACKY HAIR-DO AND FASHION SHOW”.

The staff and kids “in fantasy fashion” back-combed, jelled and styled each others hair—while others designed, drew, cut-out and taped outfits using ROLL-PAPER. They also used paints/ markers, tape and accessories! Of course, there was also the fantasy make-up. It was great fun!!! (Barb Shelby) When the hair and costumes were complete…a show was held for the rest of the day-campers!

NOTE: Any of the final stage above ideas would be great for a family event. 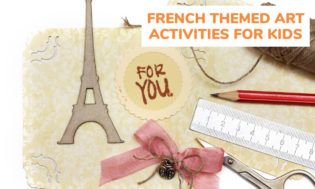 Put up MAPS of France and make FRENCH FLAGS! ALSO…

Hang (or make) a large French flag on the wall; set up a PHOTOGRAPHY AREA in front of the flag where you can take photos of kids. (Be sure to first get parental permission to photograph)

In big bold letters–write some of the French words (See below in teaching French words) and phrases on card-stock. Hang these  on the walls! You could write the words in French and English (or your language)… or put pictures below the French word! The children will literally be reading the walls!  They make fun french lessons for kids.

Get plenty of blue, white and red BALLOONS for your decorations. These represent the three colors of the French tricolor.

Have all children and staff members wear versions of BLUE, WHITE, AND RED!

You can  challenge the children to make Eifel Towers using any of the above materials! If using Legos…Gather all you can and see what the kids come up with…the tallest, straightest, most curvy, smallest, unique, realistic, etc.

There is also a great idea below under ‘GAMES at #6’…where kids team up and build towers using ‘STRAWS AND TAPE’!

Visit the ‘Paint and Color Recipe/Idea Category’ on this site as well as ‘Art Activities Category’! Tons of wonderful ideas to try…

PAINT IMPRESSIONIST MURALS …do this with small groups of kids for each mural.

For fun and an authentic French atmosphere, set up an OPEN AIR MARKET AND CAFE AREA.

with French words such as ‘Oui’! 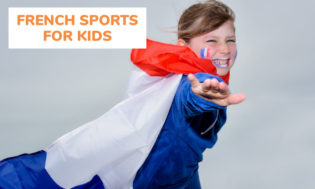 HAVE A BIKE DAY- (In honor of Tour de France –

Have the kids bring their bikes and have a bike race–but make it the ‘SLOWEST BIKE’ IS THE WINNER!

SLOW BICYCLE RACE… How slowly can you ride a bike without touching the ground?
Safety Rules… 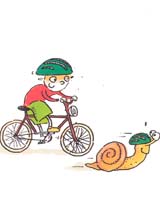 You must wear a helmet on your head when you are on a bike and both wheels of the bike must be on the ground at all times, so…

Directions: Each person will ride a bike through a track two times in a row. Make the track a rectangle about 20 feet (6 meters) long and 2 feet (60 centimeters) wide. You have to ride the bike through the track as slowly as you can. Use a stopwatch to time how long each ride takes:

To calculate how slow your team went– you need to know:

Using crepe paper and streamers, have the kids DECORATE THEIR BIKES with blue, white, and red crepe paper (Colors of France.) You can also attach playing cards to the frame so they hit the spokes & sound like a wheel of fortune. 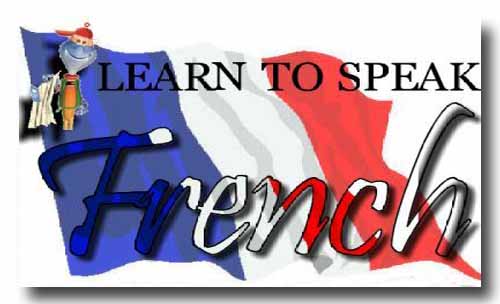 DOES ANY STAFF MEMBER SPEAK FRENCH?

To incorporate a foreign language into your curriculum, all one needs is first year language!

Teaching greetings, ‘Thank-you and Your Welcome, ‘Yes and No’ –along with a few phrases and numbers is all that is needed for fun french lessons for kids.

If no-one speaks French-can you invite someone that does?

…Sing in French and then in English! When children know the words…get a round going!

A more literal translation of the French lyrics is: 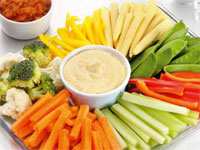 Karen, a middle school French teacher, shares that a favorite of her students on food days is the chocolate sandwich.
Take two pieces of bread (French, bien sur!) and put a plain chocolate bar in between. Voila! A typical French child’s favorite afterschool snack.

Do you have an adventurous group of kids? Send home a permission slip for snail tasting… TAKE PHOTOS and award an “I ate an escargot” certificate! 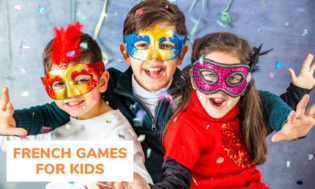 A GAME to go with the above ‘French Fashion’ Theme

1. Form a circle. Each person chooses one other person in the circle to secretly watch.
2. Everyone closes their eyes and strikes a pose.
3. On “GO” — everyone opens their eyes and begins to copy the person they chose to watch. (In posture, pose, stance, etc.)
Watch as the whole team morphs into the same pose!

Set up the COMPUTER CENTER with language learning games.

PLAY ‘Jacques Dit’ which is ‘Simon Says’ in French

Have an EIFFEL TOWER BUILDING CONTEST!

BE SURE TO LEAVE the towers on display in the ‘Open Air Market’ or ‘Cafe’ area! (Maybe a wide hall area or in the cafeteria of your camp or program space?)

How was the Eiffel Tower Built?  Watch this video:

Select an older child, staff member or volunteer French Class student to be a tour guide. Have the ‘Tour Guide”  facilitate a   scavenger hunt for famous Paris monuments. The monuments can be pictures, posters and postcards scattered around the inside and outside of the building!

You could also include Picasso. Although born in Spain, he spent much of his life living and painting in Paris. Along with Henri Matisse, he is considered one of the greatest artists of the 20th century.

TEACH/PLAY THE TRADITIONAL GAME OF PETANQUÉ or French lawn bowling…The game of boules, otherwise known as petanqué, is perhaps the sport that is closest to French hearts. Similar to British lawn bowling or Italian bocce. However, with bocce–the ball is rolled and with pétanque the ball is thrown.

Honoring both the ART AND FASHION OF FRANCE–PLAY ‘ARTISTS AND BLOBS’.

The artist (s) forms his/her partner into some kind of statue. The blob relaxes as much as possible until the statue is formed, then tries to hold that pose. (TIP: PLAY MUSIC while artists are forming blobs. It goes a lot better with music in the background.) When art works are complete have artists walk about and admire each other’s creations! 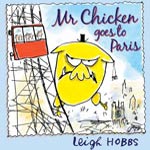 The following ideas come from a visitor to KidActivities who happens to facilitate a French Club for High School Students!

Hello, I just wanted to add some suggestions to the French Page of your site. (I stumbled upon it looking for ideas for my French Club in high school this year)

A good children’s book is “Mr Chicken goes to Paris” by Leigh Hobbs. I bought this book at the Louvre in France. I though it was ridiculous, but I couldn’t put it down. It is an adorable book, with humor I’ve found people of all ages love.
Best Regards,
-K. Leann

Thank you for taking the time to send this Ms. Leann! Barb

(All books can be purchased at Amazon.com-starting used at .01 cents!)

‘Traveling Around the World’ are great themes for multicultural experiences as well as popular for classroom, day camp and childcare programs! Category resources available at this time are:
•CHINA  •FRANCE  •MEXICO  •USA-PATRIOTIC  •USA-COLONIAL  •All Multicultural Diversity Categories