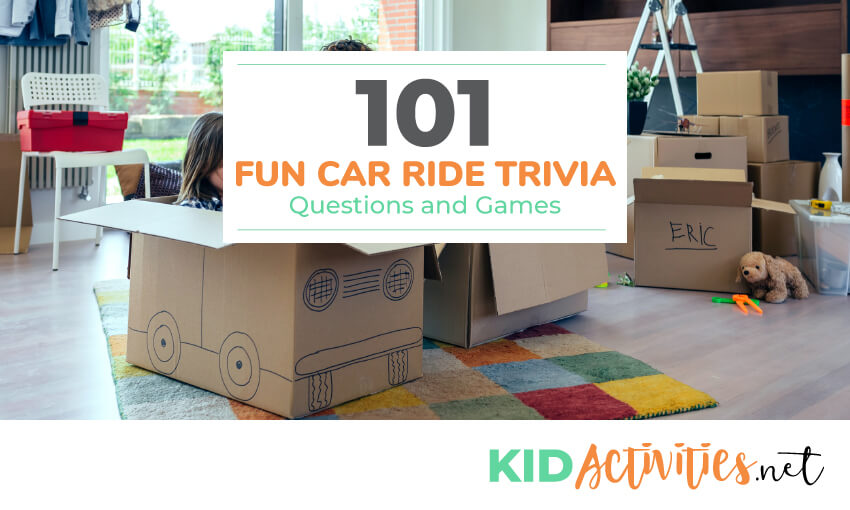 Trivia is always fun no matter if you’re having a party, entertaining dinner guests, or traveling. You’re never too young or too old to enjoy learning new things and it’s a great way to communicate with the kids.

If you’re preparing your packing list for your family vacation, you will want to be sure and add some fun travel games to the list. That’s why we’ve taken the time to prepare this list of 101 fun car ride trivia questions and games so that you don’t need to worry about the kids getting bored.

On this list, you will find questions appropriate for the occasion. They contain some questions that are easy and some that are hard but no need to worry because we’ve even added the answers!

So, put down the phones, hide the tablets, and pull out this list, but wait there’s more! When you have conquered these 101 questions, we have also included a list of 5 car ride trivia games that you can buy from Amazon. 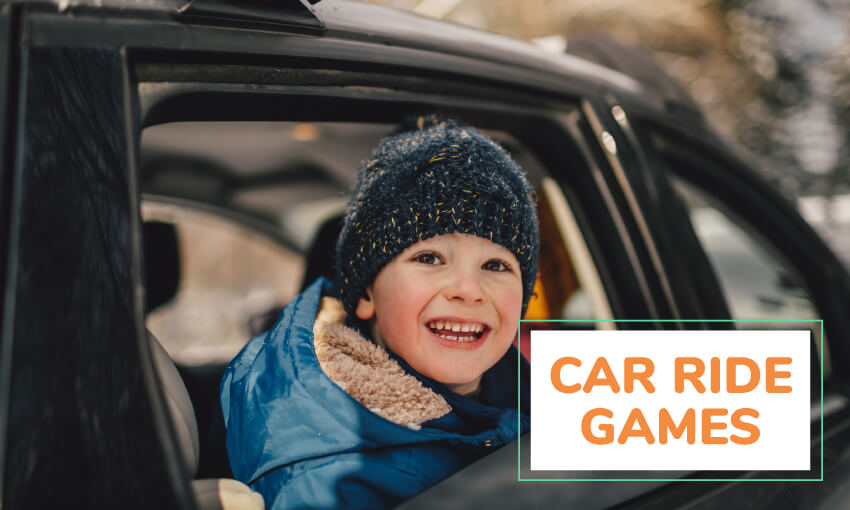 When you run out of trivia questions you can pull out one of the following games that are designed for easy travel. 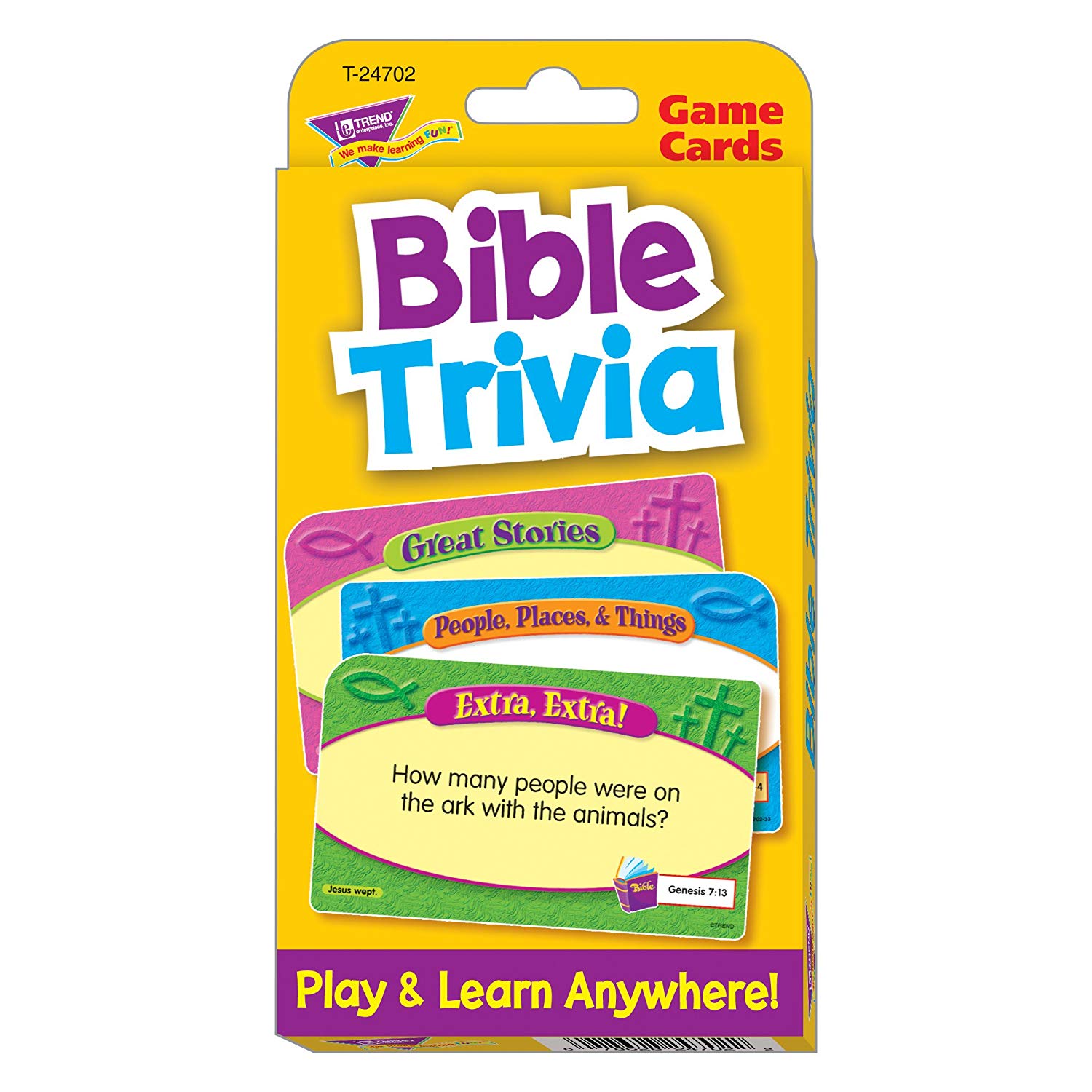 These cards are perfect for long or short car rides with the whole family. There are fifty-six compact and easy to carry cards in a lightweight box. They can easily be stored with the books and other activities you carry in the car.

Intended for ages 6 and older, this game is designed for early learners as well as those who want to test their Bible skills. Each card provides two different levels and there are four Bible trivia categories to choose from. Each question and answer card provide the Bible verse for reference if you are looking to dive in deeper with a fun Bible study with the kids.

This trivia game is a fun learning aid that can be played by everyone and it will make the otherwise long trip ahead seem much more enjoyable! 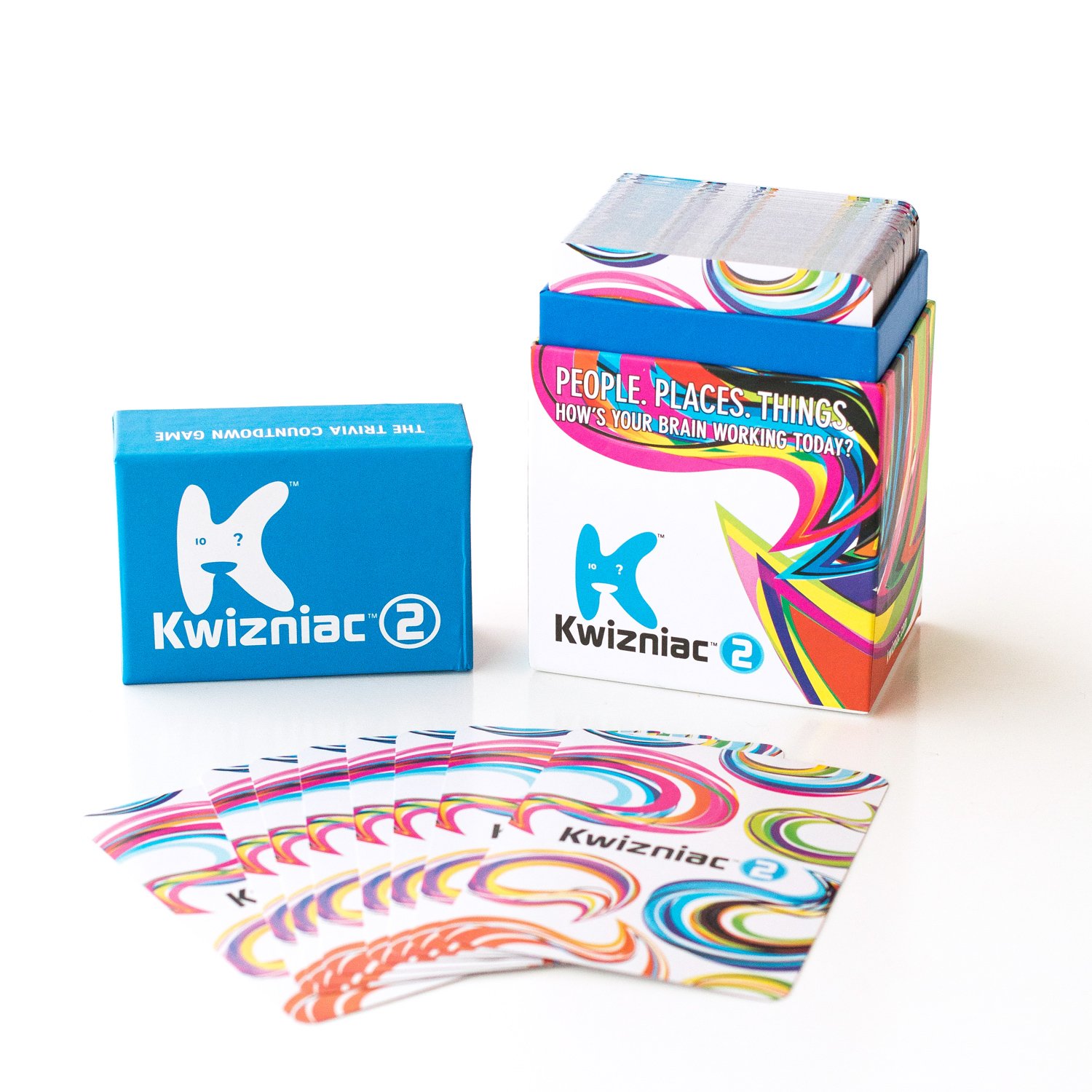 Kwizniac is an excellent travel game for the car, train, and even the plane! It offers a great way to exercise critical thinking skills while trying to guess the answer with the least number of clues as possible.

200 cards are conveniently packed in a box that is easy to carry with you no matter where you go. Each card is printed with ten clues, the first being the hardest and getting easier as you go. The goal is to try and guess the answer with the least number of clues so that you can rack up more points. The person with the most points at the end of the game wins.

Although the game is intended for the older family members, ages 12 and older, it is appropriate for all ages and can be a great team building exercise when the younger kids team up with the older ones. This game is sure to be a hit and is a must-have in your travel bag! 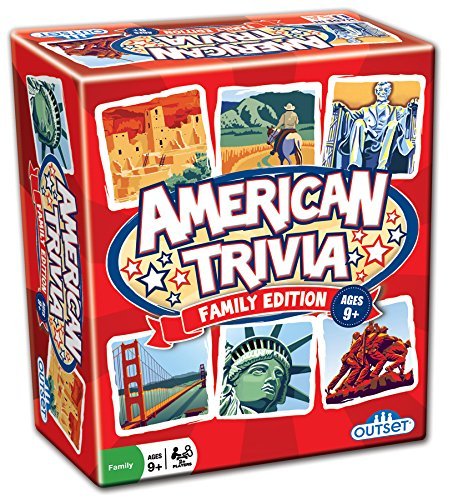 This trivia game is the same fun game as the other American Trivia games except you don’t have the need for a board. It’s designed for travel and only comes with a spinner and 360 trivia cards so that you can conveniently pack it into your travel bag.

For ages 9 and older with two to eight players, the 2500 questions make it possible to learn and have fun at the same time. Each card provides two sides with one side being harder than the other, so no matter who plays, everyone will have a chance to answer the question right.

This is definitely a game that should be included in your bag of activities for your next road trip. The best part is that you can also play this game from the hotel room without the added mess!

4. Brain Quest for the Car

There’s nothing better than a game in a book when it comes to travel and that’s just what you will get with this Brain Quest game for the car. These curriculum-based questions are packed into a paperback book and is intended for your family members as young as 7.

There are 1100 questions about America including the answers and games too are all nestled in between the covers of the book. There is even a list of the American states and capitals in the back of the book! There is enough here to keep everyone happy and no one will get bored.

Be sure and grab this book before you head out on that long trip in the car or even on the plane. You can even play this game while camping and at parties! 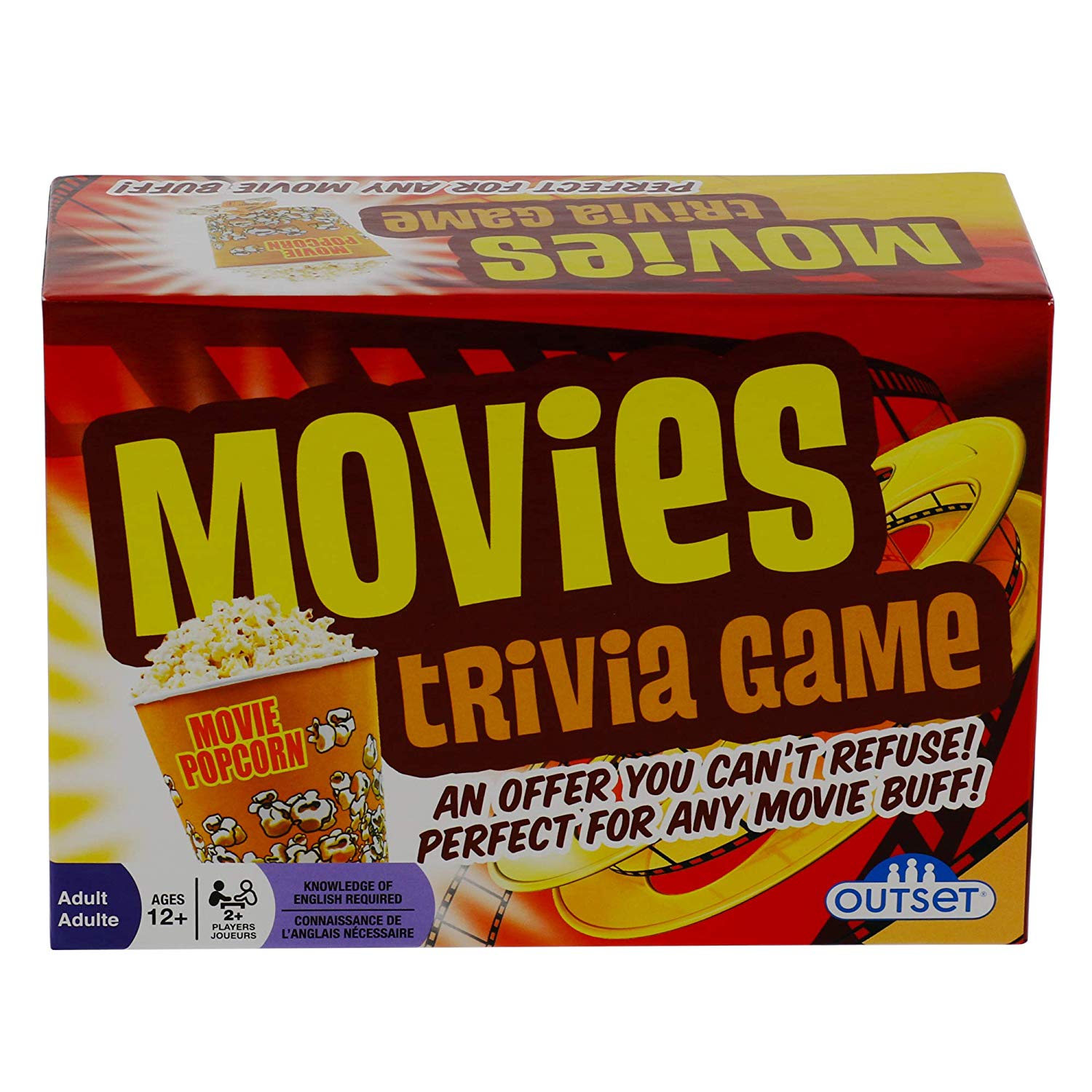 Let’s face it, everyone likes a good movie, so why not enjoy a fun game of movie trivia on your next car ride with the family?

Stuffed in a convenient storage box you will find 1200 fun trivia cards containing five different categories so that everyone in the family will find a genre they will like. Although the game was created for kids who are 12 years and older, there is sure to be something the younger kids will know too.

With nothing more to carry than the cards, it’s a no brainer why this game is perfect for travel when you have a family filled with movie buffs!

1.  If you wanted to ride on the Big Thunder Mountain Railroad, where would you go?

2.  In what two US states is Busch Gardens located?

3.  Where is the Bob Hope Airport located?

4.  Where was Daniel Radcliffe born?

5.  Which US state has only one syllable in its name?

6.  Which 5 US states border Georgia?

7.  If you wanted to travel by car to Chattanooga, Tennessee from Atlanta, Georgia, how long would it take you to get there?

8.  In which country does a kangaroo live?

9.  In what US state is the Walmart headquarters located?

10.  Where was Coca-Cola invented?

11.  If you wanted to see Big Ben, the famous clock, where would you need to go?

12.  Where was Christopher Columbus born?

13.  If you wanted to see a live performance on Broadway, where would you need to go?

14.  In what US state was Steve Harvey born?

18.  What is the name of the famous falls in New York?

19. In what state is Walt Disney World located?

20.  How many Great Lakes are in North America?

21.  In what city would you find The Simpsons?

22.  In what city and state will you find the Pro Football Hall of Fame?

23. Which ocean will you find off the coast of California?

24.  Which ocean will you find off the coast of South Carolina?

25.  In what state will you find The Statue of Liberty?

26.  What country was the first to use paper money?

28.  What is the smallest country in the world?

29.  Where is the Eiffel Tower located?

30.  Where is the Berlin Wall located?

31.  If a person is from Brazil, what language would they be speaking?

32.  What is the world’s largest land animal?

33.  What extinct creature was alive millions of years ago?

35.  In what country will you find the Great Barrier Reef?

36.  What is the capital of Thailand?

38.  What was the name of the first man to walk on the moon?

39.  Where was Thomas Edison born?

40.  What did the Wright Brothers invent?

41.  What is the smallest ocean in the world?

42.  Where is the world’s tallest rollercoaster located?

43.  What is the currency in Germany?

44.  Where is the Golden Gate Bridge located?

46.  Where is the White House located?

49.  How many tires are on a tractor trailer?

50.  Where was the world’s first Ferris wheel located?

51.  Where is the largest outdoor waterpark in America located?

53.  Where is the longest boardwalk in the world located?

54.  Where is the Mall of America located?

55.  Which US state has the most fast-food restaurants?

56.  Which airport is the largest in the US?

57.  What is the largest Disney Hotel in Florida based on occupancy?

59.  What is the name of the world’s largest cruise ship?

60.  Where is the Baseball Hall of Fame located?

61.  What is the largest hotel chain in the world?

62.  Which amusement park in the United States has the largest yearly visitor count?

63.  What is the biggest grocery store company in the world?

64.  What is the largest freshwater lake in the world?

65.  Which planet is the seventh from the sun?

66.  There is only one state in the US that starts with the letter “P”, which one is it?

69.  What is the biggest island in the United States?

Answer: The Big Island of Hawaii

70.  How many states are in the United States?

71.  What is the capital of the United States?

72.  Which state in the US is known as the Empire State?

73.  Which state in the US is known as the Volunteer State?

74.  Which state in the US is known as the Constitution State?

75.  Where is the Bermuda Triangle located?

Answer: In the western part of the North Atlantic Ocean

76.  In what year did Hurricane Katrina hit the Gulf Coast of the United States?

77.  How many counties are in the state of South Carolina?

78.  How many counties are in the state of Wyoming?

79.  How many countries are there in the world?

80.  Which country has a flag that is nicknamed “stars and stripes?”

81.  Which four countries will you find in the UK?

82.  Where does the President of the United States Live?

Answer: In the White House

83.  What is America’s National Game?

84.  In the United States, Christmas is celebrated on what day?

85.  In what country will you find Dubai?

86.  Where does the Queen of England live?

87.  What is the coldest state in America?

88.  In which country was Hitler the ruler?

89.  In which country was paper invented?

90.  The United States Armed Forces are made up of what 5 branches of the military?

91.  If you wanted to visit the largest aquarium in the United States, which state would you go to?

93.  Where is Harvard University located?

94.  If you wanted to ride a roller coaster at Cedar Point, which state would you need to visit?

95.  In what 3 US states is the Yellowstone National Park located?

96.  In what US state was Forrest Gump born?

97.  How many US states border the Gulf of Mexico?

98.  What continent did sushi originally come from?

100. In what US city and state was basketball founded?

101. How many stripes are on the Spanish flag?

Now that you have this list of 101 fun car ride trivia questions and games, you should have no problem keeping the kids busy on your next trip!