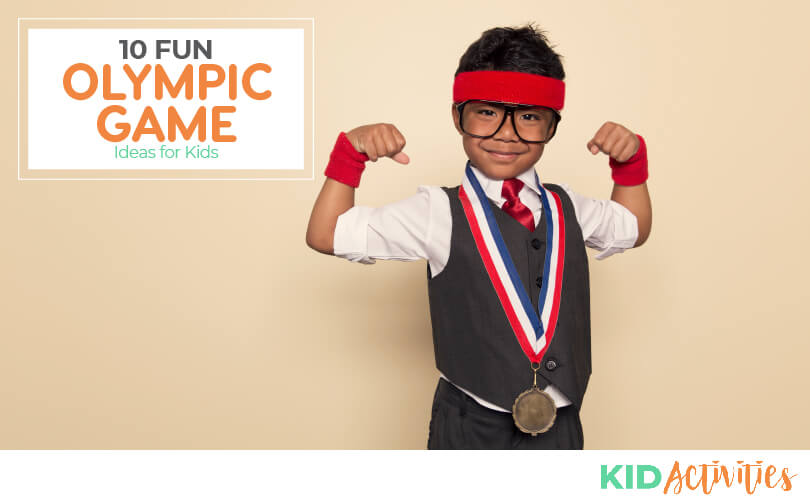 Want to get kids excited about the Olympics? There may be no better way than to have them participate in their own Olympic games.

These fun Olympic game ideas are designed to do just that. Games of competition and cooperation will get them in the Olympic spirit.

Make sure you stock up on supplies for your Olympic games:

Before games, have kids say the Olympic oath!

Every four years the world celebrates as the athletes take an oath.
In the name of all competitors, I promise that we shall take part in these Olympic Games, respecting and abiding by the rules that govern them, in the true spirit of sportsmanship, for the glory of sport and the honor of our teams.

Have your kids put up their right hand and say an oath/promise at the beginning of your games.

A simplified version for the kids to say before their events is:

“I promise to follow the rules of the games.
To be fair.
To be a good sport, and honor my teams!
I’ll remember to play for fun!

1. Set up a colored ring toss

2. Have a Hula-Hoop contest

Can you play any of the games mentioned above such as:

Another great idea could be to play an Olympic themed game of charades for kids. The kids could act out the different sports and the other kids would have to guess what sport it is.

Check out the great ideas in the Races, relays, balloons & beanbag. All great games for an Olympics type theme! There are more than 45 games in that Category!

Also, look at ideas in the Outdoor water play Category. Towards the page bottom is a description of a water-themed field day!

This is a good time to gather the children with their Olympic flags and medals and make a group picture or individual pictures before and at the closing ceremony after the games.

Make sure someone has a camera and video camera during the events!

We hope you have enjoyed this fun list of Olympic game ideas. How did your event go? Did the kids enjoy the competition? If you want some more Olympic ideas make sure you check out our Olympic themed crafts.