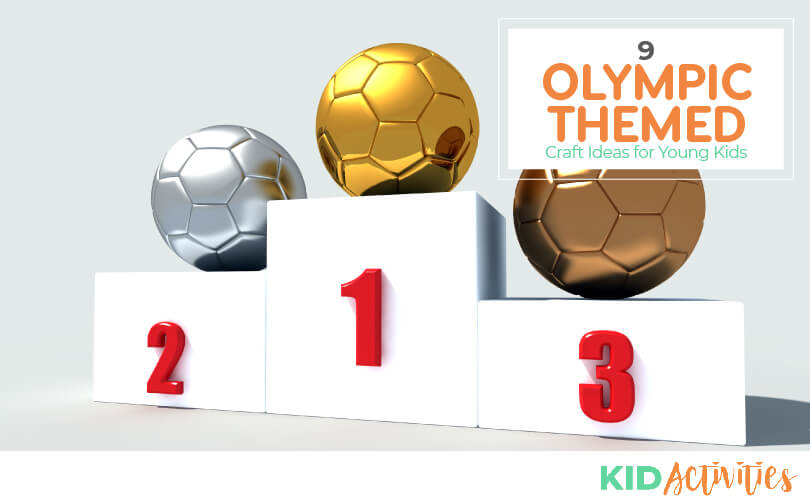 Are the Olympic games approaching? It’s always a fun event that brings out country pride and spirit. These Olympic themed craft ideas are a great way to get young kids involved and learning about the Olympics.

Use these craft ideas to develop an Olympic theme day. In addition to crafts, you can play some Olympic themed games and host your own Olympics, giving young kids the opportunity to win their own medal.

These fun craft ideas can also be used to help decorate your space for your Olympic event.

Make an Olympic flag (or flags) to have at your events or decorate your room.

Explain to the children:
1. The five rings (circles) are interlocking on a white background.
The white background symbolizes peace.
The colors of red, blue, green, yellow, and black, were chosen because each nation has at least one of these colors in its national flag.

Make flags of the countries represented at the Olympics.

Decorate the room with the flags. You can also put up a world map with the continents of Africa, Australia, Europe, The Americas, and Asia

The torch part can also be made from paper towel roll tubes and covered in tin-foil.

FYI:
The first Olympic games were held in 776 BC. The olive tree played a crucial role in this event. The Olympic winners were awarded with a crown woven from olive branches. The first was a burning olive branch.

Possibilities are endless) With the children make a list of the qualities a mascot should have.

Since the first mascot in Olympic history made its appearance at the 1972 Munich Olympic Games, Olympic Mascots have become a main element of the Olympic image. As a unique and popular image full of vitality, a mascot is able to materialize the Olympic spirit, communicate the concepts of each Olympic Games, promote the history and culture of the host city and create a festive atmosphere for the Games. Mascots act as a significant vehicle for communicating the Olympic spirit to the general public, especially children and youth. Whatever shapes they have, they fundamentally share a creative rationale, that is, the mascots must be able to convey the theme of the Olympic Games, showcase the distinctive geographical features, history, and culture unique to the host city.

We hope you have enjoyed these Olympic themed craft ideas for young kids. How did it go? Did you get some creative results? Creating country flags is a project that can keep your little ones occupied for some time. Make sure you check out our Olympic themed game ideas.