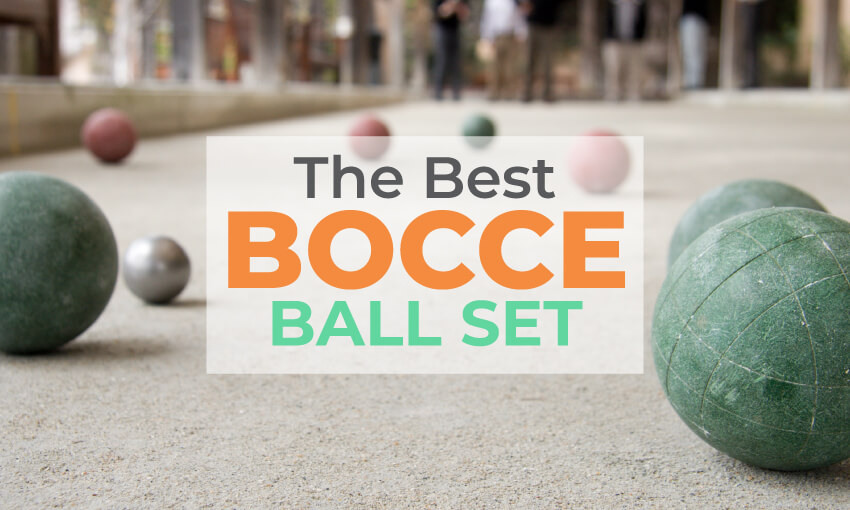 5 of the Best Bocce Ball Sets

Looking for the best bocce ball set? Look no further. Bocce is a fun and exhilarating game that can be enjoyed by people of all ages.  It is a particularly exciting activity for family events like BBQs and parties as anyone can join in.  The rules are simple and kids will have a great time challenging their parents and grandparents to a game.

Of course, to play bocce at home, you will need a set of bocce balls.  This bocce ball set buyer’s guide will help by sharing some tips for choosing the right bocce balls.  We’ll also showcase several excellent bocce ball sets that are well-made and durable.  Let’s check them out.

What is bocce ball?

Bocce (sometimes called bocci or boccie) is one of the world’s oldest lawn games.  Archaeologists have found evidence of people playing games that resemble bocce as far as 7,000 years ago.  Back then, players would use objects like coconuts, pieces of wood, and melons instead of the balls that we use today.  The rules of the game are simple.  All you need to get started is:

The game is started with a toin coss.  The winner of the toss will choose a player to throw the pallino on the court.  Ideally, the pallino should land in the centre of the court, at least 30 yards from the end of the court.

Players then throw or roll their bocce balls in an attempt to get as  close to the pallino as possible.  Opposing teams will often throw their bocce forcefully to knock their opponent’s bocce balls out of the way.

The game is scored once all bocce balls have been thrown.  This is the end of the round.  A team earns one point for each ball that they have closer to the pallino than any ball from the opposing team.  If a bocce ball is touching the pallino, it earns the team two points.  If both teams have a ball equidistance from the pallino, no one scores a point for those balls.

Rounds continue until one team reaches a set point total.  If you are playing backyard games with friends or family, making the winner the first team to reach 12 points works well.  If there are lots of players waiting for a game, you can reduce this number by a few points.

Although the rules of the game are simple, it is highly addictive and a lot of fun.  The perfect game to play after a BBQ or lunch.

What is a bocce ball set?

A standard bocce ball set contains 8 colored bocce balls and a smaller white pallino.   Typically, the colors used for the bocce balls are red and green, but some sets will use additional colors including yellow and blue.  Each bocce ball will have markings on it, which can be used to determine who has thrown the ball in a game of doubles.

Bocce ball sets tend to come with other accessories like a carry bag and a measuring tape.  Having a carry bag makes it simple to store or transport your bocce ball set.  It also helps you keep all of the balls in one location and reduces the risk of losing one.  Some bocce ball sets will use a timber box instead of a bag.  While this can add a fair amount of weight to your bocce balls, it increases how well they are protected.

The cost of a bocce ball set can vary greatly.  Cheap sets start around the $30 mark, Standard bocce sets will run you at least $20, but if you’re going to buy a professional set, you could need more than $100.

Here are a few simple tips to help you buy the right bocce ball set.

Are the bocce balls regulation size?

The International Federation for Bocce and the United States Bocce Federation say that bocce balls must be 107mm for men.  Women can also use a smaller 106mm ball, which can be easier to hold in smaller hands.  Bocce balls that are 112mm, 115mm or larger are not regulation size, despite the fact that they are often advertised as “expert” or “competition” balls.  Full-sized bocce balls will weigh somewhere around the 2 pound mark (920 grams to be precise).

If you are a bocce ball enthusiast intending to play competitively, you should look for bocce ball sets that match these specifications.  This will ensure you are playing bocce ball as it is meant to be played.  However, if you play with your family, you may prefer to use smaller or lighter balls (see below).

Who will be playing?

Bocce ball can be enjoyed by people of all ages.  However, some young children and adults with small hands can struggle to hold full size bocce balls (107mm).  For this reason, many people choose bocce ball sets that are below regulation size.

Many bocce ball sets have balls that are 100mm, 95mm, or 90mm in size.  These smaller balls also tend to be lighter.  This makes them much easier for young children to hold and throw accurately.  There is also less risk of a child dropping a bocce ball and injuring themselves.

How competitive is the game?

If your friends and family have become very serious about bocce, you might be better off investing in a professional level bocce ball set.  It might be more expensive initially, but it will pay off in the long run as you, your family, and your friends enjoy years of bocce ball.

The balls in a professional bocce ball set are very durable and less likely to crack, so you won’t have a situation where one ball from the set becomes easily damaged.  They will also feel better in the hand and be more stable when they roll.  Players will be able to use their skill to accurately throw the ball.

Another consideration to make before buying a bocce ball set is its price.  Beginners sets start around the $25 mark, intermediate sets are about $50 and professional sets can go above $100.  When considering your budget, think about how many years you might use your bocce set.  If you plan to make bocce a weekly activity that you enjoy most weekends, spending a little extra might be a good idea.

What are the balls made from?

The main difference between a cheap bocce ball set and a good one is the materials used to make the balls.  Professional bocce balls will be made from thermoset resins or metal.  These materials are heavy but they are extremely durable.  They also produce a ball that rolls straight, allowing skillful players to make very accurate shots.

What accessories come with the bocce ball set?

At a minimum, a bocce ball set should include 8 colored bocce balls and a white pallino.  Most will also come with a carrying case.  The case can be made from different materials including canvas, leather, and timber.  Timber cases provide additional protection, but they are heavier and more difficult to transport.

Some cases will include padded or timber inserts to stop the balls hitting each other while being carried — but that is not always the case.  Take a closer look at the carrying case to assess its quality.  Bocce ball sets may also come with a measuring tape.  This can be very handy if the game is close and there are two bocce balls very close together.  Learn more about bocce ball accessories.

Here are 5 bocce ball sets that are well-made, affordable, and guaranteed to provide you with many years of fun.

This premium bocce ball set from GoSports contains eight 100mm (3.94”) bocce balls and a 45mm white pallino ball.  This size is slightly smaller than official regulation size, but it is much easier for children to play with.

The balls are designed in the traditional bocce colors of red and green.  The high-quality poly-resin finish is glossy and very attractive to look at.  It is also extremely durable and unlikely to crack or chip.  The square and circular markings on the balls make it easy to tell which player owns a specific ball.

The bocce balls weight 2 pounds 5 ounces each, which gives them a very solid feel.  However, being on the heavier side means very young children may struggle to throw them well.

This bocce ball set comes with an attractive canvas carry bag that contains internal dividers.  This carry bag is very useful if you like to play bocce while traveling or visiting with friends.  This is an excellent bocce ball set for enthusiasts and casual players alike. 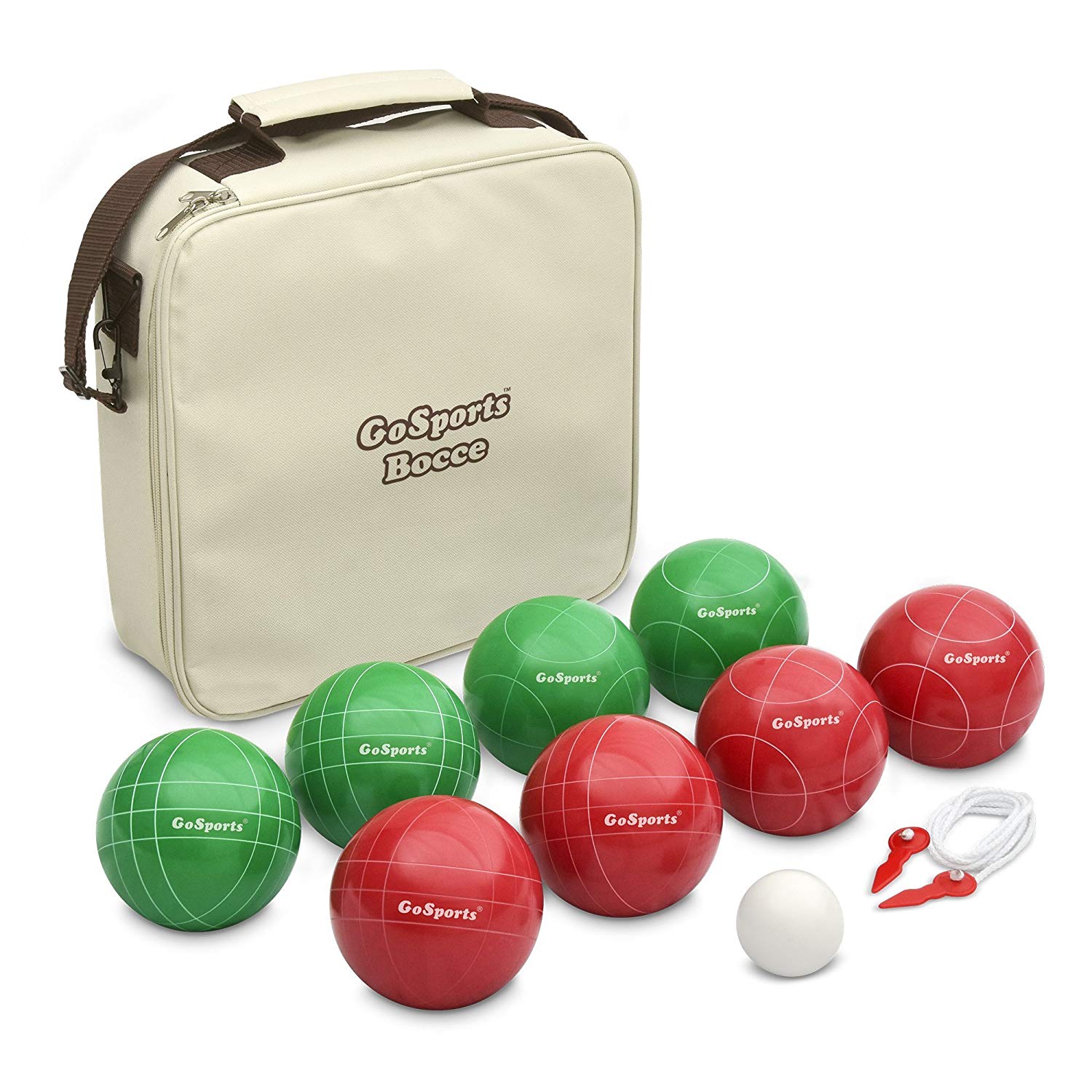 This is another great bocce ball set from GoSports.  This set is designed for family use, with smaller, 90mm (3.54”) balls that weigh 1lb 11oz each.  These balls are much easier for children to handle, which helps them enjoy the game and do well.  There is also less risk of injury with these lighter balls should a child drop one on their foot by accident.

The eight balls in this set are painted in four colors — blue, green, red, and yellow.  This makes it much simpler for the children to track which player owns which ball.  Despite being smaller and lighter, they also feel great in the hands of an adult and roll well.  This bocce ball set also includes a canvas bocce bag and measuring tape. 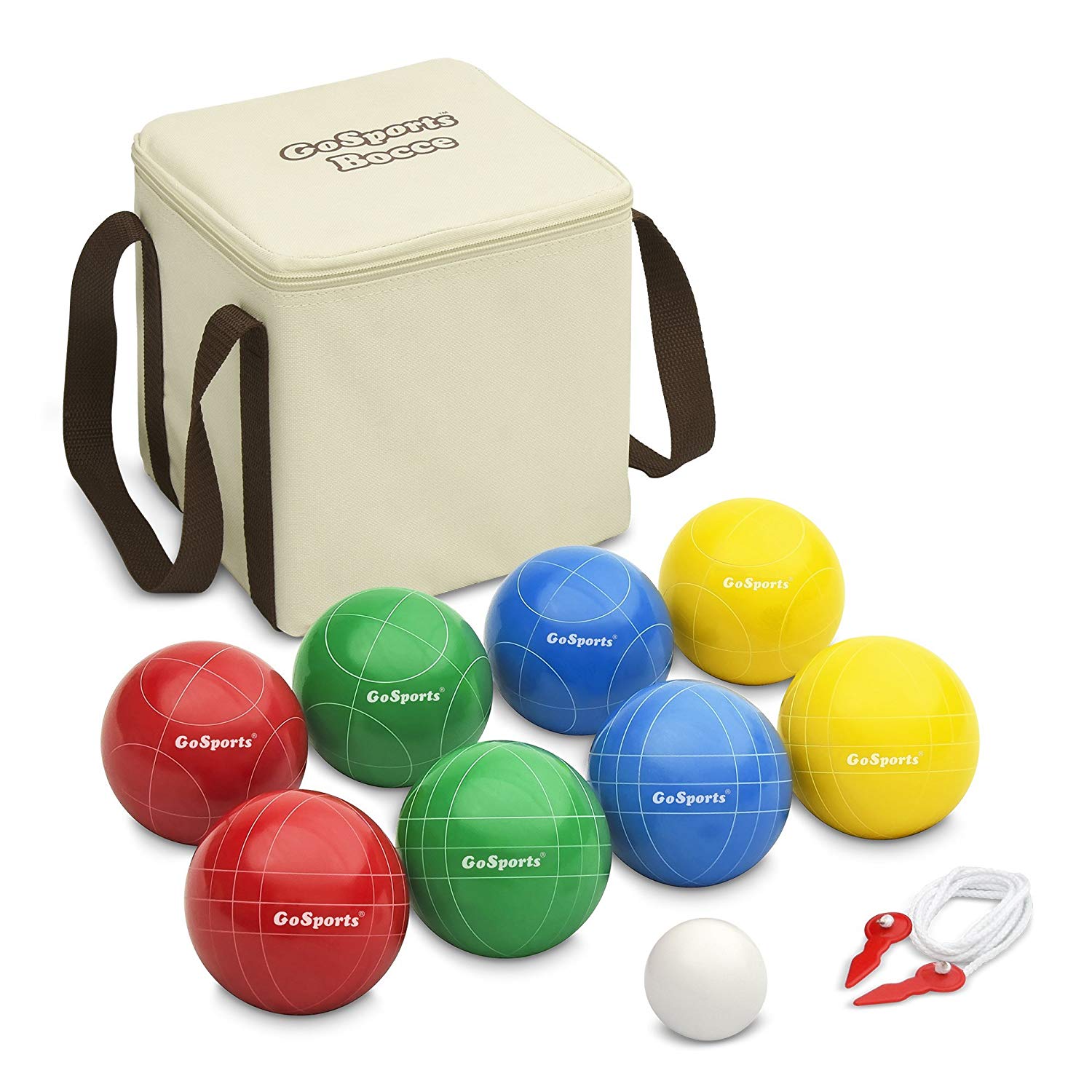 This is a very high-quality bocce ball set designed to meet official bocce ball regulations.  Made in Italy, this set contains contains eight red and green bocce balls measuring 107mm in size, plus a 50mm white pallino.  They come in a stylish bocce ball bag with handles for easy transport.

This set is made by Perfetta, who have been the official supplier to the world bocce ball championships for the past 20 years.  The quality of the balls is obvious upon first handling them.  The balance of each ball is perfect and they roll straight every time.  You can really notice the difference between these Italian balls and cheaper Chinese products.  This bocce ball set is covered by a 10 year warranty. 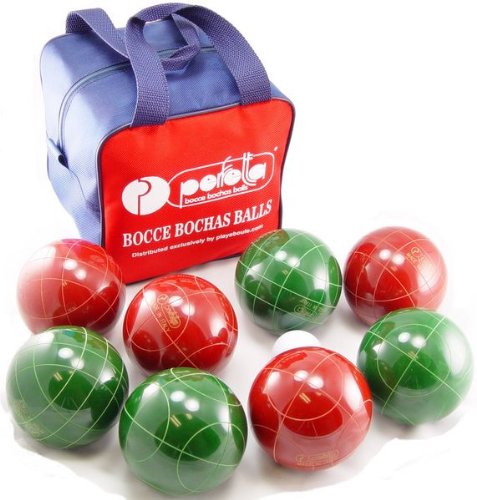 Anyone who has played bocce ball knows how addictive it can be.  Players often spend hours competing against one another and many matches only conclude when it becomes too dark outside to play anymore.

This lighted bocce ball set will let you continue playing even after the sun has set!  Each ball contains a built in switch that turns on an internal light.  This light can either be set to be continuously on or to flash every now and then.

The balls in this set are regulation size at 107mm (4.2”).  They are also designed to be waterproof, sand proof, and grit proof, which will keep the electronic components functioning for years to come.  This set also includes a bight blue carry case, and 50mm pallino. 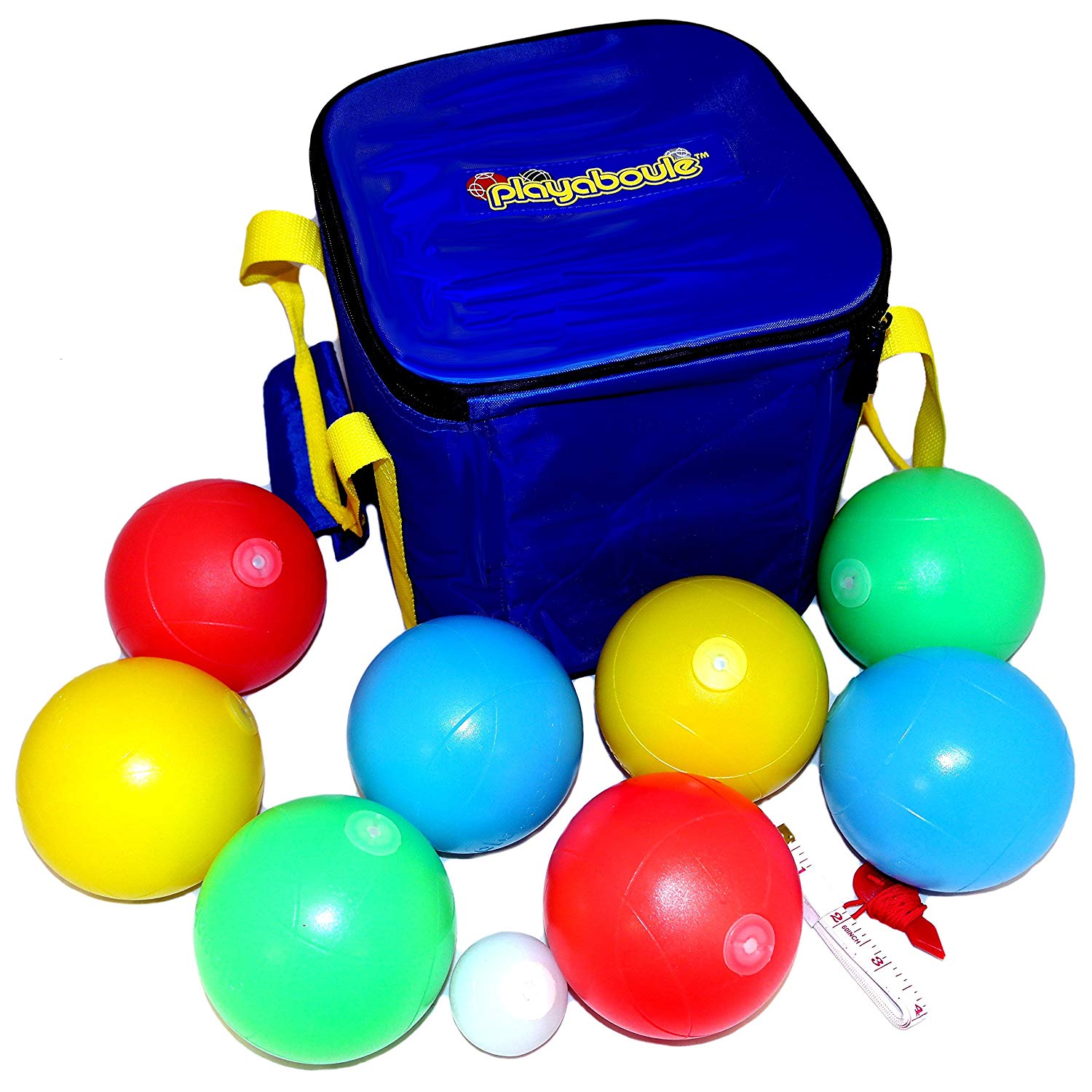 This premium bocce ball set is made according to the official bocce ball standards.  Each ball is 107mm in size and weighs 2 pounds.  The balls are extremely durable thanks to a thick poly-resin shell.  This material is very resistant to cracking and chipping.  This set comes with a measuring tape and 90-day warranty.  The carry case is one of the best we reviewed, because it includes thick foam dividers to prevent the balls from hitting one another while in transit. 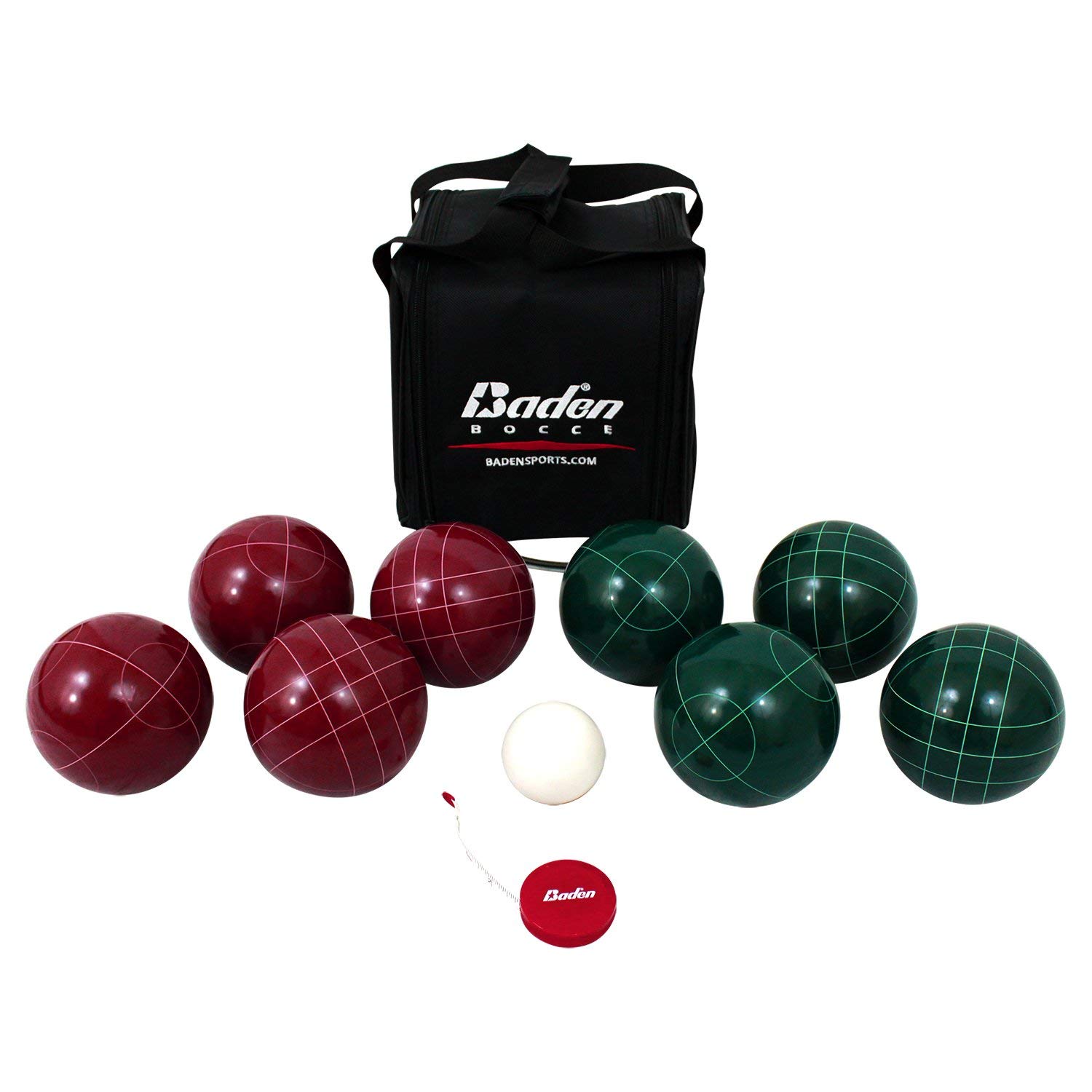 Thanks for reading Best Bocce Ball Set!  If you have any questions about bocce ball sets, please leave a comment below. Check out some of our best trivia board games and icebreaker games.