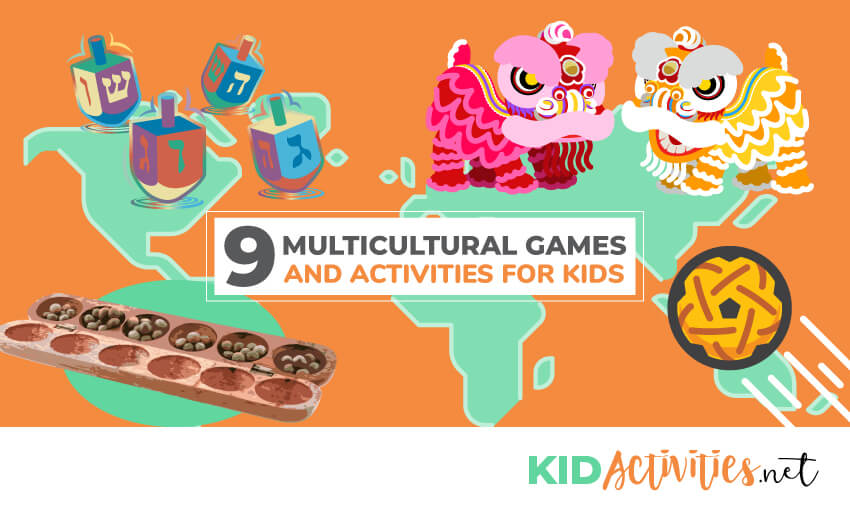 Looking for multicultural activities for your kids or your students? This list of diversity games and curriculum ideas will make teaching children about different cultures fun!  Whether you’re looking for puzzle games or PE activities, in this post you will find some of the best ideas to help your children spark their sense of adventure. Read on for activities to help children learn more about activities from around the world.

If you’re looking for multicultural books or language lessons, we have ideas for you too!

Takraw is similar to the U.S. game hackysack. A takraw is a ball about the size of a grapefruit made from woven rattan, and it’s quite hard.

Players stand in a circle and pass the ball around, using their heads, feet, legs, and shoulders. They can’t use their hands.

Takraw games often break out on the street among strangers waiting for a boat or a bus. This multicultural game might draw 40 or 50 people before the boat or bus arrives to take away some of the players.

Takraw is very entertaining to watch. Check out one tournament in the video below:

Invite members of the community from other countries to talk about and demonstrate the games they played as youth. Or, acting as coaches, have 9-14 year olds organize and put on a multicultural game tournament for younger children.

Read on for some additional multicultural night activity ideas. 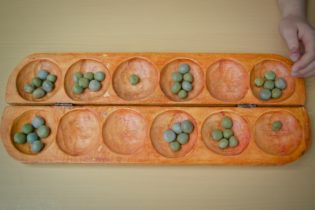 Mancala is a multicultural game that has been around for centuries. Forms of this game were played in ancient Africa and Asia. There are many different names, boards and rules of play for Mancala, but most are played on wooden boards with beads, stones or glass game pieces. Children in Africa would play by scooping holes in the dirt to create a game board.

Want to learn how to make your own Mancala board? Use a Styrofoam egg carton, two applesauce cups, pudding cups, or similar containers, and dried beans. Of course, you can use anything for game pieces, beads, pennies, or anything small and easy to scoop! You will need 48 game pieces to start the game – 4 in each cup. 2 people play at a time. Expand your children’s creativity by crafting their own Mancala board as a fun DIY project.

Place the board between the two players so that the long sides face the players- and the two small containers (Mancala cups) are on the right and left. You will have six cups of beans facing each player. Place 4 beans in each cup. Each player has a Mancala cup, which is the applesauce cup on their left. This cup is where they put the beans they collect.

Object of the game:

Each player takes a turn and tries to collect as many beans as possible in their Mancala cup before the other player clears their side of the board.

On each player’s turn, he or she picks up all of the beans from one cup on their side of the board- Then – going clockwise- they place one bean at a time in each cup- including their Mancala (collection cup) until they run out of beans. The game ends when one player has no more beans left in the cups on their side of the board. The player with the most beans in their Mancala cup wins!

5 or more players, ages 5 and up, can play this multicultural game outdoors in the winter.

Players prepare the course for the game, consisting of a maze of parts in the snow over a field or ice. The parts should be wide enough for one person to run on, about one meter wide.What follows is a simple game of tag played in lanes in the snow. Players must stay on the paths, but the person who is it may jump from path to path in pursuit of his opponents.

This imaginative modification of tag in the winter could lead players to inventing their own unique games for the winter season. The Scottish people did just that when they invented curling from the summer game of bowls.

Many are available in the Chinese New Year category of this site.

After much discussion about the cultures represented within their classrooms, 3rd through 5th graders in Minnesota grew curious about their neighborhood. What cultural groups were represented in the households and local businesses? How did the community affect, and how was it affected by, these groups? What makes a neighborhood?

Armed with notebooks and pens, homemade cameras (made in science class), and tape recorders, the students walked around the neighborhood on several different days. They enhanced their observations with research and interviews, reading about the history of migration to the area, sampling levels of pollution to determine how that affects the community, and talking with experts from prominent local businesses. The students, especially the English Language Learners, greatly increased their language proficiency through daily journaling.

Excited by the wealth of information they had learned, children wanted to share their knowledge with the greater community. They produced large-scale drawings of their observations and mounted this artwork in their classroom, creating a neighborhood cultural museum. People from all over the city responded to the posters the students made advertising the temporary museum and attended the grand opening celebration.

Through their many walks, youth discovered the richness of their neighborhood’s past and present. Through their design of a cultural museum, this diversity activity became a part of that community legacy.

School is an introduction to the greater world in so many ways, including how to bridge age and cultural differences. One group of 7th and 8th graders in Washington collaborated with 1st graders in an ongoing, multi-faceted project to do just that.

Following a comprehensive training on communication, tutoring, and group work, the 7th and 8th graders began to work extensively with 1st graders in their district.

The older students studied a variety of world cultures, then designed and facilitated presentations and activities for the younger students during such observations as Asian New Years, Cinco de Mayo, and Earth Day.

For their part, the 1st graders learned numbers and basic greetings in several languages and taught these to the older students. Both groups also participated in longer term efforts such as peer tutoring.

As they progressed through their project, all the students involved worked to develop and maintain a resource file. They stored copies of their research, activity plans, and contacts from which community members could draw.

When one teacher in Washington introduced a diversity and culture curriculum to her 4th-grade students, she discovered few knew much about their heritages. They decided to investigate their cultural backgrounds further, and asked residents of local nursing homes and senior centers to help them. The senior citizens were glad to have regular visitors and people to share their stories with.

The students began by studying their region’s past and present cultural groups, including their own. They learned how to effectively use electronic encyclopedias and online sources to conduct research.

After reviewing communication strategies, such as active listening and speaking clearly, each student partnered with a senior citizen of the same culture. Many of the youths did not have regular contact with the elderly or strong mentors in their cultural communities. Through these partnerships, the students received positive role models and learned how to gather information from primary sources. Each pair discussed its heritage and created an art or craft project typical of that culture.

After classroom discussions, independent research of secondary sources, and conversations with senior citizens, each student wrote a report on the culture of his or her choice, including pictures of the country’s topography, flag, and peoples. The student led their classmates in listing beneficial contributions that people from that culture made to the United States. To conclude the project, they decorated their room with their reports and the art projects; served homemade food; and invited the senior citizens, parents, and other classes to join them in celebrating diversity at the multicultural fair.

These 4th graders learned a lot during this project, from how to research using a variety of sources to appreciation for their elders. Most importantly, they grew in understanding of their own heritages and realized with pride that they too were community resources and cultural representatives.

A question was posted online, asking educators how they encourage the celebration of diversity in their programs and classrooms.

If you’re looking for more multicultural games and activities for your classroom, we have plenty more ideas throughout the website! Try these arts and crafts projects, or bring your appetite to your multicultural experience with these food ideas. Make diversity and cultural games for kids a yearlong tradition in your community.