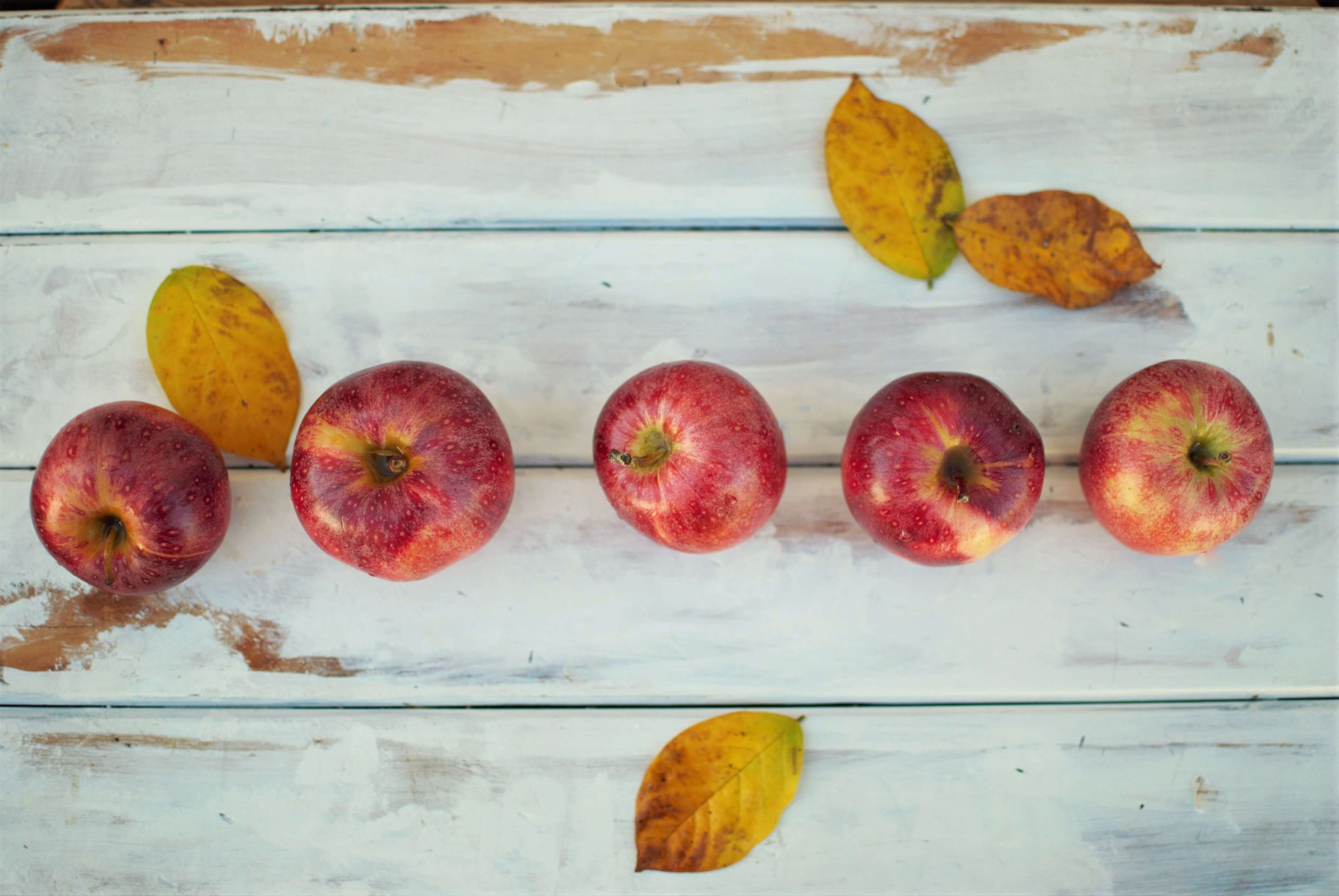 If you’re looking for something fun to do with the kids, look no further. We have everything you need in this list of 73 fun apple crafts and apple themed activities for kids. If you’re looking for some apple themed art for preschool-aged kids or maybe some apple crafts for preschool, we can help you with that. When the kids are cooped up indoors on a rainy day you can choose some of the apple themed games we have on the list. We will even help you spruce up your classroom for the holidays with some apple bulletin board ideas, and if you want to teach the kids about popular apple varieties, we have that too. No matter if it’s Halloween, Thanksgiving, or Christmas, apples are a great way to entertain and decorate. Of course, when the fun is over, the best part is enjoying a delicious apple snack.

How to Create Wreath:

Tip: To make a shrunken apple for a witch’s head you would most likely carve a large nose, two deep holes for the eye sockets and a sneering hole for the mouth. Keep the shapes that you carve simple and larger than you think you need them to be since they will shrink as they dry.

Cut an apple for each child to glue a photo of themselves on and put on the bulletin board.

Draw a large basket with apples in it and write each child’s name on an apple.

Apples on a tree with each child’s name on an apple.

May this school year bring

And may you enjoy it

Right to the core!

Post the above poem and then draw a huge apple core with everyone’s names on it.

Place children’s photos or names in apples and hang on the tree.

Tip: Make a whole collection of apple pictures this way. You can also use fabric paint and make an apple print T-shirt, towels, etc.

Tip: You can also use cooked noodles for worms.

Paint a still life of apples by putting together a bowl of apples, or apples on a table. Put out the paints and paper and see how creative the kids can be.

Add the cinnamon to the applesauce until you get a clay-like consistency. You may add glue for added thickness. Once the dough is mixed, create shapes with your hands or roll the dough out and use cookie cutters. Let the dough dry. Store unused dough in a bowl with plastic wrap as a cover.

Mix until the consistency of cookie dough. (Add more water if needed.) Sprinkle cinnamon on the cutting board and knead the dough. Roll out 1/4-inch thick. Cut into shapes using cookie cutters or Popsicle sticks. Punch a hole in the top with a straw or pencil before drying (so you can string ribbon through later for hanging). Bake in 350° oven for 30 minutes or until firm. Let them cool, and then decorate! These are usually used as ornaments—–but make necklaces from them.

Mix the applesauce and the cinnamon until it gets to a nice clay consistency. If it’s too sticky, add a bit more cinnamon or even a touch of flour. You can make shapes and designs or use cookie cutters. Put the shapes in a warm, dry spot to dry, this takes a few days. You now have sweet-smelling sculptures to decorate and/or paint.

Use red, yellow, and green colored play dough, adding cinnamon spice to it. Lay out the apple cookie cutters and tools. Kids may want to make their own version of an apple (or other things) Add a pipe cleaner for a worm.

On go, the first player on each team runs up to the pile and takes an apple. The players come back to the group doing what it says on the apple. When the first players get back the next players run to the apples and play continues

Return the apples to the bottom of the pile until all have had a turn.

29. Half an Apple Match Game (Use this game to find partners or to just have fun!)

Much like Bobbing for Apples except trying to get the apple while it is hanging from a line!

Cooking something with apples? Kids will like the challenge and the bonus of their efforts…a yummy apple something!

36. Apple Relay (you need one apple for each team)

If some of the children cannot do this, they could always lie down on the floor and wiggle forward any way they can. Play some music to go with the movement!!

39. Apple in the Mouth Race

You will need a bushel basket and five apples you can substitute red bean bags or small red balls. 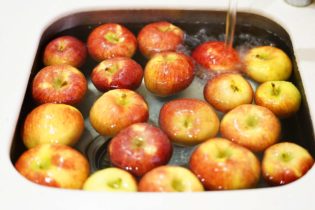 The players must try and get an apple out of the bin by biting into it. He may not bite the stem and he may not use his hands in any way. Also, smaller apples work better for younger children.

42. Worm Through the Apple

Provide 1 balloon per player that is not inflated.

Good if you only have a few kids.

Tip: Prior to starting the game–be sure to explain the meaning of ‘hot and cold’.

Play this game like “Hot Potato” using an apple!

49. Have a Relay Race Using Apples and Brooms

Push apples along with a broom

50. Have an apple relay race

Compete by pushing an apple to the finish line with your nose.

53. Guess the Number of Seeds in an Apple

Tally up the results and make a total at the bottom of each column. You can get the colored sticker labels from the stationery store for the children to use to put on the chart. If they like a red apple, they place their red circle sticker under the red, yellow circle sticker under the yellow apple, etc. They enjoy doing this because they get to use stickers—but they also get to taste a variety of apples!

57. Apples: Different Colors and all the Same Inside 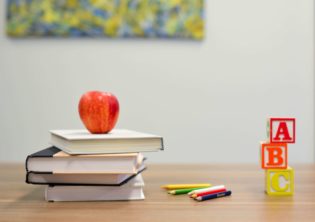 Some of it can be written on the computer and some of it can be handwritten, with lots of child comments and artwork. Ask Teachers and Parents to share their favorite Apple goodies.

60. Read or tell the story of Johnny Apple Seed

Not only can they read or tell this story, but they can also act it out as a group.

61. Write a Book About Apples

After the kids write their story, have them shape the book into an apple. They can share some of their artwork in this book with drawings of apple trees, an apple with a worm, etc.

Then, I turn white.

Later, I fall to the ground

I take nectar from a blossom.

I take pollen from one blossom to another.

I am yellow and black.

I have a top and a bottom.

I have apples, cinnamon, and nutmeg inside.

I stick to a honeybee’s legs.

The honeybee takes me from one flower to another.

(Sung to the tune of “Have You Ever Seen A Lassie?”)

Have you ever had an apple and heard it go “crunch”?

Have you ever had an orange and heard it go “slurp”?

Have you ever had a banana and heard it go “mush”?

Four red apples on the tree,

Two for you and two for me.

So-o shake that tree and watch them fall.

One, two, three, four and that is all.

(Sung to the tune of “Itsy Bitsy Spider”)

Once a little apple seed was planted in the ground.

Down came the soft rain, falling all around.

Out came the big sun as bright as bright could be.

And that little apple seed grew up to be an apple tree.

(Sing to the tune of “The Muffin Man”)

Oh, do you know the Apple Man,

Oh, do you know the Apple Man

Who likes to play with me?

Oh, he has a great big smile,

Oh, he has a great big smile

And likes to play with me.

Oh, he has a bright red face,

Oh, he has a bright red face

And likes to play with me.

Oh, he has a star inside,

Oh, he has a star inside

And he likes to play with me.

(Sung to the tune of “Twinkle, Twinkle, Little Star”)

On the tree or on the ground.

Apple pie and juice and bread!

Apples are so good to eat!

up high in a tree.

I looked up at it,

and it looked down at me.

And what do you suppose?

Fell down right on my nose

(Group) Then who took the apple from the apple tree?

The child then passes the apple to the next child and play continues until all have had a turn.

After everyone has had a turn, have an apple snack and read a favorite apple story.

We peeled the apples

and sliced them small,

cooked them in water

then mashed them all.

We added some sugar

and cinnamon to taste,

back in the cook pot

We’ll spread it on bread

the apple butter we made

with love and great care. 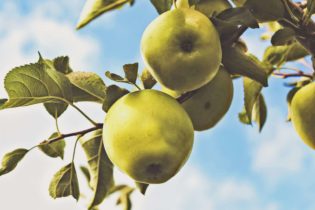 Need some help in picking out the perfect apple for eating, baking or a recipe? Sometimes it can be confusing when deciding which apples to take home from the produce aisle or farm stand!  The following information comes from The Apple Journal

Now that you have all these fun apple crafts and apple themed activities for the kids, you should be on your way to making some great apple-themed art projects and with the apple varieties list, your kids should be able to recognize any apple they stumble across. With the apple bulletin board ideas we’ve provided, you should win the prize for this year’s contest. So, go ahead and sing some apple themed songs and play some apple themed games. When the day is over, you and the kids can enjoy a tasty apple treat!