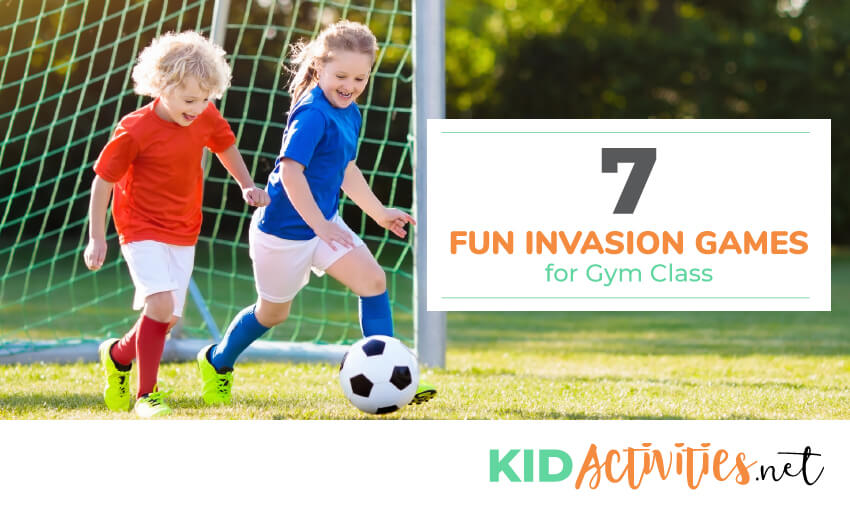 If you’re like most PE teachers you’re probably always looking for fun games to play in the gym. Games that keep the kids interested, especially when they’re in elementary school might be more difficult than when they’re older. That’s why we thought you might want to try at least 1 of the following 7 fun invasion games for gym class.

Most of these games can be modified to fit the age groups of your students. They are all easy and fun to play, and we assure you that your students will be begging to play these games again in the future.

This game is a combination of three games in one; basketball, soccer, and team handball and it might be a better choice for middle to high school aged children.

The game begins when the ball is freely thrown onto the middle of the playing field. When the ball is on the ground it becomes a soccer ball and can only be kicked up to the teammates. If a ball is caught, it then becomes a handball and is treated as such, either by throwing it to another player or tossing it into the basketball hoop thus treating it as though it is a basketball.

Just like in basketball, there are four quarters in Speedball and each team is allowed three timeouts per game.

This game variation is best for elementary aged children and should be played in a large area. It can be played with either a large or small group of students.

When a ball is stopped on the ground it becomes a free territory and may be stolen from any other player, but only one team at a time should be rolling the ball to knock down a pin. Once a team’s pin has been knocked down, everyone on that team should do a task such as a certain number of jumping jack’s before standing the pin and getting back into the game.

There is no scoring in this game, but when the time is up, the kids can all move to another place on the field and the time can be set once again for another round. This game is great for exercise and perfect practice for eye-hand coordination as well.

This game is played much like kickball or baseball and can be enjoyed by kids of all ages and grades.

One team leads off as the kicking team while the other will play outfield. The first kicker will kick the ball and run to the first mat before getting tagged with the ball. Once the player is safe on the mat the next kicker will kick the ball and run for the mat. There is no rule that says the players must run from the mat each time the ball is kicked; therefore, it doesn’t matter how many people occupy the mat at one time, but points will only be scored when players run home safely.

Scoring is the same as in kickball or baseball, but it can be modified for the age groups who are participating. You can choose to play a certain amount of innings or just set a time limit.

Get more games that involve kicking.

This game not only has many names, but it also has many variations. We are going to introduce you to one of the easier game variations so that it can be played by younger children in the elementary grades.

One team will be the sharks and the other team will be the minnows. The sharks will be the attackers, so they will stand in the two middle rows of the playing field. All the minnows will then stand at one end of the playing field. The sharks will only be allowed to move from side to side on their lines. One minnow will start to run across the field trying to avoid being tagged by a shark. If the runner makes it to the end zone without getting tagged he or she will be considered safe, but if the runner gets tagged, then he or she will fall into the line and become a shark.

Play continues with one runner at a time until everyone has had a turn. The safe runners will be the winners. The teams should trade places so that everyone has a chance to run. There are no official points in this game, but it is a lot of fun and exercise. The students will also be learning about following rules and coordination.

This game can be altered for your age group, but this variation will work best with elementary aged students.

The object is to work as a team and get as many balls into the empty basket on the other side of the field as possible.

One team can serve the ball like in volleyball or the coach can throw out the first ball, it will depend on the age group of the students playing. The team members will then throw the ball to each other until they get the ball in the empty basket at the opposite end of the field.

When a player is holding the ball, they cannot walk or run but only pivot on one foot to find another player to throw it to. If a player drops the ball they should hurry and pick it up because a member from the other team can then steal it giving the opposite team an opportunity to score.

The team who gets the ball in the basket should then toss out another ball from the full bin. Once the balls have all been used, the game is over.

The team who gets the most balls in the basket wins the game.

This is a fun team game like soccer that can be played with students from grades 2 through 8.

Each team should split up and stand behind their designated bench. The coach will then start the play by throwing out the ball and calling out a number. Each team member with the corresponding number should enter the playing field. It will then be the team members job to kick the ball to the goal (the bench) to score a point for their team. The losing teams should complete a task such as hopping on one foot before the game begins again.

The play will continue until the time is up or the designated number of points have been met. The coach can also choose to call out more than one team number at a time for larger groups.

This game sounds like dodgeball and can be enjoyed by everyone at any grade level.

Played much like dodgeball, several balls are flying across the field at the same time. The team members try to avoid getting hit with the ball while trying to hit members of the opposite team at the same time. If a player gets hit, he or she must go to jail on the opposite teams’ side which is the designated area in the end zones. The only way out of jail is to catch a ball that lands in jail and hit a player on the opposite team with it. A player can only throw a ball at another player from the waist down, anything above will be an illegal hit and the player who throws it will automatically get sent to jail.

There is no scoring in this game, but it can be timed, or you can play until everyone has been to jail at least once.

There you have it, 7 fun invasion games for gym class. Need more ideas? Learn how to play Gaga Ball. We also have plenty of other fun gym games and activities.