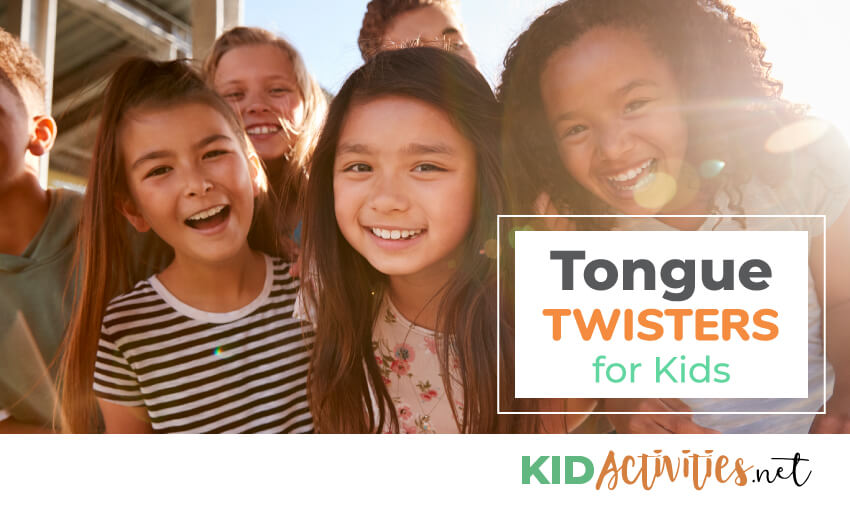 This list of tongue twisters for kids makes for great literacy activities and line practice. Short tongue Twisters are not only for linguistic fun and games; they serve a practical purpose in practicing pronunciation.

The most memorable tongue twisters generally involve some kind of story or description. The following have been circulating for many years:

This is one of those tough S tongue twisters for kids.

Swan swam over the sea,

If Peter Piper picked a peck of pickled peppers,

and Sam Shott was not.

So it is better to be Shott

Either the shot Shott shot at Nott

then Shott was shot,

A tree toad loved a she-toad

Who lived up in a tree.

He was a two-toed tree toad

But a three-toed toad was she.

For the two-toed tree toad loved the ground

That the three-toed tree toad trod.

But the two-toed tree toad tried in vain.

He couldn’t please her whim.

From her tree toad bower

With her three-toed power

And Mr. Soar owned a seesaw.

Which made Soar sore.

See’s saw would not have sawed

But it was sad to see Soar so sore

She ceased shining shoes and socks,

for shoes and socks shock Susan.

If one doctor doctors another doctor, does the doctor

doctor he is doctoring doctors? Or does he doctor

the doctor the way the doctor who doctors doctors?

To talk ere the tot could totter,

Be taught to say aught, or naught,

Or what ought to be taught her?

If to hoot and to toot a Hottentot tot

Be taught by her Hottentot tutor,

Ought the tutor get hot

If the Hottentot tot

Hoot and toot at her Hottentot tutor?

These sheep shouldn’t sleep in a shack;

sheep should sleep in a shed.

10. No Need to Light a Night-Light

You’ve no need to light a night-light

For a night-light’s light’s a slight light,

And tonight’s a night that’s light.

It is really not quite right

To light night-lights with their slight lights

Betty Botter bought some butter, but she said “This butter’s bitter!

But a bit of better butter will but make my batter better.”

and it made her batter better so ’twas better Betty

She sells sea shells by the seashore.

The shells she sells are surely seashells.

So if she sells shells on the seashore,

I’m sure she sells seashore shells.

“How much wood would a woodchuck chuck

if a woodchuck could chuck wood?

He would chuck, he would, as much as he could,

and chuck as much wood as a woodchuck would

if a woodchuck could chuck wood.”

for nobody’s toeses are posies of roses,

as Moses supposes his toeses to be.

All I want is a proper cup of coffee,

Made in a proper copper coffee pot.

You can believe it or not,

But I just want a cup of coffee,

In a proper coffee pot!

Are of no use to me!

If I can’t have a proper cup of coffee

In a proper copper coffee pot,

If two witches were watching two watches which witch would watch which watch?

The following is from Doreen Zmijski of Mi. and Florida

PROBLEM BARB… “I did the tongue twisters with the kids. We laughed so hard, nobody could do it… I wish all days were like this. EVERYBODY TRY IT! ACT SILLY… IT’S A RIOT! “

18. Kitten in the kitchen

Kitty caught the kitten in the kitchen.

Whether the weather is warm,

Whether the weather is hot,

We have to put up with the weather,

We all scream for ice cream.

Fuzzy Wuzzy was a bear.

Fuzzy Wuzzy had no hair.

Fuzzy Wuzzy wasn’t fuzzy, was he?

I thought a thought.

I wouldn’t have thought so much.

What noise annoys an oyster?

The noise that annoys an oyster

Is a noise that knows no oyster.

27. If you notice this notice

If you notice this notice,

You will notice that this notice is not worth noticing.

How many berries could a bare berry carry,

If a bare berry could carry berries?

Well, they can’t carry berries (which could make you very wary)

But a bare berry carried is more scary!

29. Susie works in a shoeshine shop

Susie works in a shoeshine shop.

Where she shines, she sits,

And where she sits, she shines.

At least Denise could sneeze

And feed and freeze the fleas.

Spread it thick, say it quick!

Spread it thicker, say it quicker!

Don’t eat until you are spreading it like a spread!

A happy hippo hopped and hiccupped.

A sailor went to sea

To see, what he could see.

And all he could see

I slit the sheet, the sheet I slit, and on the slitted sheet I sit.

A skunk sat on a stump and thunk the stump stunk,

but the stump thunk the skunk stunk.

There was a fisherman named Fisher who fished for some fish in a fissure.

‘Til a fish with a grin pulled the fisherman in.

Fun Tongue Twister Activities for the Kids in the Classroom

The following games are fun and the twisters themselves are great to use for Drama Club exercises and as an activity for waiting in line! Try some with your kids…

What can you do with tongue twister beside say them???

Get twisted without getting tongue-tied.

***IDEA: Try to say the tongue twisters with tongues stuck under the lower lip, or stuck out!!!

2. Take Turns Saying Each of These 3 Times

This activity is a variation of the famous ‘Consequences’ game. Write the following questions on a board or chart paper:

Now give kids the following instructions:

1. Get into teams of about 5 people

2. On a piece of blank paper write your answer to question #1.

3. Pass the paper to the person on your right.

4. Write an answer to question #2 on the paper you have just received. Your answer must begin with the first sound in the person’s name (Example: Bob – bought a bike)

5. Pass the paper on again and write an answer to question 3 again using the sound at the beginning of the name.

6. Continue until all the questions have been answered.

Pass the paper back to the person who started with it. Read all of the tongue twisters aloud.

It might help if you give the kids some examples before they begin the exercise:

Check out our Christmas tongue twisters as well.