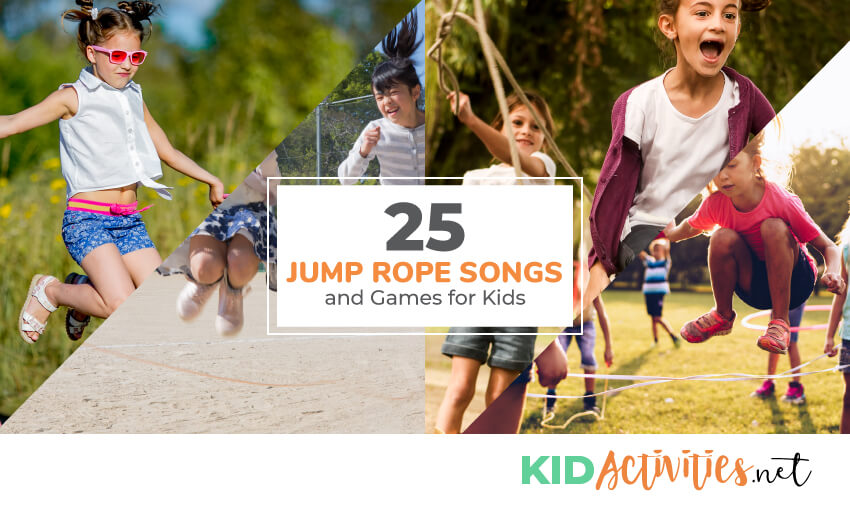 You need some good jump rope songs and games, we have them. Here you will find an extensive list of jump rope rhymes and activities that are sure to bring hours of fun and laughter.

Jumping rope is still a favorite on most playgrounds. Whether alone or in a group, jumping rope challenges both coordination and stamina. It’s also a unique part of our cultural heritage. Historically it was first a game primarily for boys. Males usually did not use rhymes. Instead they spent their time on trick jumps: crossovers, double jumping, and peppers.

Migration of Americans from farms to towns and cities led to girls taking over this unique pastime of jump roping. One theory for this is that girls now had more time to play than they had back on the farm, and more friends to play with. On smooth city streets they put together dozens of games and hundreds of rhymes that make up modern jump rope lore. 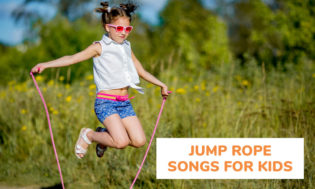 Pepsi cola shot him down
Dr. Pepper fixed him up and
changed him into Bubble up!

3. DOWN BY THE RIVER, down by the sea

,
Johnny broke a bottle and blamed it on me.
I told ma, ma told pa,
Johnny got a spanking so ha ha ha.
How many spankings did Johnny get?
1, 2, 3…. (Keep counting until the jumper messes up).

,
who’s your boyfriend/girlfriend I forgot?
A,B,C,D,E,F,G,H (and so on until the person stops jumping) You take the letter he/she lands on and think of a name of someone you know that begins with the letter.

Cinderella went upstairs to kiss a ‘fella –made a mistake and kissed a snake–how many doctors did it take? (count until someone messes up)

Cinderella, dressed in yella
went downtown to meet a fella
on the way her girdle busted,
How many people were disgusted?
10, 20, 30, 40, 50…
Until someone misses.

I LIKE COFFEE, I like tea, I like (name of next person in line) to jump in with me.” Then the two jump together, the second person saying the rhyme. When the rhyme is done, the first person runs out, and the new person comes in and jumps with the second person. OR…

“Peel a banana upside down; see if you can touch the ground.” (the jumper tries to touch the ground without being tripped by the rope),” If you spell your name correct, you will get another chance . . .” The jumper then spells her name, including saying “capital” for uppercase letters of her name. If the jumper trips or messes up the spelling, it’s another jumper’s turn.

13. DOWN IN THE VALLEY where the green grass grows,

There sat (jumper) pretty as a rose.
Up came (a boy in the class, particularly one the jumper likes) and kissed her on the cheek,
How many kisses did she get this week? Count until jumper misses.

Or, add to the end the following lines:
He jumped so high, high, high
He touched the sky, sky, sky
And he never came back, back, back

15. A HORSE, A FLEA AND THREE BLIND MICE

sat on a curbstone shooting dice.
The horse, he slipped and fell on the flea.
The flea said “Whoops, there’s a horse on me.”

Keep track of who has what score- then see who has the highest count.

Participants jump in the rope one at a time. They jump the number of times depending on what grade they are in. All participants start at Kindergarten followed by grades 1, 2, 3 …

For Kindergarten they run through the rope without jumping, first grade they jump once, and so on… If they miss as they are jumping, they have to start over at Kindergarten.

Decide how many will jump in! Participants jump in one at a time until everyone is in the rope.

As they enter the rope, repeat
“ALL, ALL , ALL …” until the last person is in the rope.
Say the chant and then the participants will exit on their birthday month.
“ALL, ALL, ALL, ALL …”
“All in together, any kind of weather
I see a teacher looking out the window
Ding, dong a fire bell
January, February, March …”

(Act out the different things as you’re jumping rope)

I’m a little Dutch girl dressed in blue,
Here are the things I like to do:

Salute to the captain (salute)
Bow to the queen  (bow)
Turn my back on the submarine (turn around and face the other direction)
I can do the tap dance (dance)
I can do the splits (jump up high with legs apart)
I can do the hokey pokey (turn yourself around)
Just like this! 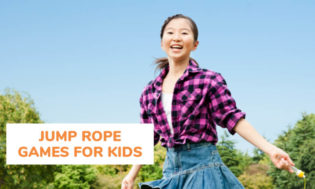 Starting at age 4, children can begin to learn. Start by having them jump over a stationary rope on the ground— or an adult or another child can wiggle the rope and they can hop over the wiggling snake!
Move on to swinging the rope back and forth slowly while they learn to jump over it; then once they get the hang of things, move on to swinging it overhead. If you don’t have another adult or older child to help you swing the rope, you can hold one end of the rope and tie the other to a fence, chair, or play-scape.

21. Consider having a JUMP-ROPE MARATHON (DAY OR WEEK…)

Will Use: Jump ropes, plastic cups, and water

Need one jump rope per Team…Divide group into several small groups. The first player of each group runs to their jump rope-which is placed  about 30 feet in front of each group. They then do five jumps and return to the group. The first group/team to finish is the winner.

Extension Play…Jump backwards-five times; Jump five times on your left leg (or right leg); Jump rope and say the multiplication table of fives. Do this until you get to fifty–say one number each time you jump.

TO YOUR GROUP! START A CLUB OR TEAM!
GRADES 4th-6th AND HIGHER!

Young people do this for fitness and it is competed at world level. Double Dutch competitions are categorized as compulsory, free style and speed rope.

There is no way any kids will think that jumping rope is for younger children once they realize the skill and sportmanship needed! Click on other group videos while there!

This isn’t jumping rope-but something you can do with jump ropes!

SNAKES (OR WORMS) on a parachute…
Place four to six skipping ropes on the chute. By shaking the chute, the children try to shake them off. SeeParchute games for other game ideas…

There you have it a list of 25 jump rope songs and jump rope games. Make sure you check out our list of fun outdoor summer activities as well.