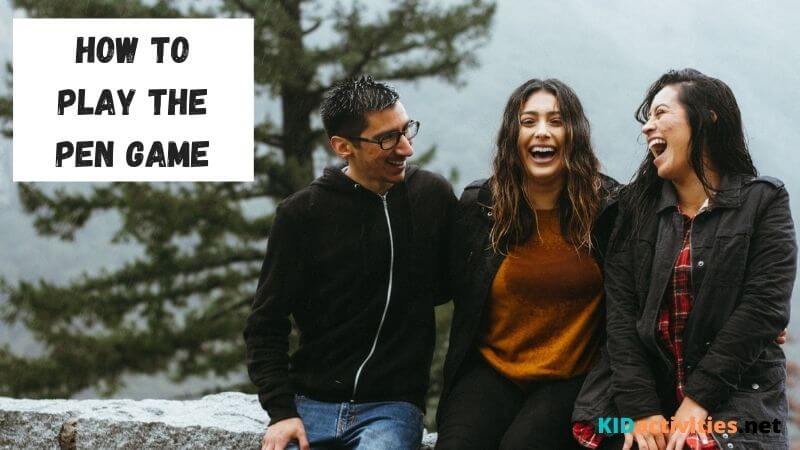 How to play the pen game? The Pen Game is such an easy game you can play with anyone, anywhere. This article will explain how to play it, and what are the rules.

If you are looking for fun and easy games to play with your kids, you have just come across the right place.

Keeping kids entertained is not always an easy task. Luckily, there are plenty of fun games that require little to no accessories to bring on the laughs. And the Pen Game is one of them.

The Pen Game – A brief introduction to games with concealed rules

The Pen Game is a game with ‘concealed rules’.  In this type of games, rules are intentionally kept secret from players. Discovering the rules is an important part of the game itself, adding excitement to the gameplay and giving birth to hilarious situations.

If you are not familiar with this type of games, here is a list of the most famous games with concealed rules: Calvinball, Dragon Poker, Double Fanucci, Mao, Eleusis, Bartok, Bang Bang Who’s Dead, etc. And, of course, the Pen Game!

How to Play the Pen Game

The Pen Game is a little more than a game. We wouldn’t be too wrong if we said it is actually a prank. The Pen Game is all about uttering two sentences and doing a lot of pointing around using a pen.

Let’s take a look at the game’s mechanics.

Figuring out what he/she did wrong is what makes the Pen Game so much fun…and takes frustration to a whole new level. The goal of the game is to have all players figure out the trick on their own.

What do you need to play the Pen Game?

As the very name of the game suggests, all you need is a pen and a little bit of creativity. And, of course, at least one playing companion willing to accept the challenge and get pranked.

What’s interesting and fun about this game is that players do not actually know the rules. Well, THE RULE would be more correct.

Let’s say, it’s like a puzzle that each participant needs to solve without revealing the trick to the other participants. The Pen Game has one single rule: say the word ‘okay’ when you repeat the two sentences.

Can the sentences be changed?

Yes, you can change the sentences. But you have to maintain the mechanics and have a rule that needs to be discovered to keep playing.

Where can you play the Pen Game?

Since it requires no particular setting, the Pen Game can be played anywhere: while traveling, at parties, at home, in the classroom, etc. If you don’t have a pen at hand, you can point with the finger or use any other object.

Can the Pen Game be used for educational purposes?

The Pen Game went viral on social media during the last year or so. From that moment on, people have come up with many variants and tried to add even more fun to the original game.

Some teachers have discovered the Pen Game’s potential for educational purposes.

The Pen Game has been adapted for classroom use to show kids how making rules and laws without consulting other people can give birth to injustice and unfairness.

The adapted Pen Game is an excellent warm-up activity for a debate on human rights and it can be used as a starting point for setting up classroom rules that respect everybody’s rights.

This is how to play the adapted Pen Game in the classroom:

Make students sit in a circle. Make sure to let them know in advance that the rules of the game won’t be unveiled.

You can use this adapted version with your kids to make them understand the importance of setting fair rules and respecting them.

You can use the discussion to work together on a set of home rules that everyone will have to respect.

We wouldn’t be wrong to conclude that the purpose of the Pen Game is to discover the ONLY rule that keeps you in the game and allows you to challenge the next player.

Of course, the puzzled and frustrated look on your co-players’ faces and their hilarious attempts to guess the rule are priceless!

However, this viral game is more complex than you may have thought initially. Creative teachers took the opportunity and adapted the Pen Game to teach their students a valuable lesson: the right to equality and the value of human rights.