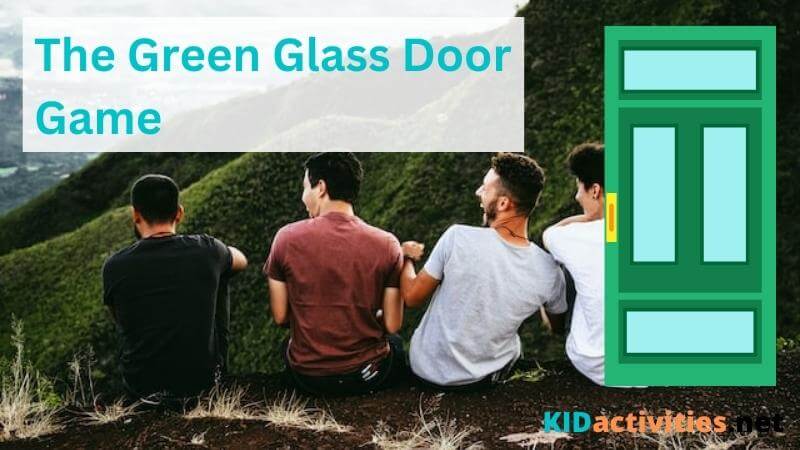 The Green Glass Door Game for your class or party is a popular social game to make kids and adults engaged and in conversation.

The game is meant to play with at least three people to make sense. In a nutshell, the players are required to guess what they can bring with them through the green door.

This post will teach you the Green Glass Door game rules, and provide you with cool and fun variations to make the game more interesting.

To start the game, the teacher or host needs to announce they are starting the Green Glass Door game, the host then tells the group that he is going to take something through a Green Glass Door and everyone else who are playing needs to do the same.

The object of the game is to try and figure out what can be brought through the Green Glass Door.

1. Start the game by saying ” I can bring a doggy through the Green Glass Door but I can’t bring a dog. “

2. The key rule in this game is that the object you bring through the door must have double letters, they need to repeat themselves in the full word.

3. When the next player goes and tries to guess, if he does not say an object with two double letters, you need to reply with ” You can’t take that through the Green Glass Door, you must _____ “

The outcome here depends if you play this game in a class, or at a party event, some good variations could be:

In the class:
Being eliminated from the game

In a party:
Must do a funny face or trick as ” punishment “

4. If at any time a player thinks he knows the pattern to the game, you can as the game leader or host ask him to give an example instead of just letting him guess so other players can continue the play.

5, If the entire group figures out the pattern, the game is over.

Now that we understood the rules of the Green Glass Door game, let’s look at a few cool variations that can add more levels to the game.

To add some flare to the game, or just to make it more challenging, the host can decide on extra variations to add to the guesses, below are a few cool examples:

While the Green Glass Door is a very popular game around the world, you be surprised that many people especially on the younger side have never played it before.

There for explaining to them the rules and maybe using some of the variations we suggested here will make them fans in no time.

Spoilers – If you don’t want to ruin the game for someone, don’t read past this

You figure it out? There are double letters in each of the words in the title of the game. If that’s not a big giveaway, I don’t know what is.

Now that we all know how to play and figured out the pattern of the game, let’s look at some objects and words that can pass through the door:

2. Apples – but not bananas

3. Overalls – but not black pants

4. Happy person – but not a mad person

5. Mushrooms – but not a fungus

8. Grasshopper – but not a bug

You get the idea here.

When most people play the green glass door game they tend to focus on the relationship between the two objects that are being mentioned, and not on the letters and words individually.

For example, when someone who knows how to play the game says he brings a doggy but not a cat through the door, most people will think that animals or pets are the connection, and follow this thought process.

Which is obviously wrong.

If you want to really confuse the other players who didn’t figure it out yet, here are some good examples that will make them think about relation, and not spelling:

These will for sure confuse your players and make the game last longer, which is a fun thing to do as we don’t want it to be over too quickly.

Cool get to know you games