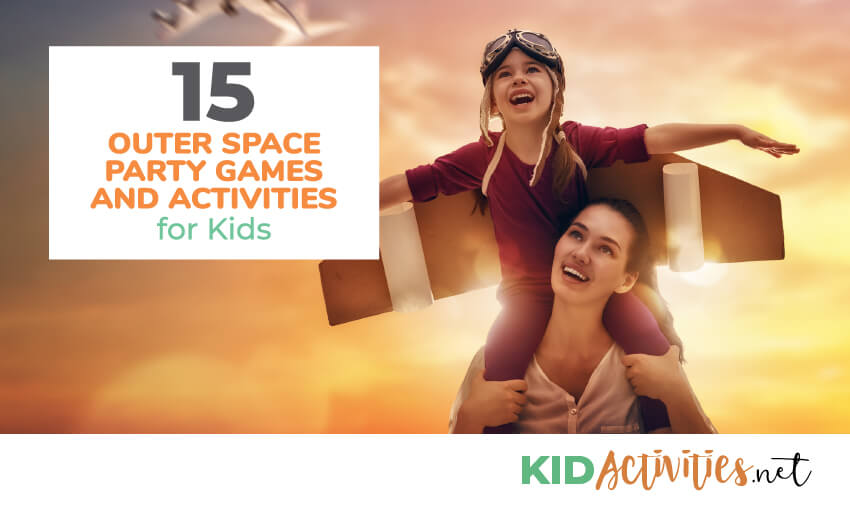 So, your little one is asking for an outer space themed birthday party, but you don’t know where to start in the planning. No worries, we’ve got you covered. Check out this list of 15 outer space party games and activities for kids. Start with an arts and crafts table and work your way through to the games. We have things that can be created by the kids to be used as decorations and things they can create and play. From start to finish, you will have no problems coming up with something to keep the kids busy throughout the entire party. 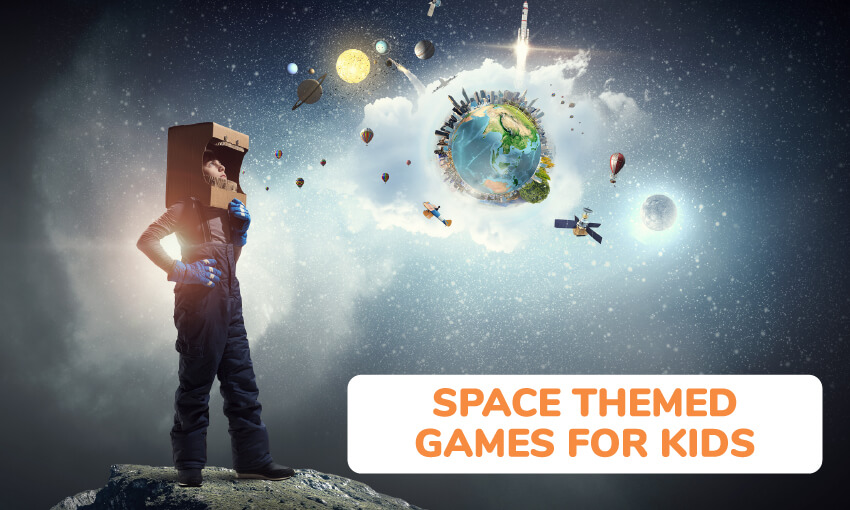 The creator of this game copied from Musical Chairs because this one is played in almost the same way.

Place the balls inside the Hula-Hoop. When the music starts the players must walk around the Hula-Hoop. When the music stops the players should all grab a ball. The player who doesn’t get a ball is out. Before the next round, you should remove one of the balls from the hoop so there is always one less ball than the number of players. Continue to play until one person is left standing. The last player standing is the winner of the game.

If you’ve ever played Hot Potato you will surely see the similarities with this fun game of Hot Moon.

All the players should stand and form a circle. One player is chosen to start the game by passing the ball. While the music plays the players should quickly pass the ball around the circle because when the music stops, the person caught holding the ball is out of the game. Play continues until one person is left standing. That person wins the title of Hot Moon Champion.

Separate the cotton balls by placing 20 in one bowl and 20 in the other bowl. Divide the players into two teams and place one empty bowl and one bowl with the 20 cotton balls in front of the first player on each team. Blindfold the two players and give them each a spoon. Set a timer to 30-seconds and when the timer starts, they will compete to see who can get the most cotton balls into the empty bowl. It’s not as easy as it sounds though because they will only be allowed to use the one spoon they were given. They cannot use their hands for assistance. This will be tricky since the cotton balls are lightweight and they won’t be able to feel them on the spoon. When the time is up, they can remove their blindfolds and count the cotton balls they transferred into the empty bowl. The player who gets the most balls in the bowl wins that round. Play continues until all the players have completed the task.

To prepare this game you will need to spray the box with the paint. When the paint is dry, use the string or rope to tie the box from a tree limb or other type of object. Be sure you hang the box so that the opening is on the side. Line the players up and allow each player to take a turn throwing the frisbees into the box. The player who gets the most frisbees in the box wins a prize.

You can begin this activity at the arts and crafts table before moving it to the games area.

Cover the table with newspaper and put aprons or old shirts on the kids. Allow the children to paint their rocks with the glow in the dark paint. Once the rocks are dry, hide them around a large room and turn off the lights. Allow them a specified time to search for the moon rocks. The one who finds the most wins. 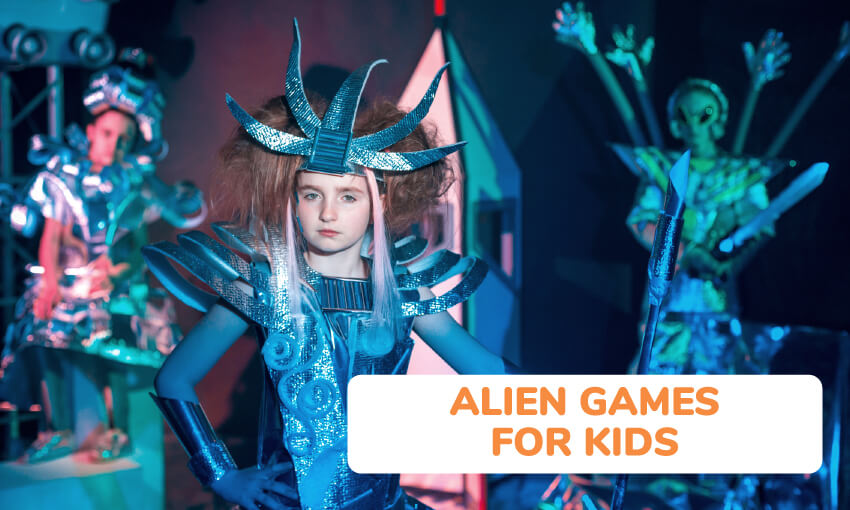 Here is another activity that can easily start at the arts and crafts table and end with playing a game.

At the arts and crafts table, let the children use their creative skills to decorate the bottles with the available supplies. They can put alien stickers on them, use glow in the dark paints, or draw pictures on the bottles, whatever their creative minds can come up with will work with this activity. Once the bottles are ready, pour a little sand or dirt into the bottom of each one so that they will stand securely (make sure the bottles have lids on them). Transform the bottles into bowling pins by lining them up as such. Allow each player to have a turn knocking the “pins” down using a rubber playground ball. The player who knocks down the most wins.

The children should form two single file lines. These two lines will consist of the “stars”. Choose two of the children to be the “star catchers” and put them in between the two single file lines. The first star catcher should say, “star light, star bright.” The second star catcher should then say, “how many stars are out tonight?” Once the star catchers have completed their phrases, each star should then run to the opposite line without getting tagged by the catcher. When a star gets tagged, they are out. The last two stars left standing, win the game and they become the two new star catchers.

8. Going to the Moon

While standing, the children should dance and move with the music. When the music stops everyone should freeze. Those who don’t stop moving should be eliminated. The person who is left standing at the end wins the game.

Prior to the game starting, hide the space toys inside the ball pit. Set a time limit for the game. When the game begins the children should jump in the ball pit and look for the hidden toys. The person who finds the most toys and the end of the time wins. You could offer the space toys as the gift to the winner. 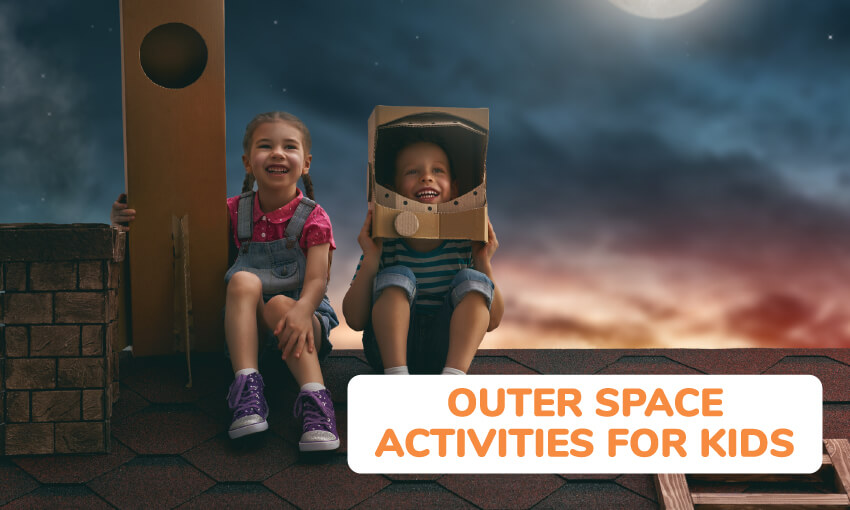 11. Pin the Mask on the Astronaut Game

This space-themed game is a must-have for your child’s party. It comes with a poster featuring an astronaut in outer space, a blindfold, and 24 masks. The object is to see who can pin the mask the closest to the one on the astronaut while they’re blindfolded. It always makes the game more challenging and fun when you spin the player once or twice before they begin. The poster will easily stick to the wall with the glue dots that are provided. Use this as a decoration before the kids begin to play.

When you incorporate a cardboard rocket ship into the party the children will not only be able to use their imaginations, but they will also have a chance to show off their creative sides. A cardboard rocket ship will also make the perfect decoration and the kids can create a space themed game as well. Provide the kids with crayons, markers, paints, glitter, and stickers, and before long, they will be making their way to space in their elaborately decorated spaceship. Dress the kids up as aliens, and they just might find themselves playing an alien game.

For a group of kids ages 7 and up you can include this fun space themed game full of trivia, true and false, and even multiple-choice questions. For 2-8 players, each player will take a turn rolling the die and answering the questions from any of the 38 game cards. With the choice of easy or hard levels, everyone will have fun learning while playing this outer space party game.

An outer space party wouldn’t be complete without the solar system present. That’s why this giant inflatable solar system should be included with your party decorations. Not only can it be used as a decoration, but it also includes an activity guide so that the kids can use it for some of the space-themed games they will be playing and learning throughout the day. This set includes all 8 planets as well as Pluto, the sun, and Earth’s moon. It also comes with a foot pump for easy inflation, and the loops for hanging the solar system from the ceiling. When the party is over your child can easily use this inflatable solar system as a bedroom decoration.

No party is complete without a pinata, so be sure you include this space shuttle pinata in your child’s outer space party. Hang it early for decoration, but be sure and fill it first with treats so the kids can have a great time breaking it open before the party ends.

Now that you’ve gone through this list of 15 outer space party games and activities for kids you will also want to consider the invitations and food you will serve for the event. Also, remember that you can ask the guests to bring some of the supplies they will need for the activities and be sure they have all dressed accordingly for the fun.

Make sure you check out our list of fun toddler party games as well as our blindfold games for youth. 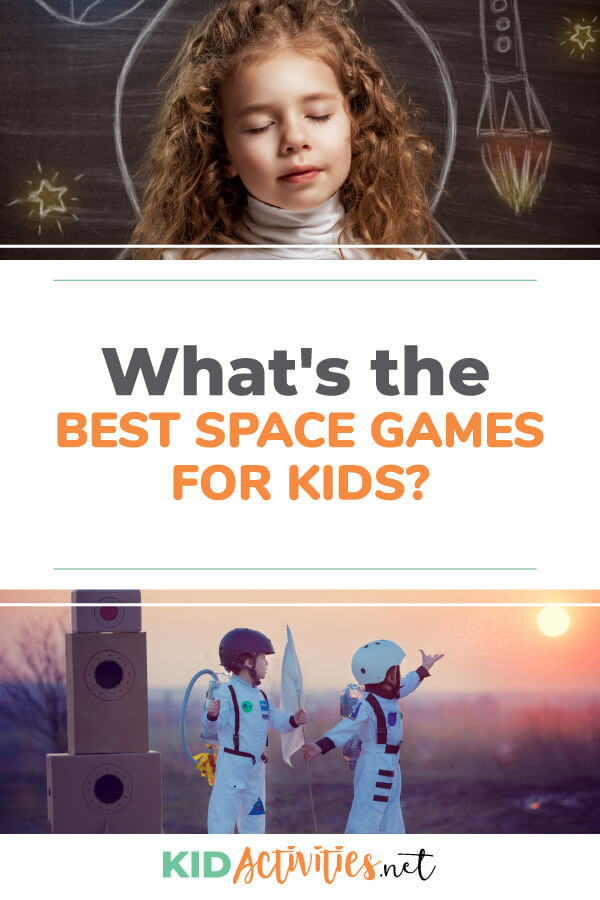 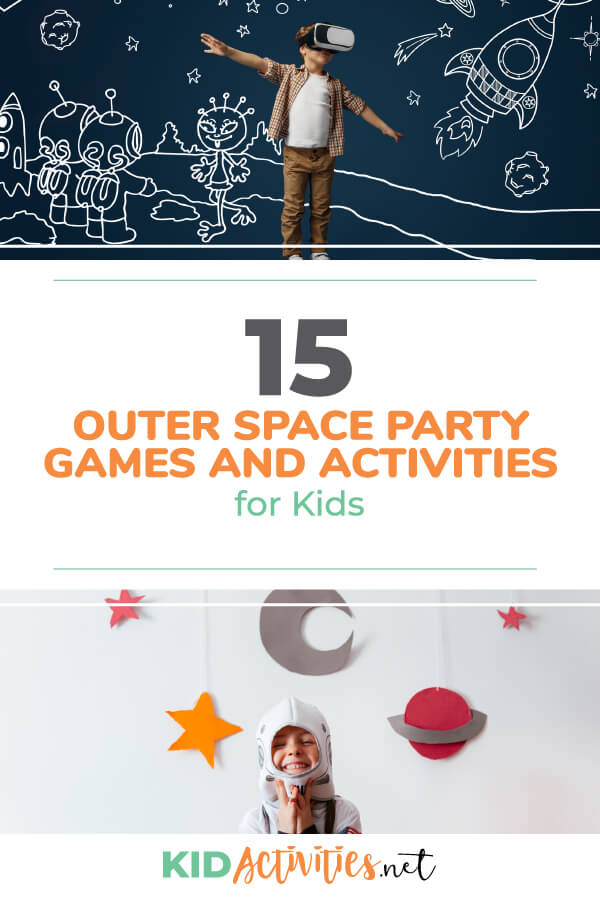