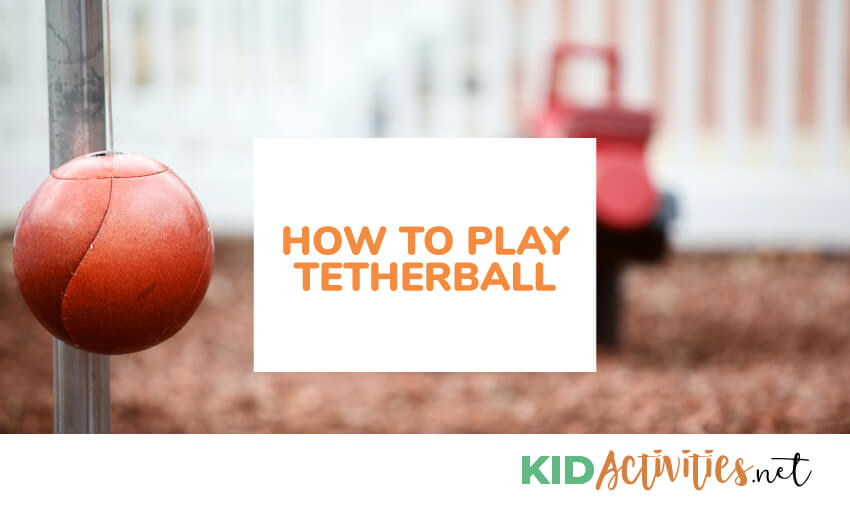 While tetherball is a playground staple, many people are unaware of how to play other than hitting the ball and watching it spin around. If you’d like to learn more about how to play tetherball, read on for a detailed description of the rules and some basic strategy tips. There are some variations possible, so it’s good to agree beforehand on which tetherball rules you are using! 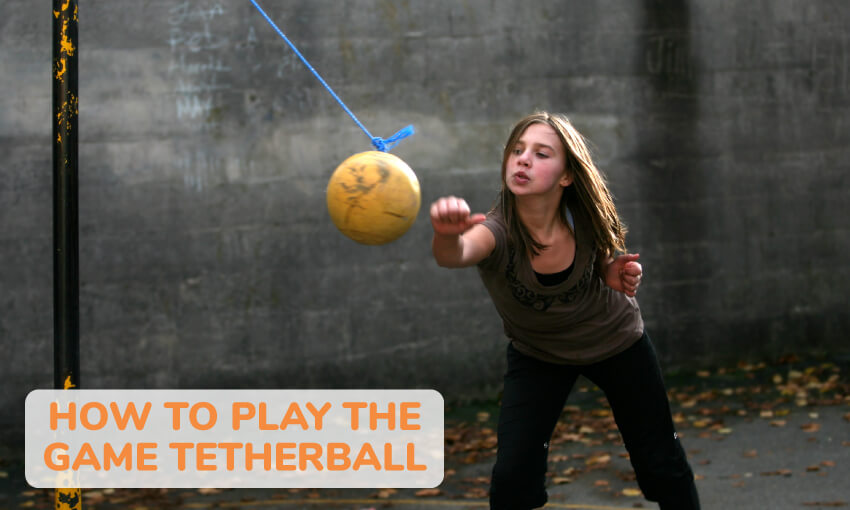 1. A tetherball court is a flat circle 16′ – 20′ in diameter, with an 7′ – 10′ pole in the center from which a ball
attached to a cord hangs. The ball should be about two feet off the ground with the cord at its longest extension. Each player takes one half of the court. 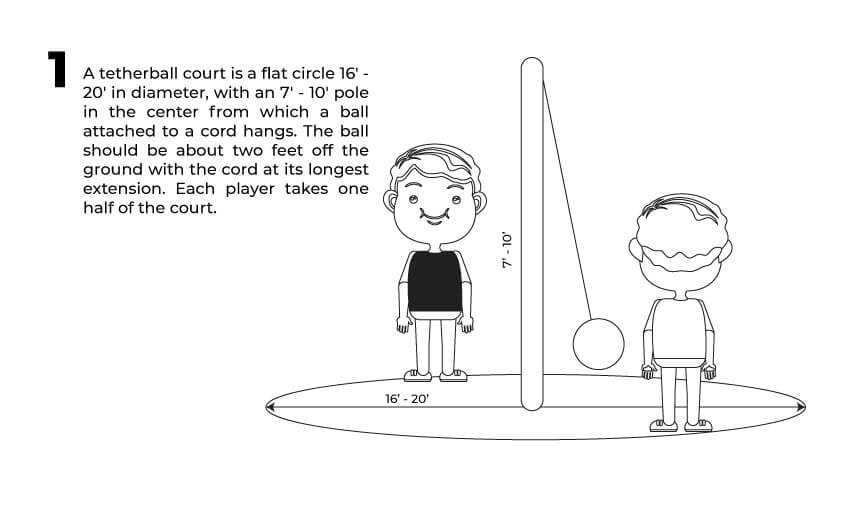 2. Players determine first serve in whatever way they desire, and alternate serves after that. The server pulls the ball away from the pole with the cord straight, and then chooses which direction to hit the ball in. Once the server has chosen a direction, the other player will attempt to hit the ball in the other direction. 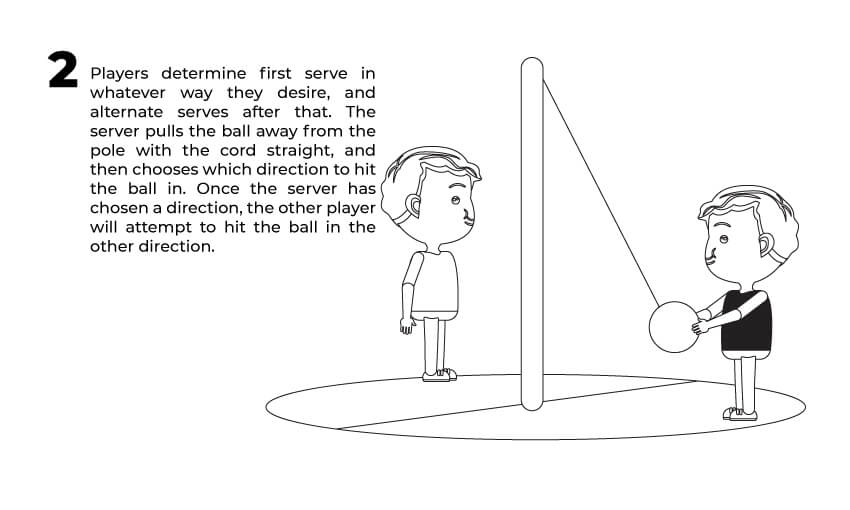 3. Optional (but recommended) rule: After the ball has been served, the server cannot touch it again until either:

a) the other player has touched the ball or
b) the cord has wrapped around the pole at least four times.

This rule is intended to make it harder for the server to immediately dominate the game by keeping the ball away from his or her opponent, and gives the opponent at least a chance to strike back. 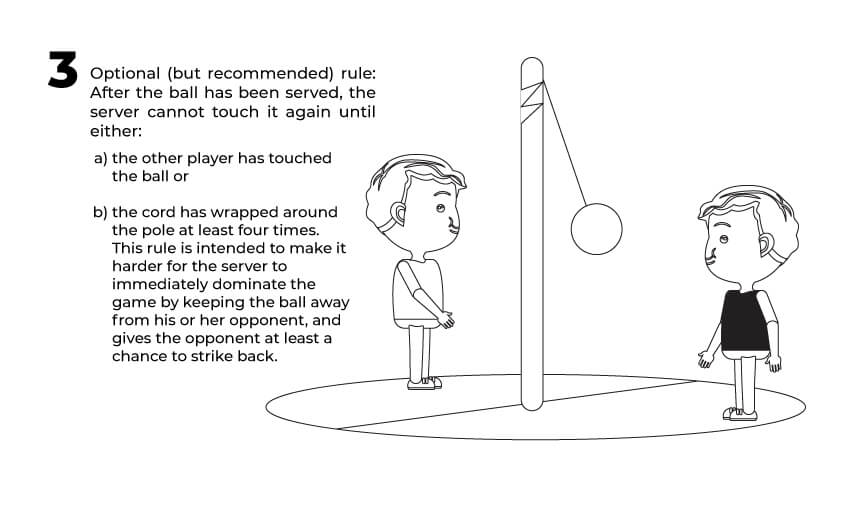 4. The object of the game is to wrap the cord entirely around the pole in your direction, until there is no more excess cord left and it cannot be wrapped any further, and the ball comes to rest against the pole. Some tetherball poles have a mark halfway up; on these poles, the cord must be wrapped entirely above the mark for the win to count. The first player to wrap the pole entirely wins the game. 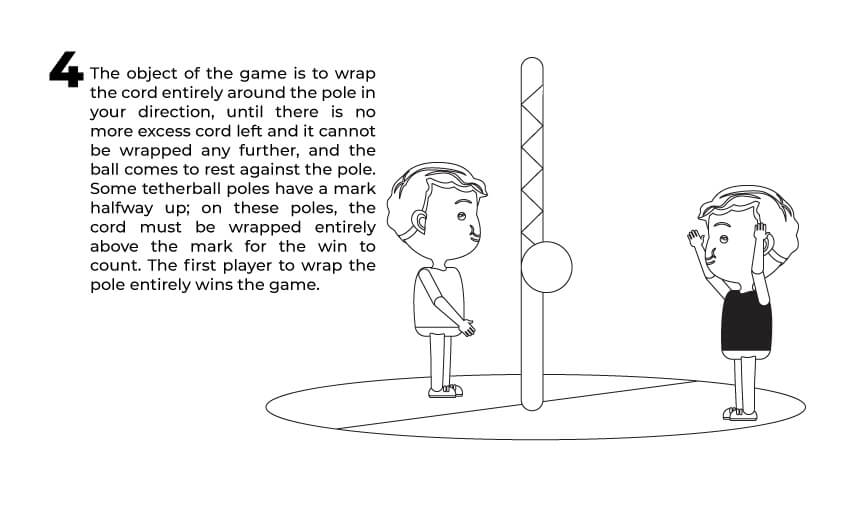 5. Most tetherball rules call for players to play for the best of seven games. Some players also prefer that the winner be ahead by a margin of at least two games. This is because there is a slight disadvantage to being the server (assuming you are using the rule described in part 3), so it’s possible for players to just alternate wins as they take turns being server. Requiring a two-game win margin means the winner will have to show some skill and luck! 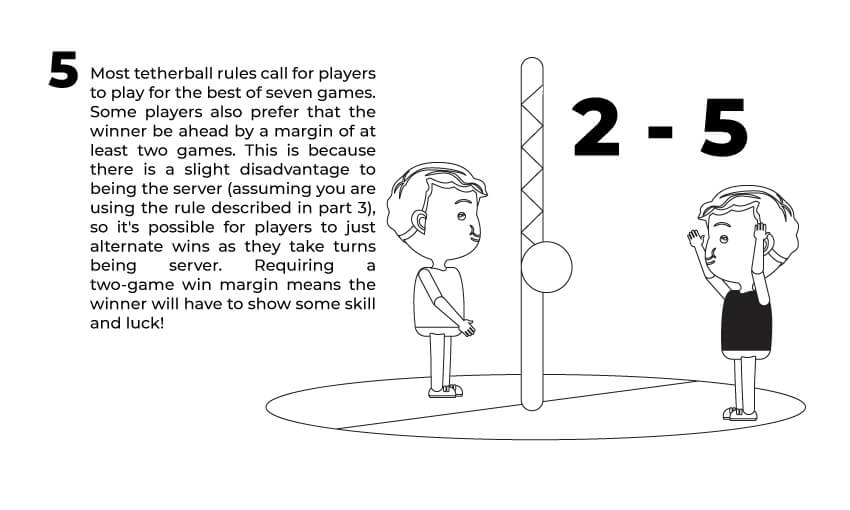 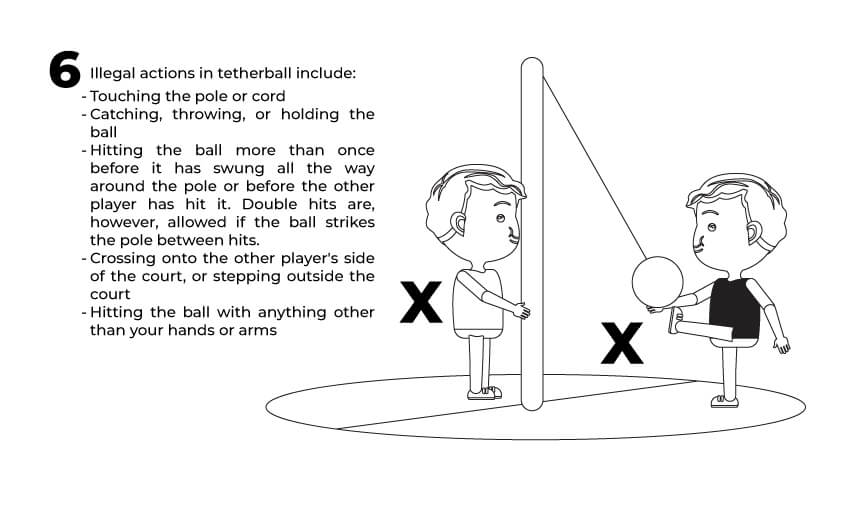 7. If a foul is committed by accident, rewind the cord to where it was when the foul was committed, and then the player who did not foul serves the ball to continue the game. If a player commits three accidental fouls, or one intentional foul, during a single game, he or she loses the game. Normally, only touching the pole is considered an intentional foul. 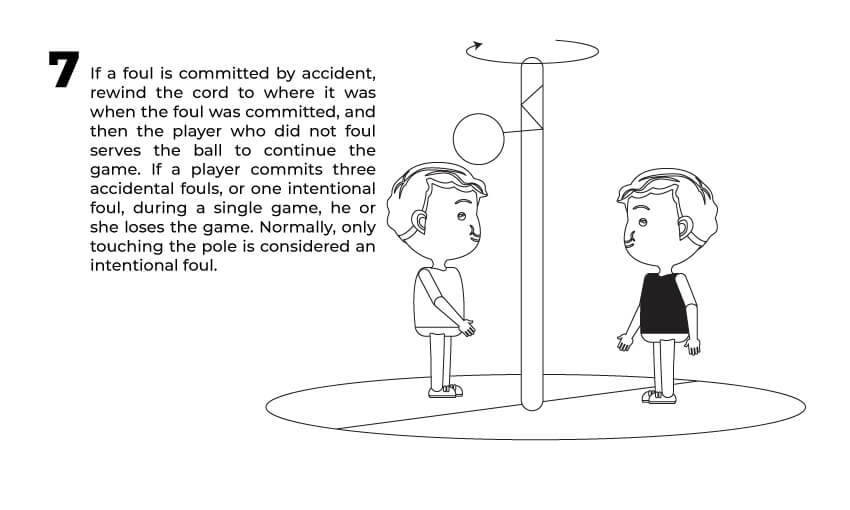 8. Instead of re-serving the ball after a foul, some players prefer to do a “ball drop.” To do this, both players take hold of the ball and pull it three feet away from the pole along the line dividing the halves of the court, and then let it fall to hit the pole. After the ball touches the pole it is considered in play again and players may try to hit it to resume the game. Ball drops can also be used if both players commit a foul at the same time. 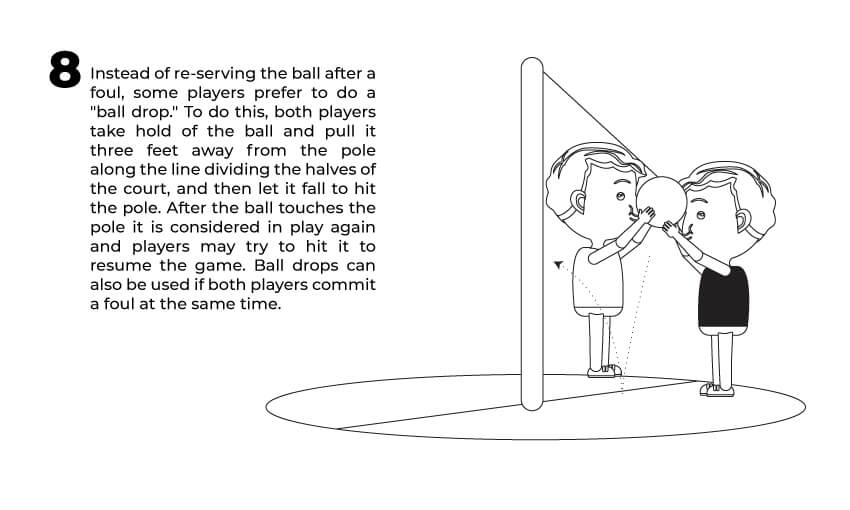 9. Now that you know how to play tetherball, consider your tactics. Being in control of the ball is vital, and that means making it hard for your opponent to hit. A good tetherball player will attempt to hit the ball at an angle so it travels in a tilted circle, low and easy to reach on his or her side but high (and hopefully out of the opponent’s reach) on the other side. It’s also important to stay moving during the game. Staying in one place makes it easy for your opponent to know where to hit the ball to keep it away from you. 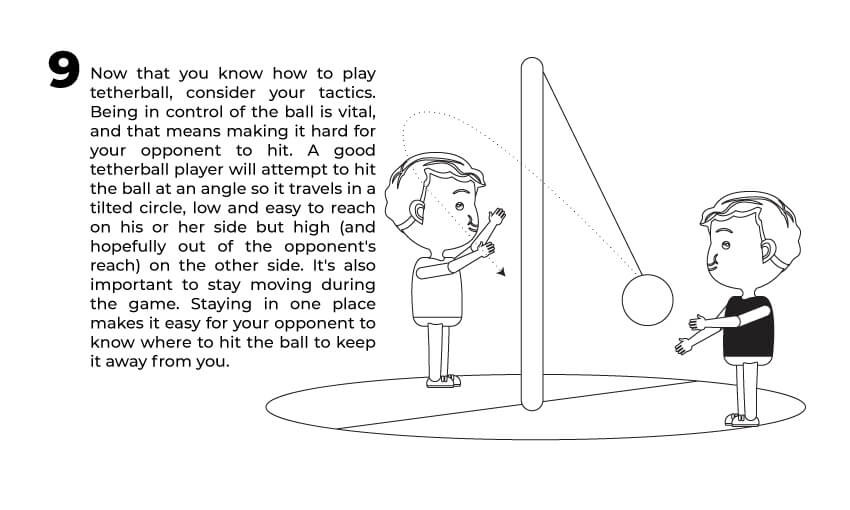 10. To improve your tetherball skills, it’s easy and fun to practice by yourself! Try serving and then returning your own serve, and experiment with different ways of striking the ball to get better at ball control. 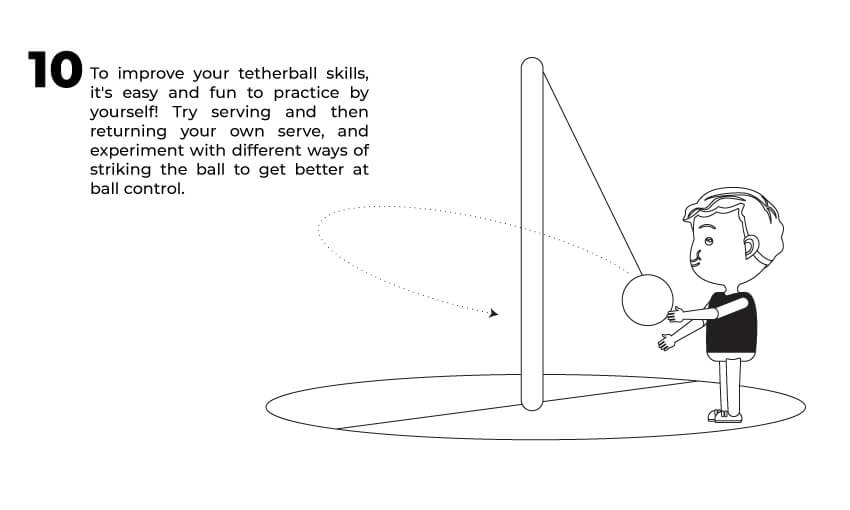