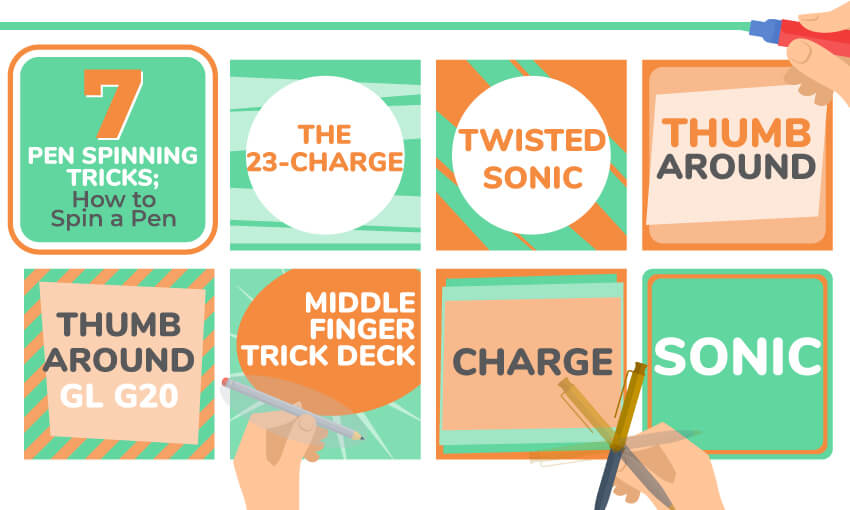 The art of doing tricks with a pen is a very hard one to master. Pen spinning tricks are the craft of masters, some of whom are fantastic at their trade. Is it impossible to learn these tricks? Absolutely NOT! Learning these tricks is hard, but it can be easily done if you pay close attention and work hard at it. We’ve included a number of tricks that can be easily done by someone who has the will. Like it’s always been said, where there’s a will, there’s a way. Just by being here, you’ve already begun your journey into the world of pen spinning and amazing pen tricks!

HOW TO SPIN A PEN

Before you can do pen tricks, you first have to know how to spin a pen. Some websites break it down in complex terms, but we can explain in terms a bit simpler than that. First, hold your pen with your index finger, middle finger, and thumb. Second, pull your middle finger back (like a trigger), moving the pen with it. Third, roll your wrist in order to make your thumb move with the grain of the pen. Fourth, move your other fingers so they aren’t in the way of the pen as it revolves. Finally, make sure to catch the pen so it doesn’t go flying out of your hand. Does this seem complicated? Maybe it is, so go ahead and practice it a lot in order to really get the feel for it. After that, go ahead and move on to these tricks.

The 23-Charge is usually one beginners start out with. First, place the pen between your ring and middle fingers and hold the end of it with your thumb. Then, push your
middle finger backwards and your ring finger forward simultaneously. After that, lift your thumb and let the pen do a 360 degree spin.

TIP
Tip time! Don’t move your hand. The work being done to spin the pen is in your fingers, or sometimes in your wrist. Your hand should remain steadfast and strong while the pen is spun. Moving your hand can cause you to lose coordination and it will ruin the trick. That being said, let’s get back to the tricks.

Interesting name. This trick builds on your knowledge from doing Thumb Around earlier, so make sure you’re confident with that before attempting this one. First, hold the pen between your middle and index fingers. Keep it steady, and make sure the tip is pointing outward (i.e., away from your hand). Second – and maybe most important – is pushing your ring and pinky fingers down into your palm, so they don’t intercept the pen as you try to spin it. Third, push forward with your middle finger and push back with your index finger. This will move the pen to a position where you can catch it in between your middle and ring fingers. Fourth, push your index finger down so it doesn’t block the next flip. Simultaneously, bend your ring and middle fingers down (make sure they’re still holding the pen!) to avoid interference. Now finally, bend your pen around your ring finger by applying pressure from both your ring and middle fingers. After that happens, extend your middle and index fingers and catch the pen between them! Voila – a completed trick.

This is another fundamental trick. If you learn this one, you’re on your way to learning others as well. First, position your pen. In this case, hold it at a slant between your middle and ring fingers, and push the back of the pen behind your thumb. Lightly press your middle finger down, and push the pen off with your thumb. While doing that, move your index finger inward – towards your ring finger. (It’ll be good for catching the pen at the end of the trick.) Let the pen rotate between the index and ring, and as it’s rotating, bring up your middle finger. Using your middle and index fingers, catch the pen as it finishes it’s rotation. Easy!

Another basic fundamental that every pen spinner should know. Position the pen like you would in a sonic – between the middle and ring, with the back behind your thumb. Now, stretch out your fingers while bending the ring finger backwards ever so slightly. Let the pen slowly rotate 180 degrees (upside down). When it does that, push the ring finger forward, and push your middle finger backwards. As the pen flips, catch it between your thumb and index finger!

Now that’s a badass name! The Twisted Sonic builds on the knowledge you’ve already acquired from the Sonic and Charge tricks, and thus is very similar. First, get the pen in the same position as those two tricks (between middle and ring fingers, back of pen behind your thumb). Next, like Charge, bend your middle finger back and stretch out all of your fingers. Let the pen rotate itself into being stuck between your index and ring fingers and your middle one. The pen will keep rotating now, and as it does, pull back your index finger so the pen’s full rotation ends between your index and middle fingers. In text, this trick sounds complicated, but it really isn’t.

The Sonic Rise is one of the most extreme pen spin tricks out there. It’s very complex, and maybe not for beginners, but we’d be remiss if it weren’t included here somehow. Now, due to it’s complexity, it’s quite hard for us to actually list it out step by step, so instead we’ll link you to this:


So, what do you think? Pretty good pen spinning tricks, and not all that complicated to learn, really. Maybe you won’t get it the first time around. That’s fine. The old phrase is “practice makes perfect” and it really is true. Keep working at the trade and your skill level will gradually increase. With the information provided here, and the videos we’ve linked to, you’re on your way to becoming a pen spinning master!

If you feel confident enough already, or if maybe you just want to be entertained, here’s 100 pen tricks to try out on your own, though we did cover some of them here.