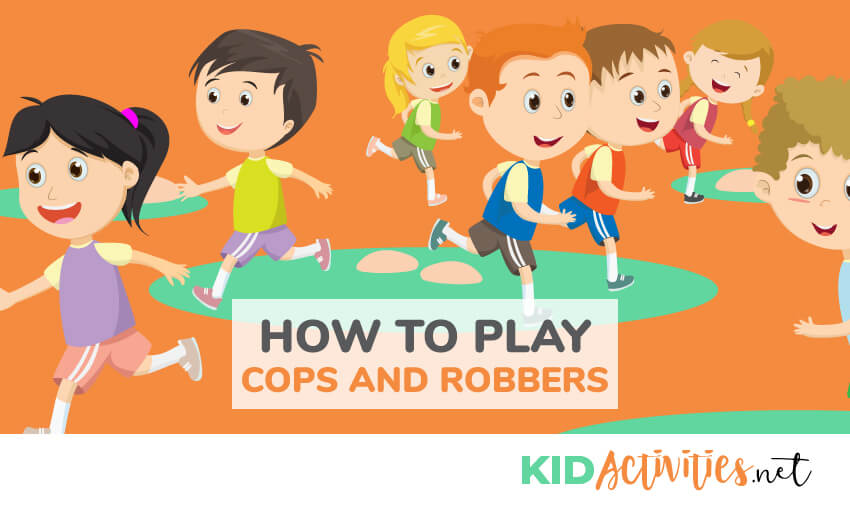 How to Play Cops and Robbers

Cops and robbers for kids can be played either inside or outside. This game is a classic and it is a great game that can be used to play for physical education, better known as PE or gym class. Learning how to play cops and robbers can be just as fun as playing the game itself. It works out perfect for an hour class because the game takes about 20 minutes to play, giving the children plenty of time to enjoy themselves.

Cops and Robbers game rules are very simple and easy to follow. There are just a few items that are needed to play the game. Different items can also be used but this is only a suggestion which most schools use. Some of the items are used on a regular basis for different games, so most schools should already have them.

Setting Up the Game 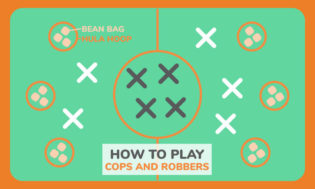 1. The hula hoops should be placed all over the gym or the grounds outdoors. Try to avoid putting them too close together.

2. Divide the bean bags up equally and place them inside the hula hoops on the ground.

If the game is played inside the gym, have first half stand in the middle of the gym together as a group. This team will be the robbers. The other team should be throughout the entire gym and not kept as a group. These will be the cops.

The point of the game is for the robbers to run around the gym and not get tagged by the cops who will be chasing them diligently. The robbers have to run and grab as many bean bags, which would be considered the “loot,” and bring it back to the home base safely without getting caught by the cops.

If the robber runs to the hula hoop and has the bean bag in hand, as long as they stand inside to hula hoop they are considered safe and cannot be taken out the game. One robber at a time at the hula hoop is all that can stay inside. If the robber can make it to the safe zone with the so-called “loot,” which is the bean bag, then they just simply drop the bean bag down and take off again to grab some more bean bags.

The game ends once all the robbers have been caught and sitting down. Sometimes the game goes a little longer than expected if there are faster robbers than cops, then the game can be timed since gym class only last an hour. Sometimes the player calls it quits once all the bean bags have been taken out of the hula hoops which would probably mean the bank goes bankrupt.

If the bean bags are gone and all in the safe zone, the robbers win the game. If all of the robbers are sitting down, then that means they have all been arrested and the cops win the game. Once either of these happens then the proper thing to do is have the cops and robbers switch places and play the game again. This allows each team to play both sides of the game.

On the Playground or Anywhere Outside

Here is how to play cops and robbers if it is outside on a playground or even in the woods. It can even be jazzed up and turned into a maze game. If playing outside, a tree, a playground set, or any large item outside can be considered the safe zone where the robbers cannot get caught and bean bags can be dropped off.

It is always best to use something big and round like a hula hoop to put the bean bags in but anything can be used or modified. The same rules apply for playing Cops and robbers for kids just about anywhere.

If the game is played as a maze or like the other close games in which cops and robbers are related to like Hide-and-Go-Seek, then the cops would count slowly to 15 before beginning the chase. This would help make the game more realistic since the robbers almost always have a little bit of time to get away at the beginning of a chase.

To make it even funnier before the start of the game when the cops are counting to 15, they can be counting from inside of the jail. The game of Tag is also closely related and almost has the same rules as Cops and Robbers and Hide-and-Go-Seek.

It is always important to remember the age barriers in children and the older children can sometimes be a little rougher than the younger ones. It is best to always separate them according to these age groups. Six to nine years old should be one group of kids. Nine to twelve years old should be another set of kids. It is very rare for teenagers 13 and up to play this game but there is certainly nothing wrong with it if they choose to do so. The same rules would apply. It doesn’t really matter how many kids play this game. This is a great game for small groups of kids as well as large groups.

Some of the fundamental skills that go along with cops and robbers is dodging, jumping, and running. Some of the other skills it takes to play this game is endurance and speed. The endurance comes from never giving up, and running for long periods of time. These types of games get the blood flowing and generate a good form of exercise for kids today.

Sometimes a stipulations can be added where the robbers can break the prisoners out of jail. If the robber can get to the prisoner and touch their hand this would set the prisoner free for them to continue the game. This would be a fun version, but this would work best if it’s done outside and has more time than just an hour to play.

For the safety side, every person in charge should always keep this in mind. Safety should always come first no matter what. It should be made known to the children not to push, or shove, or throw anyone to the ground. Kids can get a little rowdy sometimes, so it is always best to remind them it has to be a tag only game. Like many sports are games everyone should stretch before doing such activities. This will allow the muscles in the legs and arms to stretch before they cramp up which can cause severe discomfort or possibly more injuries.

Cops and Robbers for kids can be really fun and can help pass the time while keeping the children fit and in shape. If one follows these Cops and robbers game rules, then everyone will remain safe and enjoy themselves in the process. These rules have been around for a long time and if the gym teachers continue to keep this game alive in schools then it will be around for a really long time for other kids to enjoy.