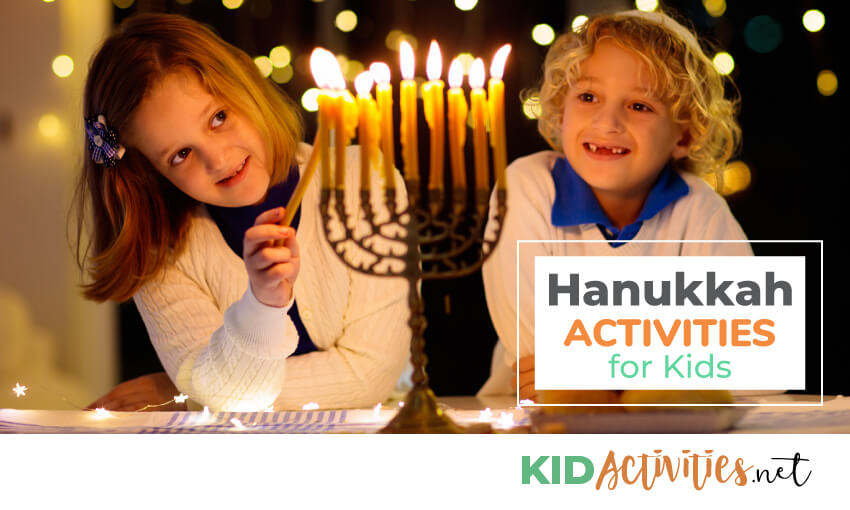 Hanukkah or the “Festival of Lights” is celebrated by Jewish families for eight nights (it’s almost always in December.) During this time, Jewish families exchange gifts with each other. They light one candle each night on their menorah-until all eight are lit. Hanukkah is explained further at page bottom…  Updated December 2016

Hanukkah starts on the Hebrew calendar date of 27Kislev–and lasts for eight days.

1. Cover the tubes with wrapping paper. The center “candle” is covered in white paper.
2. Decorate the middle tube with sequins.
3. Place the muffin/cupcake cups at the bottom of each tube and rubberband to fit tightly.  Fold down the top of the muffin cup so that candles will fit close together.
4. Wrap the long box that will be the base of the Menorah in wrapping paper.
5. Center the middle candle on the box and glue it down.
6. Place the other eight candles onto the box with four on each side and glue them down.
7. To make the flame, cut pieces of yellow cellophane, red, orange and yellow crepe paper and tape them together.  Place each flame inside of the candles and attach with tape. Idea and photo from the Kansas City Public Library

FYI:  A Hanukkah menorah (otherwise known as a hanukkia) has nine candles. Eight of these are the Hanukkah candles, and one is the shamash – the “assistant candle” that is used to light the others. On the first night, families place one candle in the Menorah’s far right (as you face the Menorah) candle holder. Another candle is placed for the Shamash (helper candle) The structure of the hanukkiah: the shamash is not in a line with the others. It is either above the other eight or off to the side. A menorah in use in the Temple had seven branches.

Put paint on tray.
Have children dip dreidels in paint (as many colors as you choose) and spin them on paper. Paper can be left in normal oblong shape–or cut in the shape of a dreidel. No two art pieces will be the same!

MAKE A MENORAH BULLETIN BOARD…

Create a classroom or program menorah by using strips of blue construction paper. Place a strip of paper horizontally (________) on the bottom of the board to form the base. Staple a strip that is perpendicular (vertical) to the base and attached at the very center. Next, staple a third strip -the same length as the base – and parallel/horizontal to the base. (This is the top that the candles are attached to)

Write ‘Happy’ on the top strip-and ‘Hanukaah’ on the base strip! On each of the eight days, have a child draw in one candle on the menorah. (Or place a pre-made construction paper candle with flame)

Time is a difficult concept for young children to grasp! One fun and easy way to count off the days is to make a Holiday paper chain.  Start on the appropriate date…and each day remove one paper loop! If you are a teacher/caregiver–make one with each child to take home–be sure to include directions for parents! (You could also do this in your classroom or program to count down the days to winter vacation!)

1. Have adult cut paper strips from construction paper. Make strips approximately 2” x 8”.
2. Staple, glue or tape strips as you would any paper chain.
3. Depending on the amount of days to Hanukkah, number the loops 1 up ______. (The highest number will be at the top of the chain and 1 at bottom)
4. Hang the chain from a doorway or hook.
5. Each day remove one loop from the chain. Before you know it– the big day has arrived!

NOTE: This sample was made using four full pipe cleaners…the same above directions were followed. I think it would be easier for the children to handle-cutting the pipe cleaners in half.

Make a Holiday Banner for your Room!
It can say: HAPPY HANAKKAH! JOY! PEACE! (whatever…)

Discuss with children what you would like the banner to say and what the design, technique, etc. should be.

1. Fold both ends of paper over twice (about 2″) and paste or staple the bottom fold.
2. Cut out pieces for the banner (the words or word and pictures) from the construction paper.
3. Arrange the design on the butcher paper.
4. When you’re satisfied with the design, glue the pieces down.
5. Attach the doweling to the top of the banner with paste or staples. Add yarn and hang.

Cut a banana in half and slice it down the middle lengthwise.
Have children take 8 pretzel sticks and place them in the banana; the pretzels, which are standing upright are the candles.

1. Spread  bread with cream cheese or peanut butter.
2. Press carrot coins into the spread for the base of the menorah.
3. Next place pretzel sticks above the carrots for  candles and then the raisins as flames.

1. Grate potatoes and measure 3 cups. Combine the grated potatoes with the onion, egg, flour and a dash of salt and pepper. Mix gently.

2. Put 1/2″ oil in heavy skillet. preheat oil. Drop 1 Tbs. potato mixture into pan for each pancake. Flatten with a spatula. Fry each side until golden.

MAKE SOME EASY CROCK POT APPLESAUCE to go with the Latkes!

1. On the flat side of a chocolate kiss- attach a mini marshmallow with frosting or peanut butter.
2. Insert a pretzel stick into the marshmallow.
3. The children can then spin an edible dreidel! (Or just eat!!!) Be sure you have extra pretzels on hand to munch while making them!

Have  kids use blue icing (shiny icing that comes in a ready-to-draw tube) to carefully write “nun,” “gimel,” “hay” and “shin” on the sides of a large marshmallow. You can see how to make the Hebrew letters at Virtual Chanukah. (If that’s too messy–or too much work– decorate the dreidel with some dots and stripes.

Note: This idea has been brought over from the “former” site After-School-Care.com–however– since posting it, I came across this photo and activity extension at Nickelodeon’s Parent Connect.

1. On the flat side of a chocolate kiss- attach a large marshmallow with frosting or peanut butter.
2. Insert a pretzel stick into the marshmallow.
3. The children can then spin an edible dreidel! (Or just eat!!!) Be sure you have extra pretzels on hand to munch while making them! (Image by KidActivities.net)

One of the most popular Hanukkah pastimes is playing the dreidel game. It is a form of an old German gambling game; Its name comes from the German word for top.

Need:
A dreidel (a little wooden or clay top) The top has four sides, each marked with a Hebrew character: Nun, Gimel, Heh and Shin.
Wrapped chocolate, pennies, buttons, nuts, etc. (Usually 10-15 of your ‘choice’ is given to each player)
Pot or other container

To Play:
Evenly divide the betting objects among all players.
Before every spin of the dreidel, each player places one item into the center (pot.
The first player spins the dreidel. The top has four sides, each marked with a Hebrew character: Nun, Gimel, Heh and Shin.

Depending on the outcome, you give or get game goodies from the pot– before the next person spins. At the beginning of each round, every participant puts one game piece into the center “pot.” In addition, every time the pot is empty or has only one game piece left, every player should put one in the pot.

The game is over when one player has everything and everyone else is cleaned out.

QUESTION: Where can I purchase a dreidel? Looking on line, dreidels can be found at Oriental Trading Company, Target, Amazon.com. and Walmart

I play with my new dreidel
upon the shiny floor.
I ask some friends to play with me-
we must have two or more.

I give the players pennies-
the same amount to each.
We sit down in a circle,
the pennies within reach.
Each player puts a penny
in the proper spot.
The middle of the circle
is what we call the pot.

Next I take the dreidel
and spin it round and round.
Which letter does it land on?
What fortune have I found?

I read the letter facing up-
it tells me how to play.
The letters are in Hebrew,
and here is what they say.

Nun means I do nothing-
I neither give nor take.
Heh means I take half the pot-
what a lucky break!

Gimel means I take it all.
It looks as if I’ll win!
But I must put a penny back
when it lands on shin.

We go around the circle-
it’s lots and lots of fun,
till one has all the pennies.
Then the game is done!

These books may be found at your local public or school library–also at Amazon.com

The joyous festival of Hanukkah begins on 25 Kislev of the Jewish calendar. It celebrates two miracles –a great Jewish military victory and a miraculous supply of oil for the Temple.

Hanukkah marks the Macabees’ long-ago defeat of the much-larger Greek-Syrian army that had invaded Israel. The Macabees were just a small group of Jews led by Mattathias and his five sons, including Judah Macabee. But they organized themselves into a guerrilla army and, with God’s help, proved stronger than their powerful enemy.

Following the Macabees’ victory, the Jews rededicated the Holy Temple in Jerusalem and, once again, were able to worship freely.

Although Hanukkah celebrates a military victory, its major symbol “the Hanukkah menorah, or hanukkiah” reminds us of the miracle of the oil. As the Jews purified the Holy Temple, they found only one flask of the oil for the eternal lamp–enough to keep it burning for just one day. But a miracle occurred, and the oil lasted eight days and nights until more oil could be brought from afar. That miracle explains why we celebrate Hanukkah for eight days and also why Hanukkah is called the Festival of Lights. Information Source: International Fellowship of Christians and Jews